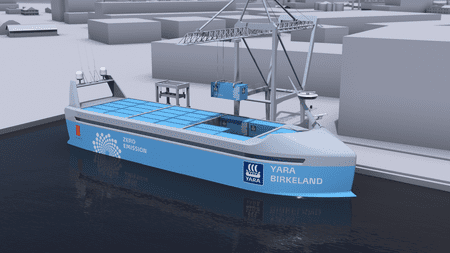 A Norwegian company is building the world’s first crewless, automated ship, and it’s set to launch next year.

The Wall Street Journal reports that the Norwegian-built ship is expected to be fully autonomous by 2020. The Yara Birkeland will use GPS, cameras, sensors, and radar to navigate and dock on its own. The ship will also be emission free.

Yara, the company building the boat, announced it was working on the ship back in May.

“Every day, more than 100 diesel truck journeys are needed to transport products from Yara’s Porsgrunn plant to ports in Brevik and Larvik where we ship products to customers around the world. With this new autonomous battery-driven container vessel we move transport from road to sea and thereby reduce noise and dust emissions, improve the safety of local roads, and reduce NOx and CO2 emissions,” Svein Tore Holsether, President and CEO of Yara said in a statement at the time.

The ship is expected to cost around $25 million to build, around three times the price of a comparably-sized container ship, but as it won’t require a crew or fuel, the operating costs will be up to 90 percent lower.

The Yara Birkeland will start out life as a manned vessel, and will then be remotely operated in 2019, before becoming fully autonomous in 2020.

The ship has been dubbed the “Tesla of the Seas,” and is being developed in a joint venture between Yara and technology company Kongsberg Gruppen. When it does begin operations, it will be delivering fertilizer.

“By moving container transport from land to sea, Yara Birkeland is the start of a major contribution to fulfilling national and international environmental impact goals. The new concept is also a giant step forward towards increased seaborne transportation in general,” says Geir Håøy, President and CEO of Kongsberg.