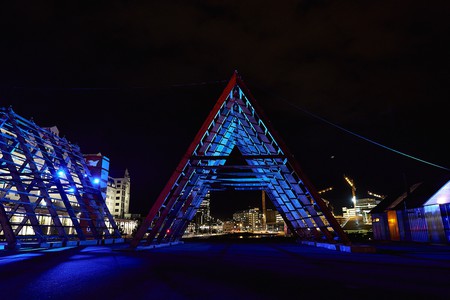 The SALT pyramid in Oslo |© Baard Henriksen, Courtesy of SALT

If you’ve visited Oslo in the past year, you’ve probably noticed a strange pyramid dominating Bjørvika, right across the Oslo Opera House. If you’re a local, you probably know that this strange pyramid houses SALT, a traveling art project that will be gracing Oslo until 2018. Under its emblematic roof, shaped to bring to mind traditional fish racks, SALT hosts concerts, cultural events, and some very unique sauna sessions. We spoke to Erlend Mogård-Larsen (founder and project manager) and Eirik Wilhelm Thorsen (who handles marketing and communication) to better understand how SALT brings together history, nature, art, and well-being.

What sparked the idea for SALT?

E. M. L.: The idea was to make a unique cultural platform—creative, historical, environmental and communal—that brings together art, architecture, music, and food. At the center of it all is hesjen, a pyramid-shaped fish rack that, for hundreds of years, has been a symbol of the way people lived in Norway’s northern coastline. Fish were dried on that pyramid-shaped rack, then prepared for export. Dried fish was a very durable and sought after commodity, and its trade generated great wealth. The construction thus enabled new connections with other parts of the world. For thousands of years, people have followed the movement of animals and the seasonal rhythms in the Arctic landscape. SALT is inspired by, and moves in that same Arctic landscape with care and respect.
E. W. T: SALT refers to our Norwegian heritage—it tells a very important story about the sea, the coast, and where we come from. Especially with today’s climate challenges, topics like the ocean, the environment, and the very origin of humans may be more important than ever. But at the same time, SALT is very down to earth and with such a great atmosphere that talking about these important topics feels right in SALT’s surroundings. 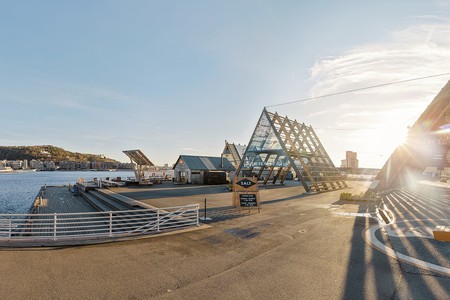 Did you always know that SALT would be a nomadic, slow festival, or has the concept evolved over the years?

E. M. L.: SALT started its journey in 2010 in Svolvær, Lofoten. Then in 2014, the Northern Norway-SALT project lived for a year on an Arctic beach on the mountainous island of Sandhornøya, south of Bodø, before visiting Bergen in 2016. In 2017, SALT launched in Oslo as a space where visitors can engage their mind, body, and soul: a continuous, year-round art diary of cultural experiences, both indoors and outdoors, from site-specific art installations to fireside storytelling, readings, lectures, conferences, and debates, and from music (including classical and contemporary concerts, club nights, gigs, theatre, and experimental performances) to child-friendly events and meditation programs.

What made you decide to extend SALT’s stay in Oslo?

E. M. L.: The main reason is that here, the project and philosophy behind SALT can reach out to a larger audience.
E.W.T.: When it’s only a five-minute walk from the Oslo Central Station, it’s just about getting people down to the docks to experience this place. Even as a tourist, it is absolutely perfect to get such a Nordic nature and art experience with the urban Oslo and the Opera as a backdrop. The location is very, very good. 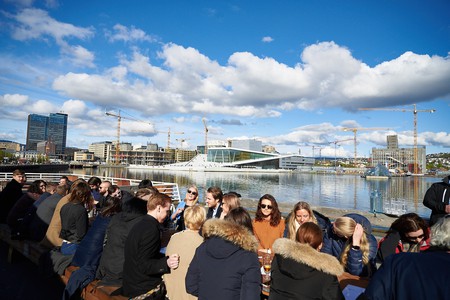 The SALT location, just across the Oslo Opera | © Baard Henriksen, Courtesy of SALT

How is the SALT crowd vibe in Oslo different from the other cities?

E. M. L.: The projects taking place in each city are so different, it’s hard to compare them. But, for instance, to sit alone in a sauna in the Arctic, listening to a soundtrack created by Biosphere specifically for the room you’re in, and watching the sun go down behind the mountain in Lofoten…that was a very unique experience. 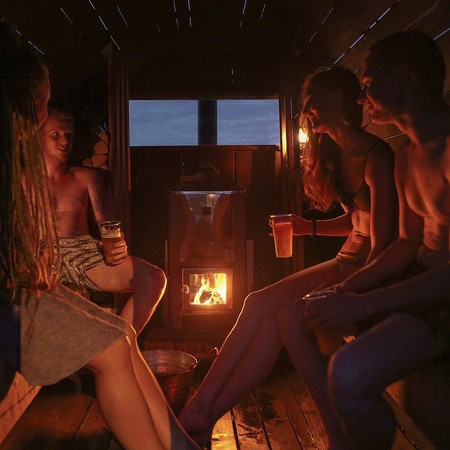 Regarding your Sauna talks series: Did you expect that people would love listening to lectures, or watching performances while sweating in their bathing suits?

E. M. L.: We didn’t—it’s been popular! But the main sauna, Àrdna, reaches approximately 65 degrees Celcius when all fired up, so it’s really comfortable. And even if you don’t like the lecture or the film we are showing, you can go for a dip in the cold water or have a sauna in the barrel. 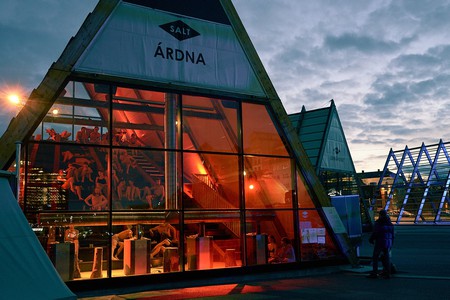 The main sauna at SALT | © Baard Henriksen, Courtesy of SALT

Within these two years in Oslo, is there a particular moment or event you remember more vividly?

E. M. L.: I overheard a mother saying to her daughter, while they were standing under the 65-meter-long Arctic Pyramid, “This is where we come from.” I was touched by that. She got it, she got the point.

Norwegian nature and natural landscapes seem to play a big part in both the way you approach building your festival space but also in the kind of sounds/artists/events you gravitate towards. Do you perceive art as an organic thing, a seamless extension of our surroundings?

E. M. L.: I want art to be both organic and political. If we manage to enhance the environment with art, then we have done something right. Art should also send a message, political or not: make people lift their eyes from their phones and think. The pyramid-shaped fish rack of SALT is a memory bank—speaks of where we come from, our culture, the coastline, and the ocean. We know little about the consequences of climate change and the effects of environmental pollution on the Norwegian coast. What we do know, however, is that if we are to reach climate change mitigation goals and achieve sustainability when it comes to managing the ocean’s resources, we must change our view of the ocean and the way we relate to it. 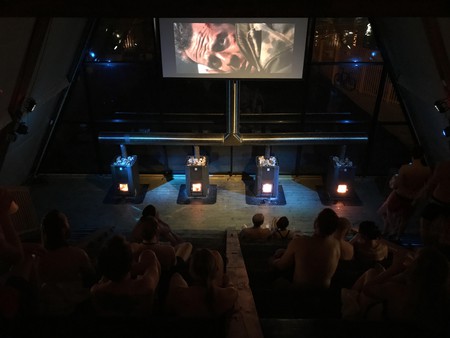 Movie night at the sauna | © Morten Høylo, Courtesy of SALT

Do you see SALT migrating to other Scandinavian countries in the future?

While you’re still in Oslo, what are your favorite things to do in the city?

E. M. L.: In the autumn, mushroom picking. In the winter, skiing through the Nordmarka. A bike ride along the Akerselva is also a lovely way to spend the day—Oslo has become an interesting and big city, with a lot of things to offer.
E.W.T.: The Emanuel Vigeland Museum (brother of Gustav Vigeland, the artist who created the sculptures in Vigeland Park) is really a cool piece of art and a hidden gem. The acoustics in the room are fantastic and have been used by Norwegian musicians like Susanne Sundfør and guitar extragavanza Stian Westerhus. I would also recommend Pjoltergeist, a restaurant with such creative, tasty, and fun food that all the top chefs in Oslo like to eat there. Oh, and the new Golden Chimp at Tøyen serves really fresh and tasty dim sum.