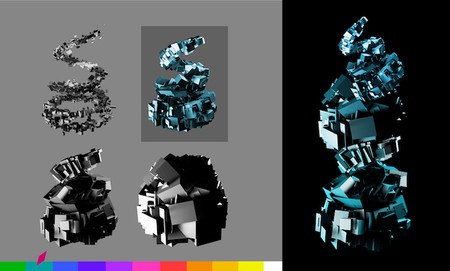 Meet Pia MYrvoLD, the Norwegian contemporary artist and designer who’s making a name as one of New Media Art’s budding talents. As part of her ART AVATAR project, she turned one of Centre George Pompidou’s exhibition rooms into an interactive and immersive artistic environment combining contemporary art and cutting-edge technology.

Tell us about the first moment you knew you wanted to be an artist.

When I was 17, I was an exchange student with AFS in Santa Cruz, California. I took all the creative art classes I could and I fell in love with canvas painting with oils. I also had a great teacher who encouraged the natural way I was handling paint and who gave me the courage to choose this path. 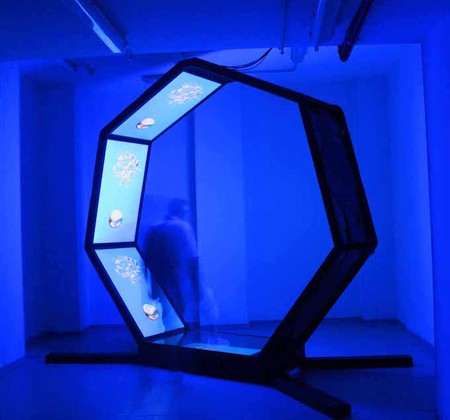 How would you describe your work to people that are viewing your art for the first time?

I always introduce myself as a painter, but also as an artist making multi-surface art works. I have extended the canvas and the palette to include interactive media, video and editing as I translate the experience of painting into various media and life situations.

You are renowned for using various media — sculpture, video, paint, and so on. Do you have a favorite medium or technique? How have these techniques developed over time?

In the early 1980s, I was introduced to interdisciplinary philosophy by my artist boyfriend. It was a perfect setup for me, as I started to explore all medias simultaneously — making my own clothes, my own music, my own art and design; the world I was making became a gestalt environment. Video, sounds and electronic media were then a natural extension, along with performance and the intellectual notion of art as a vector in society to bring on positive change. I embraced the internet for this reason — the way knowledge could be accessed for free by everyone, and how we could for the first time produce and distribute content.

Being an artist is both an internal and an external journey. The struggle is often in the external world, where you need to implement ideas and make them successful. The internal journey depends on your ability to realise ideas, to test them out, to experience the process. The debt of the process gives birth to new instincts and new impulses — it is in this discovery that I find most joy as an artist and the source of strength to go on, even when it might be difficult to find the necessary support. This struggle remains the same for most innovators and pioneers, it is often an ungrateful position. I am very optimistic and believe that things can happen in my own lifetime. After all, our life is a canvas — we just have to paint it. 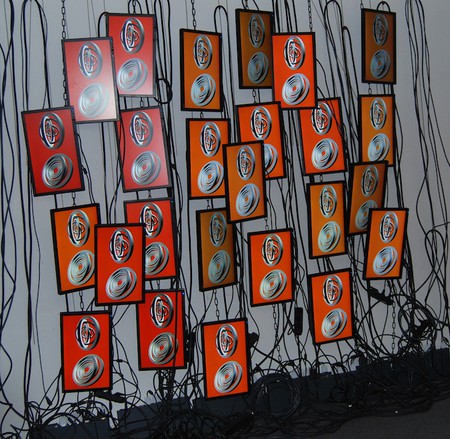 You were born and raised in Norway, but now spend your time between New York and Paris. Why the move? And how have these three places influenced your work?

Norway is a fantastic country, social democracy and is rich with oil and natural resources. When I was a kid, I grew up with a prime minister and more than 50% of the cabinet being women. Yet being a young female artist with radical ideas was difficult in a country that did not have a mature art culture. It was France and Paris that recognized my work as being original and of high quality. This encouraged me to stay in Paris, where the art world with its writers, philosophers, artists and curators are on a very high level. It is always a tremendous revelation to meet the professionals in this city, to know the depth of their knowledge, the history they belong, and their expectations and knowledge of great art and great artists. Yet in France it can be harder to enter the commercial market — female artists have to be 10 times better to receive the same financial power as their male artist pals. This is another glass ceiling to be broken. I am relentless in this way and look with gratitude to Zaha Hadid, who has scattered the whole stereotype or psychological pattern that female artists are not as strong in the market. I am secretly waiting for the world to get more female billionaires, so that the buying power becomes more equal.

I feel I choose the best qualities of the three places — Norway for the innocent and virgin territory that allows a deep respect for human rights, France for a mature culture and a knowledge bank with a strong philosophical and intellectual foundation, and the USA for the will to invent, be entrepreneurial, and to have fun while having success.

You had an exhibition in Oslo last November exhibiting your first generation smart sculptures, named the WANDS. Can you tell us a little about the exhibition and your inspiration behind the WANDS piece?

The WAND project started as an idea in the late 1980s; more specifically, with the idea of a future where surfaces and environments could be sensory-based and interactive. It sounds so obvious now when I write this, but 30 years ago this seemed very far fetched. Last year I did a large solo show in Centre Pompidou, ART AVATAR, where I let the public build an animated art sculpture that they could see in a ‘virtual mirror’ (VR live space) as they moved around the space. This exhibition, soon to be set up on a work tour in a second edition, works with a duality of real and virtual space, we used tracking systems and infrared to be able to monitor the visitors movement. With this new technology available, I decided it was the moment to make WANDS, first generation smart sculptures. With the invitation from ANX Atelier Nord to make the exhibition and funding from The Norwegian Art Council and a Kickstarter campaign, I was able to investigate building software and the outer shell. It has been a new learning curve for me, and I am already planning the second generation to achieve steps we could not manage this first round.

The WANDS react to proximity with lights and sounds and we used Morse code that signals the name of each sculpture — Trans Human, Bio Myth, Hybrid Love, et cetera.

Why does interactive and sensory art interest you in particular?

Our sensory world is very rich, and as knowledge producers, we can see that we still know very little about ourselves and the universe. Humans are still grappling with primitive structures like war, nations, gender discrimination, the lack of basic human rights, slavery and fights over resources. We have a very bad record of management of the wealth that the universe has granted us. Art is a way to enrich the experience of living on earth — it shows us the capabilities we have and that we have lots of potential to grow as cultures that can do more incredible things. The interactive aspects are important, so that the public get involved in the creative process. As an artist, I am always seeking to reveal a path where each person can be encouraged to seek the simple pleasure of creative solution. Solve problems with creative solution — that is my message. 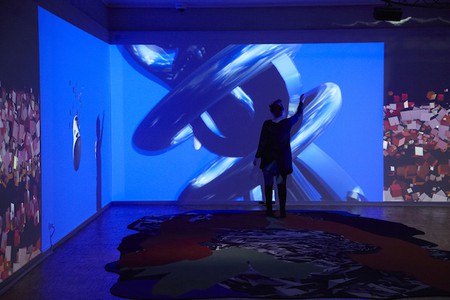 In my early paintings I started using patterns that looked both like urban planning graphs and the architecture in a microchip. I started to think about why the same shapes show up again and again in human history — I found the same graphics in early Inca civilization as well. Actually, I made up this theory that the chaos that we know in the universe is made of numerous fractals — some of them too large, others too small to see, and some probably invisible in the dimensions available for us to understand. I play with the idea that art is a part of such a creative fractal or genome that pushes humankind into the next levels of understanding. Building the machine is a way to understand creation. We mimic nature on each step of the way, and computers are a part of this wish. To build better computers, scientists study the brain. Now that the sciences have done major leaps in a few years, technology is expanding and accelerating in terms of what can be done in biology and cybernetics.

Do you think we are becoming too attached to technology today?

This is a question that a lot of people are asking but very few people are doing anything about. We might think of threats and dangers but yet we go on doing what we do because the technology tools are helping us with so many things. There is a question of finding the balance for each person. As an artist, I balance with no tech materials and the work only possible in computers. The knowledge the body and the hands store are still an important part of a good brain function.

Have you had any artistic disappointments in your career? If so, how did you overcome them?

Oh yes, so many it’s hard to count. I like the statement made by Le Corbusier: ‘There is nothing more thrilling for the creative mind than to realize a dream, but to do so, prepare yourself for a lifetime of humiliations.’ There is really not much to do when you have a setback except not to lose faith in oneself and find a way to stay on track.

What can we expect to see from you in the near future? Are you working on any particular projects at the moment?

I am already working on WANDS, second generation smart sculptures, and on all of my series, paintings, videos, sculptures, designs.

I have the second edition of the Pompidou exhibition ART AVATAR starting on a world tour in 2017. I have a upcoming personal shows in San Francisco and New York in 2016. A lot of things are happening for my career right now.

What is the best piece of creative advice you have ever received? Who was it from?

The sooner you learn to say ‘f*ck off,’ the better off you are! It was the Danish master architect Heine-Madsen who said that just before he died 30 years ago. It is really a very difficult lesson to learn — I still have to learn it. It is not as aggressive as it sounds. It’s about standing up for the right values and the right principles, and giving your opponent a chance to rectify their position. If you want to make something great, you cannot be bullied into changing concepts, ideas or the reason for the work to exist. 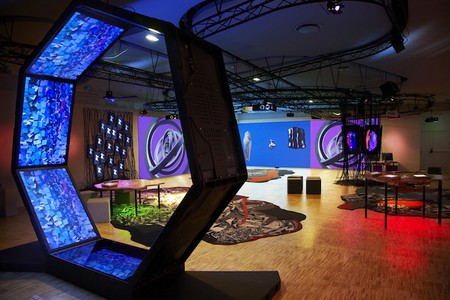 What is the best gallery or museum for art lovers in Oslo?

There are so many new museums and exhibition spaces now in Oslo, but I still love the Munch Museum.

If you had to have only one, which artwork would you hang in your living room?

I would keep my STARGATE sculpture.

Henry Miller wrote 11 work schedule commandments in his book, Henry Miller on Writing. Number 7 is ‘Keep human! See people, go places, drink if you feel like it.’ Do you have a particular morning routine or way of working which helps you to create?

Since I was 19, my discipline as an artist has been ‘Wake up when you want, and do what you want.’ It has worked very well for me. I am always rested, always doing what I love. 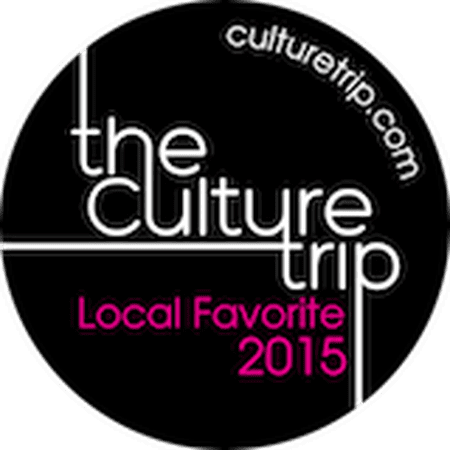 Pia MYrvoLD is one of the winners of Culture Trip’s Paris Local Favorite 2015 Award. The Local Favorite badge is awarded to our favorite local towns, restaurants, artists, galleries, and everything in between. We are passionate about showcasing popular local talents on a global scale, so we have cultivated a carefully selected, but growing community.