What You Need to Know About the World's Largest Sculpture Park 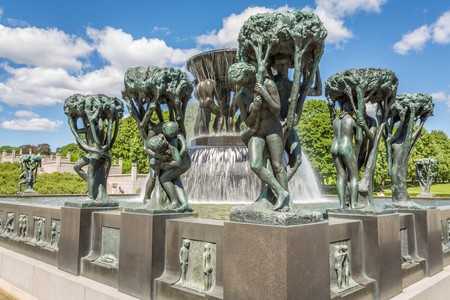 Attracting more than a million visitors every year, free-to-enter Vigeland Park in Oslo is one of the top tourist attractions in Norway. It is the largest sculpture park by a single artist in the world, with more than 200 sculptures in bronze, granite and cast iron by acclaimed Norwegian sculptor Gustav Vigeland, whose realistic work represents the cycle of human life and all its emotions. Intrigued? This is what you need to know before setting out.

Where is Vigeland Park?

Vigeland Park is within Frognerparken (Frogner Park), the largest public park in Oslo. A popular spot in all weathers, Frogner Park also has an open-air pool, a cafe and restaurant, plus the biggest playground in Norway and the biggest collection of roses in the country, with 14,000 plants of 150 species. It is also home to Frogner Manor and the Museum of Oslo, the latter of which tells the history of the city through paintings, models and photographs.

The open-air sculpture park is open 24/7, and is testament to Vigeland’s vision to create a truly public space for the people of Oslo. Vigeland was involved in the design and planning of the park, although unfortunately he died six years before completion in 1949. 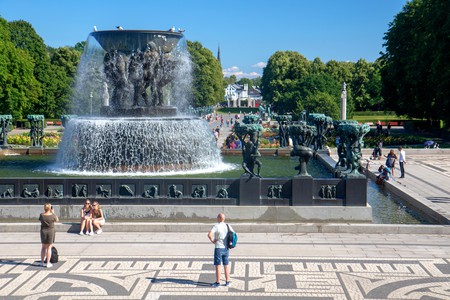 What sculptures will I see in Vigeland?

The sculptures in the park, a tribute to the complexity of humankind, are centred around The Monolith. Carved out of a gigantic stone block, it is the highest point in Vigeland Park and depicts 121 humans climbing around and clinging to each other, with children at the top. Every figure represents a different stage of life.

Another important piece is The Bridge, which has 58 bronze sculptures showing men, women and children of different ages. They were sculpted by Vigeland between 1925 and 1933 and were some of the first pieces mounted in the park in the early 1940s. Sinnataggen (The Angry Boy) is one of the most iconic and is often reproduced on postcards of Oslo. Just beyond The Bridge, through a rose garden, is The Fountain, surrounded by 20 statues from all stages of life from childhood to death. Other notable sculptures include Dancing Young Woman, Man Fighting Lizard and The Wheel of Life, a bronze circle of human figures. 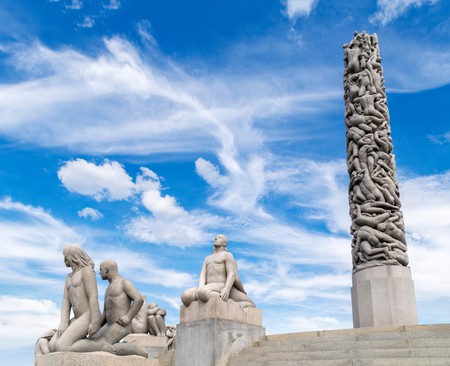 The sculptures in the park are centred around ‘The Monolith‘, carved out of one gigantic stone block | © Ian Dagnall / Alamy

Described as “the weirdest statues in the world” by the Daily Mail, Vigeland’s sculptures are a reflection on (and celebration of) life in all its strange and wonderful forms. The figures are studies of the wonder of the human body at every stage. They reveal the full range of human emotions, including those not usually celebrated, such as anger and violence. These include Man Throwing Woman Over His Head and Man Attacked by Babies, showing a father struggling with the responsibilities of parenthood.

Through Vigeland’s work, we can confront our own feelings about ourselves and those around us, and perhaps consider our place in the cycle of life. Equally, by giving everyone access to his sculptures in a free city park, Vigeland makes it clear that these emotions – like his work – are universal. 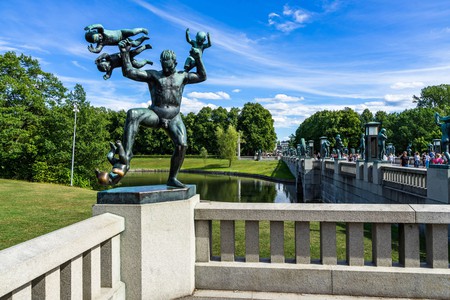 Gustav Vigeland is the most celebrated sculptor in Norway. Born in 1869, he moved to Oslo as a teenager and made a significant impact on the city, most notably by creating Vigeland Park. He made his debut at the Autumn Exhibition in 1889 and went on to make a remarkable number of critically acclaimed sculptures and monuments.

He conceived the idea of creating an outdoor park for his sculptures in 1914, and full plans were agreed by 1931. Vigeland also convinced the City of Oslo to build him a home and studio, where he lived and worked for the rest of his life. In return, he promised to donate all his works to the city in the future, and indeed after his death, his home was turned into the Vigeland Museum.

Vigeland’s work can also be spotted elsewhere in Oslo, and there are three of his monuments near the Royal Palace: The Abel Monument, Camilla Collett and Rikard Nordraak. His sculptures can be seen across Norway in Bergen, Vigeland’s hometown of Mandal, Kristiansand and Trondheim, where he made 44 sculptures for the Nidaros Cathedral. In addition, the Thiel Gallery in Stockholm owns the largest collection of Vigeland sculptures outside Norway. 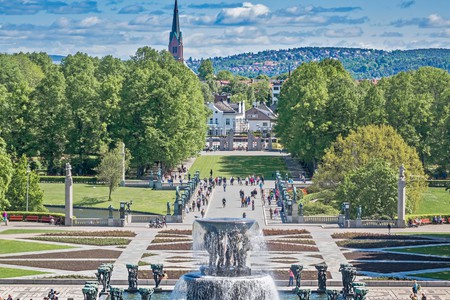 This is an updated version of an article by Benjamin Parkin.