There's a Godzilla-Like Art Installation in Central Oslo, Here's Why 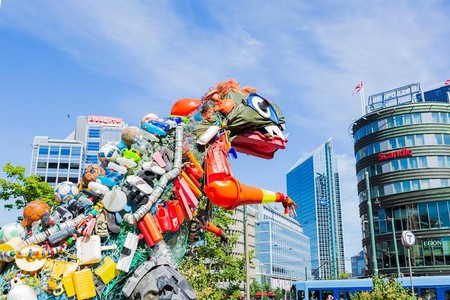 It only takes a short walk to Vigeland Park to be reminded that when it comes to sculptures, Oslo does not shy away from weird. Especially if said sculpture or installation also has a higher purpose. The city’s latest fantastic beast, Plastozilla, falls into that category. Made entirely out of recycled plastic litter, the four-metre-tall sculpture has been turning heads outside Oslo Central Station while educating people on the realities of plastic pollution. Hurry up and visit it before it’s gone.

This seemingly random combination of tools may sound like something MacGyver would use to solve a case, but it’s actually part of a bigger picture. These items, combined with many others (like inflatable boats, shopping trolleys, traffic cones, brooms, shoes, drinking bottles and one vacuum cleaner head) where the building blocks for Plastozilla.

Plastozilla is a sculpture by Pippip Ferner, commissioned and produced by the Agency for Cultural Affairs in the City of Oslo, Kulturetaten, as part of the ‘Bilfritt byliv’ project. The project’s main goal is to turn the city as car-free as possible, but it also has a broader environmental approach. The idea is to create more pleasant, greener spaces for Osloites to live and work in; to reclaim public spaces, including streets, as places where people interact and socialize; and to create new arenas for arts and culture to blossom. 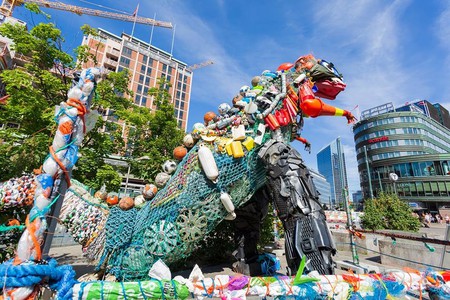 Plastozilla is made completely out of plastic litter | © VisitOslo / Didrick Stenersen

So they reached out to Ferner, an Oslo-based artist who’s active in the Guerrilla Plastic Movement. Ferner had been picking plastic for some years with no specific project in mind; she knew what items can be useful and worth saving. “When I got the commission from Kulturetaten I had two ideas – a dinosaur-like creature was one of them,” the artist told Culture Trip. It was aimed to reference how “we now exterminate species at the same speed as back when the dinosaurs lived.”

After agreeing with Kulturetaten on the dinosaur, Ferner looked at her huge pile of plastic and wondered what could be used where. “Soon after that, I started working on the head. The rest kind of came as I started to test out things. And when I found new plastic, I kind of got ideas for what it could be used for. I had some help from Guerrilla Plastic Movement, Christine Istad especially,” Ferner says.

Awareness of the real monster

Plastozilla’s name is a nod to Godzilla, the legendary dinosaur-like monster that emerges from the waters to wreak havoc. According to Kulturetaten, the sculpture may look fun, but it has a serious message: to help raise awareness of plastic pollution among the citizens of Oslo. “It is an important and engaging way of showing the plastic problem,” adds Ferner, who is currently working on some other installations with some 2,000 plastic bags she has found.

Earlier this year, Oslo was named Europe Green Capital 2019. A Green Capital is a city with a consistent record of high environmental standards, that’s committed to further environmental improvement and sustainable development. A city that can act as a role model “to inspire and promote best practice to other European cities.” Plastozilla is just a reminder that Oslo can indeed be, and in many ways already is, that city. 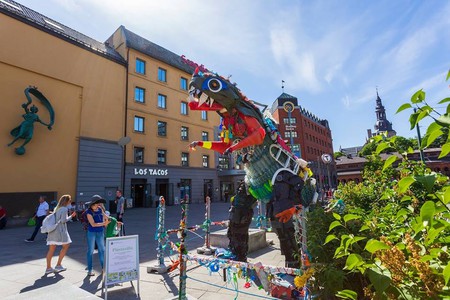