The Top 10 Things To Do and See in Spectacular Bergen 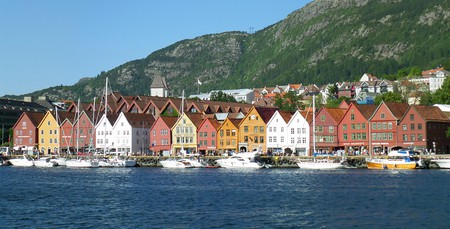 Once the largest city in the Nordic countries, and the capital of Norway throughout some of the country’s most influential periods, Bergen is today the second-largest city in the country. A past seat of the Hanseatic League, Bergen still plays an important economic and cultural role as the picturesque city in between the seven mountains and breathtaking fjords. See our list of some of the many things to see and do in this spectacular landscape. 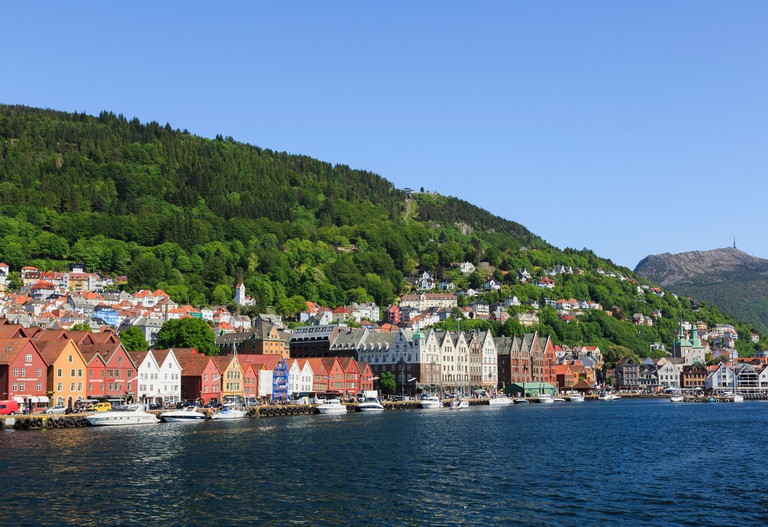 These Medieval Hanseatic buildings on Bryggen wharf are a popular destination | © pbucknall / Alamy Stock Photo
By far the most iconic sight to greet any visitor to Bergen is the colourful facade of Bryggen, the old Hanseatic wharf first established in the 14th century. It has been, and still is, a place of both cultural and economic significance. The picturesque wooden structures, rebuilt following a fire in 1702, later became recognised as a vital part of Bergen’s cultural heritage, and also the world’s, as a UNESCO World Heritage site. The wharf today houses a small museum, shops, restaurants and cafés and is an emblematic and natural focal point for locals and visitors alike.
Open In Google Maps
Bryggen, Bergenhus Bergen, Vestland, 5003, Norway
+4755552080
Visit Website
Give us feedback 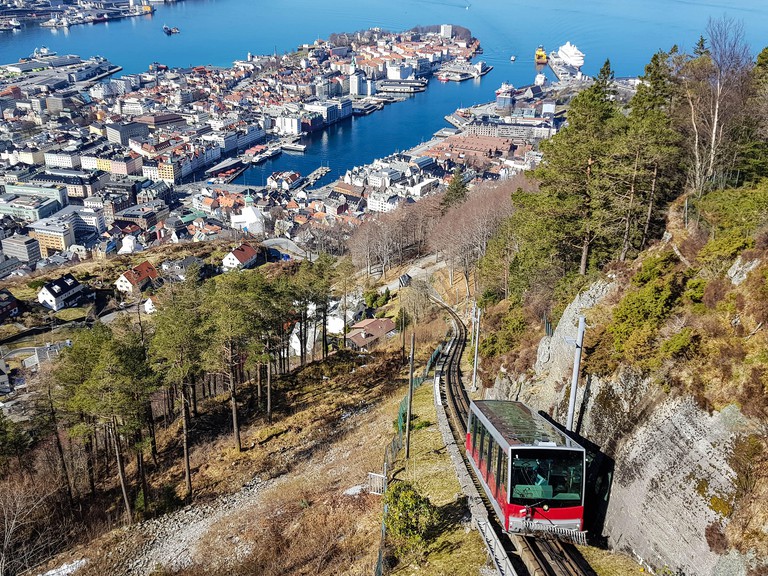 Climb Mount Fløyen for the best views of Bergen | © Steidi / Alamy Stock Photo
With Bergen known in Norway as the city of the seven mountains, it is only natural that you would want to visit one of them. By far the most easily accessible is Fløyen, which is close to the city centre. It’s connected to the town by a funicular, Fløibanen, that will take you to the top in less than eight minutes. Once at the top, you are free to enjoy spectacular views of Bergen and the surrounding landscape. Take Fløibanen back down, enjoy a leisurely walk down the mountainside, or go on a hike further into the mountains.
Open In Google Maps
21 Vetrlidsallmenningen, Bergenhus Bergen, Hordaland, 5014, Norway
+4755336800
Visit Website
Give us feedback 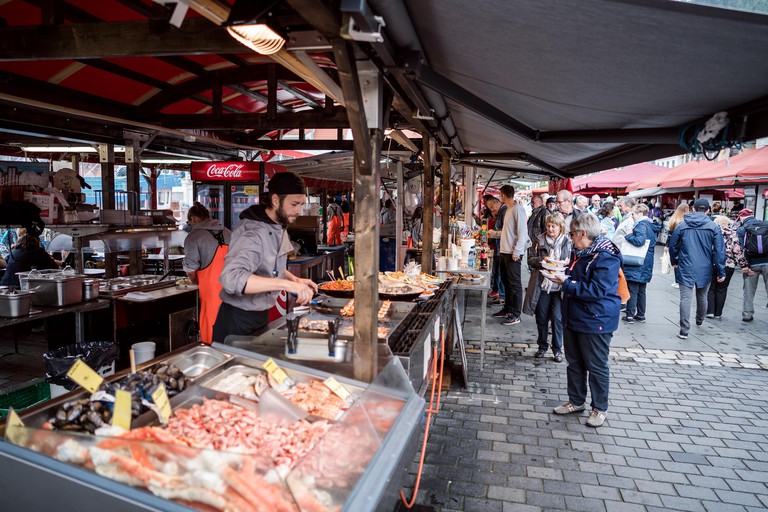 Shoppers sample the delights available at the Bergen Fish Market | © Andrey Armyagov / Alamy Stock Photo
Because of the country’s extensive coastline, traditional sea industries have been extremely important to Norway’s economy and cultural life throughout the centuries. With the busiest seaport in the country, it is only natural that Bergen is the go-to place for fish and other seafood. Take a trip to the outdoor Fish Market in the middle of the city centre to experience the lively atmosphere and the colourful selection of treasures of the sea. One of Norway’s most-visited outdoor attractions, the Fish Market offers an abundance of fish, shellfish, fruit, vegetables and hand-made crafts for you to buy, see and taste.
Open In Google Maps
5 Torget, Bergenhus Bergen, Vestland, 5014, Norway
Visit Website
Give us feedback 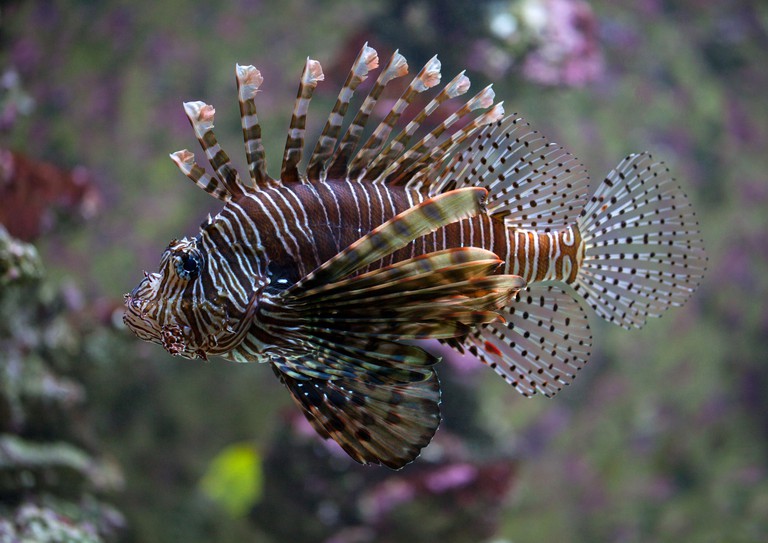 A lionfish studies the interesting humans behind the glass at Bergen Aquarium | © Ola Moen / Alamy Stock Photo
If the wonders of the North Sea have caught your fancy, a visit to the Bergen Aquarium is a must. Sporting over 50 different tanks and aquariums, with beautiful displays and an abundance of species, the aquarium’s collections range from fish and seaweed to penguins, sea lions, crocodiles and even the odd monkey. Be fascinated by live demonstrations, daily shows, screenings and events in a place that has formed an important part of the local cultural identity for over 50 years.
Open In Google Maps
4 Nordnesbakken, Bergenhus Bergen, Vestland, 5005, Norway
+4755557171
Visit Website
Give us feedback

Built in 1885, the Troldhaugen was the home of Norway’s most famous composer, Edvard Grieg, and his wife. Grieg had an international career as one of the leading figures of the Romantic movement and also played an important role in establishing the national identity in a newly established nation. Troldhaugen today serves as a museum, aiming to document Grieg’s life through exhibitions in the villa itself, as well as in his Composer’s Hut where he created some of his greatest works. Have a look at the villa, see Grieg’s personal Steinway piano, visit his gravesite, or listen to his music in one of the many concerts put on in the concert hall located on the property.
Open In Google Maps
65 Troldhaugvegen, Fana Paradis, Vestland, 5232, Norway
+4755922992
Visit Website
Give us feedback

KODE is one of the largest museums for art, design and music in the Nordic region, mainly due to its collection of artists’ homes, and external buildings in addition to its central buildings in the middle of the Bergen city centre. These buildings house temporary displays of the works of contemporary artists, as well as extensive permanent collections containing works by Edvard Munch, JC Dahl, Nikolai Astrup and others. Visit KODE’s main buildings and experience a truly diverse display of art and culture.
Open In Google Maps
9 Rasmus Meyers allé, Sentrum Bergen, Vestland, 5015, Norway
+4753009704
Visit Website
Give us feedback 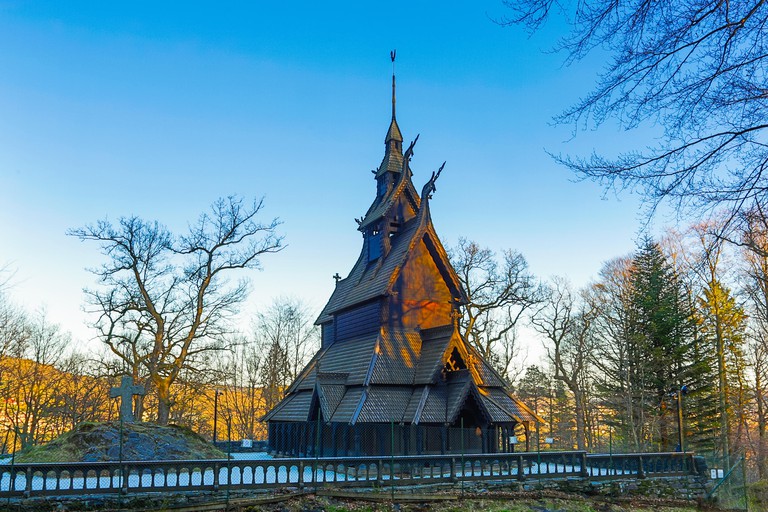 Fantoft Stave Church expresses a uniquely Norwegian architectural style | © Marius Dobilas / Alamy Stock Photo
One of the unique expressions of the Norwegian national heritage can be seen in the careful ornamentation of the stave churches, ranging from simple, spartan constructions to the dizzyingly complex. Fantoft Stave Church was built in 1150 but was completely destroyed in a fire in 1992 – the suspected work of notorious musician and convicted arsonist and murderer Varg Vikernes. The church, as it exists today, is, therefore, a reconstruction but is still very much a spectacular example of early Norwegian art, design and heritage.
Open In Google Maps
38 Fantoftvegen, Fana Bergen, Vestland, 5072, Norway
+4755280710
Give us feedback 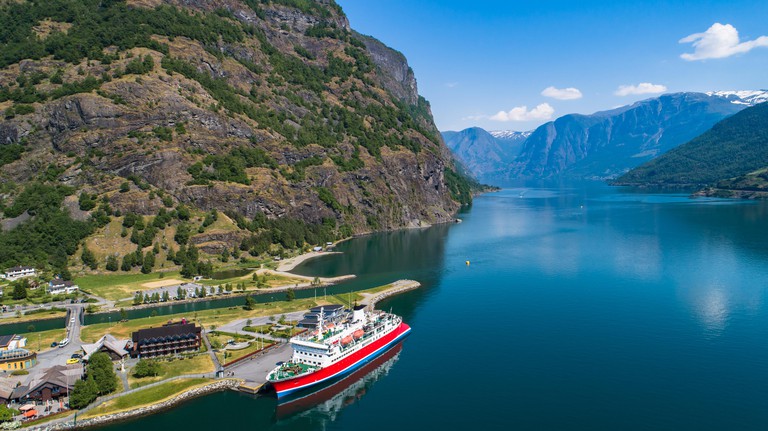 As Bergen is very much connected to the fjords surrounding it, there are several cruise companies stationed in the city, eager to show you the wonders of the famous Norwegian landscape or to offer you simple transportation to nearby towns and cities. One of the most spectacular offers for people interested in a more extensive voyage is Hurtigruten. This cruise sets off from Bergen daily and travels all the way along the Norwegian coast to its northernmost point. There are also simpler day trips, like those connecting Bergen to the nearby Sognefjorden, the longest of fjord in Norway; to Baroniet Rosendal, the smallest castle in the country; or to the surrounding fjords and mountains for a sightseeing trip. 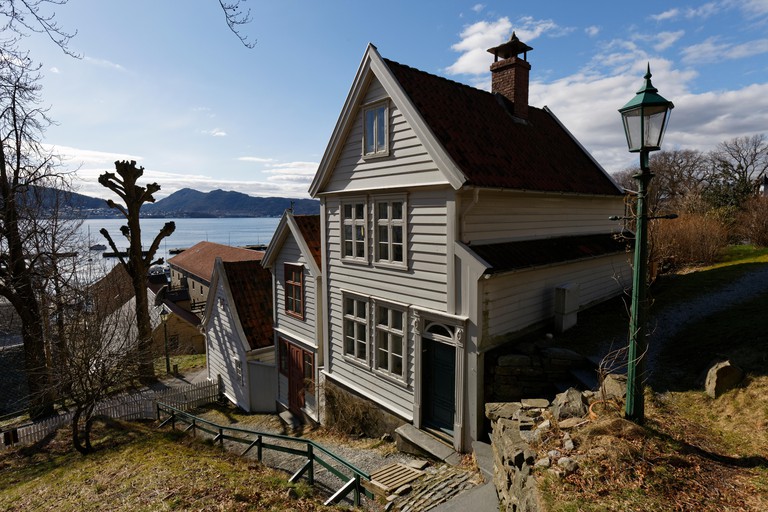 Old Bergen is an open-air museum with some 40 wooden houses in typical Norwegian styles from the 18th and 19th centuries | © Arthur Gebuys / Bergen, Norway / Alamy Stock Photo
In the 19th century, Bergen was one of the largest cities in Europe to consist of wooden buildings; it has therefore been susceptible to major fires. To preserve the memories of a city that changed rapidly, the Bergen City Museum was established. Walk along constructed streets, with authentic buildings on either side, and experience the distinct atmosphere of the old city streets. Through shops, workshops, details, ornaments and objects, history is brought back to life in its original setting.
Open In Google Maps
4 Nyhavnsveien, Bergenhus Bergen, Vestland, 5042, Norway
+4755308034
Visit Website
Give us feedback 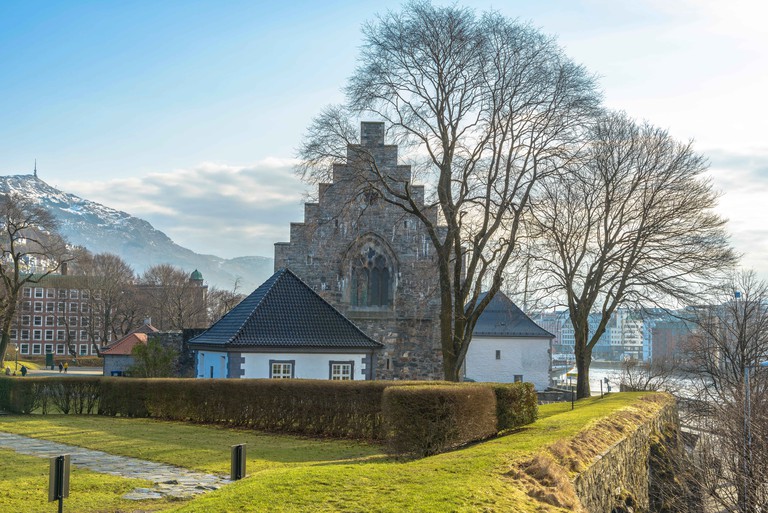 Haakon’s Hall is a Medieval stone hall located inside the Bergenhus Fortress | © Fadi Al-barghouthy / Alamy Stock Photo
Built around 1240, Bergenhus Fortress is one of the best-preserved Medieval buildings in all of Norway. Functioning as the royal palace when Bergen was still the capital of Norway, until about 1300, the Fortress contains some of the best-preserved secular buildings in the country, including Haakon’s Hall and the Rosenkrantz Tower. Today, these are open to the public and used as venues for concerts and official banquets. Visit Bergenhus Fortress to see some of the sites that witnessed the foundations of the Norwegian state and its rulers, and follow them from the Viking Age until today.
Open In Google Maps
Bergenhus Bergen, Bergen, Vestland, 5003, Norway
+4755546387
Visit Website
Give us feedback
Give us feedback