The Top 10 Things To Do And See In Aker Brygge

As a scenic area of Oslo, Aker Brygge is a sight for sore eyes and a lively hub for culture, shopping, dining, and tourism. Especially popular during the summer half of the year, the boardwalk and pier along the water is home to a number of restaurants, all serving top-notch meals in beautiful Norwegian surroundings. Enjoy the scenery, learn something new, see wonderful pieces of art and eat world-class seafood, all by Norway‘s Aker Brygge.

The Astrup Fearnley Museum of Modern Art displays the private Astrup Fearnley collection of contemporary art and is the number one destination for modern art in Norway. Since 2012, the museum has been housed by world-class architecture in their new building designed by Renzo Piano, situated on the tip of Tjuvholmen, Oslo’s most recent borough. The museum has a wide collection spanning from the 1960s until today with works from artists such as Francis Bacon, Andy Warhol, Jeff Koons, Damien Hirst and Bjarne Melgaard. The museum is surrounded by a sculpture park, also by Renzo Piano, and the Tjuvholmen city beach area.

Tjuvholmen, out past the boardwalk of Aker Brygge, opened in 2012 and contains the city’s newest beach that is accessible to the public. Out on the tip of the headland lies a tiny beach and a huge lawn, which is perfect for spending a day in the sun. The lawn, really a sculpture park designed by Renzo Piano for the Astrup Fearnley Museum of Modern Art, serves as a beautiful green lung among designer buildings and wooden walkways. 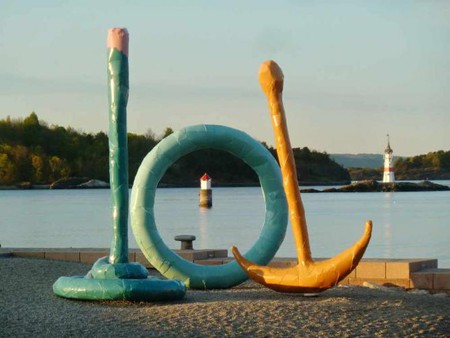 One of the more pronounced buildings you will encounter, on your way out to the Aker Brygge boardwalk and pier, is the Nobel Peace Center. The Nobel Peace Center is, as the name suggests, a center documenting and presenting the Nobel Peace Prize laureates and their work, as well as the life and work of Alfred Nobel himself and the prizes he created. The museum uses sophisticated interactive technology in their exhibitions, making for a spectacular experience for anyone keen to learn more about the social and political issues and causes fronted by Peace Prize winners.

The Oslo City Hall is perhaps the most dominating building in the Aker Brygge area. Looming over the harbor and the plaza in front, the 1950s building houses the city council’s main administration, but hosts large events such as the Nobel Peace Prize ceremony. The building has been decorated by several great Norwegian artists and many parts of it are open to the public during the day, including the Carillion, where a concert is played every Wednesday. The City Hall offers free guided tours in several languages during the summer. 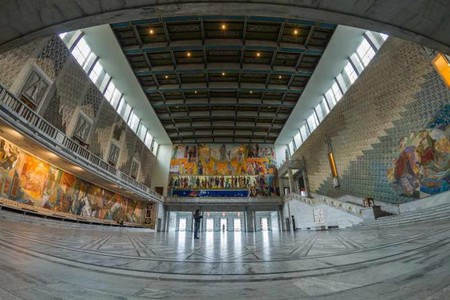 When in the middle of a city it is sometimes easy to forget that you are also by the seaside. Aker Brygge harbor, a scenic place with restaurants and ample opportunity for shopping, is also a working harbor with commuter boats going in and out all day. Many of these routes are valuable to visitors, as well as locals, as they can take you to remotely beautiful places in the fjord. Enjoy a scenic trip over the water to places like Hovedøya Island, with medieval ruins, or to Bygdøy, another borough of Oslo with multiple museums such as the Viking Ship Museum.

Rising on the hilltop across the bay from Aker Brygge is one of Oslo’s most impressive and historic buildings, Akershus Fortress. The medieval castle built towards the end of the 13th century was used as Oslo’s primary defense for centuries. It’s still a military area but is primarily used for stately dinners, visits for foreign heads of states, and museum buildings. The fortress houses the Norwegian Resistance Museum, and the Royal Mausoleum, where both modern and medieval Norwegian royalty is laid to rest.

A vital part of the vibrant atmosphere of Aker Brygge is the relative proximity to many of the capital’s theaters and concert venues. One such theater is Latter (‘laughter’), one of Oslo’s largest comedy venues hosting stand-up and performances from comedians. Though many of the performances are conducted in Norwegian, Latter is a frequent host to international comedians from both the US, Ireland and Britain. Enjoy dinner out on the pier, and then a drink and a laugh at Latter.

While in a harbor area, why not enjoy one of Norway’s most important exports, fish. From fishing boats along the dock, fresh fish and seafood are sold almost every day. You can buy fresh salmon fillets and make sashimi, cook succulent cod, or enjoy the ultimate Norwegian summer experience and buy shrimps. Though they are really in season during the winter months, shrimps are traditionally bought and eaten during summer, preferably out in the sunshine. Buy a bag of freshly cooked shrimps, some bread, mayonnaise, and salad, put on some lemon juice and enjoy the best summer dish in the world.

Aker Brygge, as a central area in Oslo, is a natural hub for gallery activity. With the addition of the new borough, Tjuvholmen, and the move of the Astrup Fearnley Museum of Modern Art out onto its wooden boardwalks, the artistic endeavors in the area has doubled. Take a look around and enjoy anything from tiny private collections to works on sale in the larger auction houses. The numerous galleries provide people with many opportunities to enjoy art while in scenically beautiful surroundings right next to the fjord. 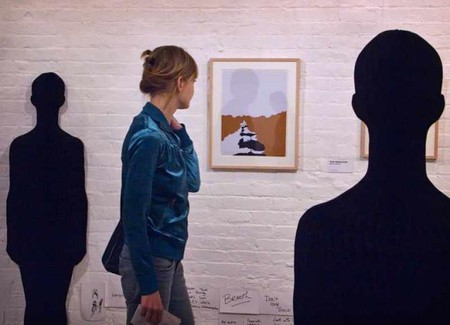 While the area surrounding Aker Brygge offers many distractions and attractions, don’t forget that Aker Brygge in itself is a sight to behold. The area is a lively hub of activity all day long and serves as a beautiful, yet functional, part of the city with a dock for fishing boats and commuter routes over the fjord. Take a walk along the boardwalk in the afternoon sun, see the fortress across the bay, walk through the sculpture park out on Tjuvholmen, dip your feet in the water at the city beach and enjoy a glass of wine with a delicious meal in one of the area’s numerous restaurants.