The Most Mouthwatering Restaurants in Norway

Maaemo creation © Jan Mark Holzer / Flickr
The new Nordic cuisine which has swept through the Nordic countries has helped to reinvigorate Norway and put it on the culinary map. As of 2017, Norway now has four restaurants with Michelin stars – three of them in Oslo. But it is worth looking outside of Oslo too, to get a broader sense of just how many excellent restaurants exist up and down the country.

With its three Michelin stars, Maaemo is the undisputed king of Norwegian fine dining, and it was one of the first two Nordic restaurants to be awarded three Michelin stars in 2016. The Oslo-based restaurant uses many flavours and ingredients unique to Norway and adds an exciting and decidedly Norwegian twist to the new Nordic kitchen – which focuses on local, seasonal, high-quality ingredients and experimental combinations.

Gastropub, Northern European, $$$
Ægir by the beautiful Flåmsbana railway serves you an experience not quite like any other. Their pride of joy is beer, which they manage to match successfully and tastefully with most of their dishes. What’s more, their building evokes a Viking hall, and their proud ancient heritage is reflected in their Viking menu, which they claim will give you a “taste experience from 1017 to 2017”. Their ingredients are local and would have been around a millennium ago, though they are brought together to suit modern palates. 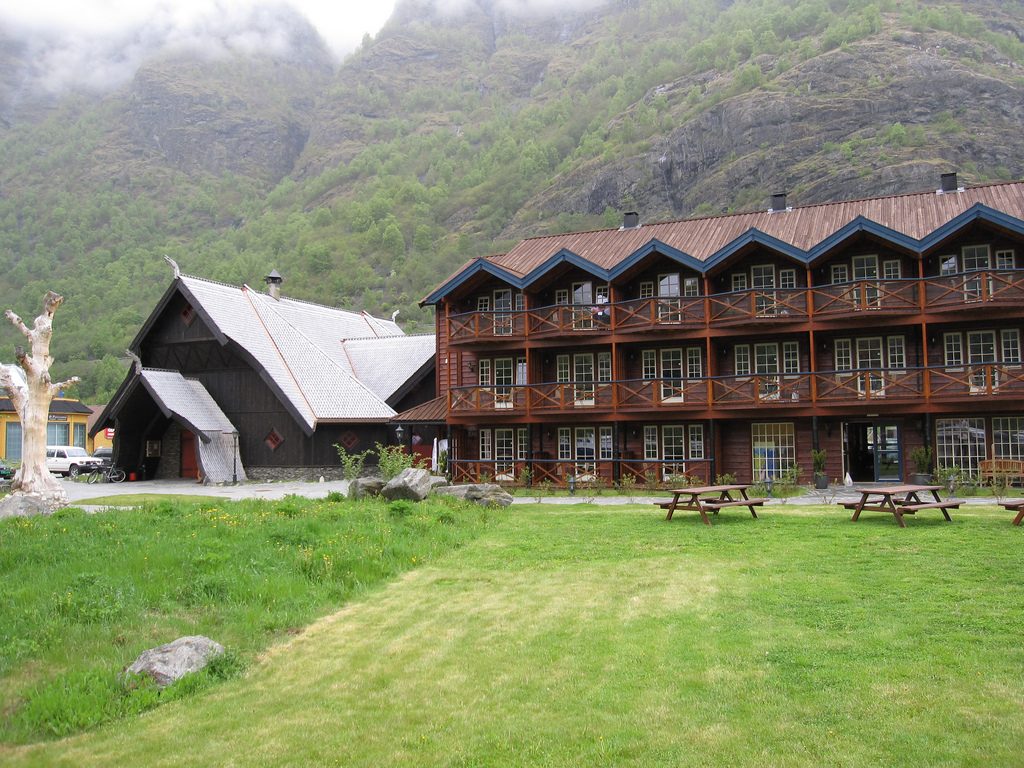 Restaurant, Seafood, European, Soup, $$$
Aker Brygge with Enhjørningen and its red unicorn to the right | © Guillaume Baviere / Flickr
Enhjørningen (“the Unicorn”) restaurant lies on what may be Norway’s most beautiful wharf, Bryggen in Bergen. Enhjørningen dates back at least to the 13th century, although the house had to be rebuilt after a fire in 1702, when Bergen was a large Hanseatic trading point. The restaurant’s cuisine reflects Bergen’s most important traditional trade, the fishing industry. It serves outstanding fish and seafood dishes, even if there are no unicorns in the menu.
More Info
Open In Google Maps
29 Enhjørningsgården, Bergenhus Bergen, Hordaland, 5003, Norway
+4755306950
View menu
Visit website
Visit Facebook page
Send an Email
Give us feedback

Bakery, Restaurant, Northern European, $$$
Aunegården in Tromsø, northern Norway, has existed for more than 200 years, and the current owners have been very careful to preserve as much of the building’s historical character and as many details as possible, which has resulted in the building retaining its fantastic old atmosphere. Two excellent chefs with international experience have been brought in and together, they take inspiration from across the world to get the very best out of whichever local ingredients are in season; the restaurant is so committed to sustainable food sourcing that the menu changes every week to reflect exactly what’s in season.
Looks like it's closed Hours or services may be impacted due to Covid-19
More Info
Open In Google Maps
29 Sjøgata, Tromsø, 9008, Norway
+4748502353
View menu
Visit website
Visit Facebook page
Send an Email
Give us feedback

The award-winning Mother India restaurant in Kristiansand features some of the best Indian food you’ll find anywhere in Norway. Its 22 years in the industry is testament to its success. It produces excellent authentic Indian dishes, led by its star chef Sarita, served in a cosy and warm Indian-Norwegian fusion atmosphere. Dishes range from mild to very spicy, to suit any palate that may pass by in Norway.

Restaurant, Northern European, $$$
The breathtaking view at Hoven | © Hoven Restaurant
Hoven Restaurant combines fine dining at reasonable prices with a great atmosphere and even greater views. The highly modern-looking restaurant suits its dramatic location splendidly – it’s literally on a cliff’s edge overlooking the Nordfjord, making it difficult to tear oneself away from the visual to the gustatory. The effort is well worth it, however, as the flavoursome local ingredients perfectly complement the diners’ surroundings. The dishes are top-quality without becoming snooty.
More Info
Open In Google Maps
1002 Fjordvegen, Loen, Vestland, 6789, Norway
+4757875900
View menu
Visit website
Visit Facebook page
Send an Email
Give us feedback

Røros is an idyllic little town of wooden houses in inner central Norway. The town’s history as a centre for mining and the restaurant’s past as the Director’s house can both be witnessed in the restaurant, which continues Røros’s wooden and pioneer-like feel in a playful and welcoming way. The restaurant, which is part of Bergstadens Hotel, blends local and international inspiration. It has an excellent and extensive pizza menu as well as fabulous local dishes.

Restaurant, Northern European
Gapahuken in winter | © Geir Moen and Lene Stavå
Gapahuken Restaurant, close to Kirkenes, has some hard-core location bragging rights: It offers panoramic views towards Russia, which is less than a kilometre away. With its glass and wood framing, the beautiful modern restaurant fits well into the landscape. It serves the best from the local area depending on what’s in season, including such delicacies as cloudberries, local arctic salmon and reindeer.
More Info
Open In Google Maps
Storskog, Kirkenes, Troms og Finnmark, 9900, Norway
+4778990820
View menu
Visit website
Visit Facebook page
Send an Email
Give us feedback
Give us feedback