The Most Beautiful Buildings in Bergen 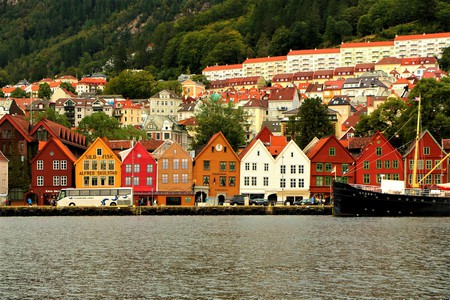 Bergen is a beautiful little city full of colourful wooden and stone buildings from across the centuries. While the buildings at Bryggen are world-famous, there are also plenty of other buildings equally worth exploring. Take a look at just a few of them here.

It would be sacrilege not to include Bryggen in a list of Bergen‘s most beautiful buildings. The Bryggen waterfront dates back as far as 1070 and became the centre of the Hanseatic League’s trading in the city from the 14th century. Though some of the buildings have been subject to fires and decay through the ages, many of them are centuries old. While the fronts are beautiful, the houses should really be explored throughout – plenty of shops and treasures are waiting at the back of the houses. 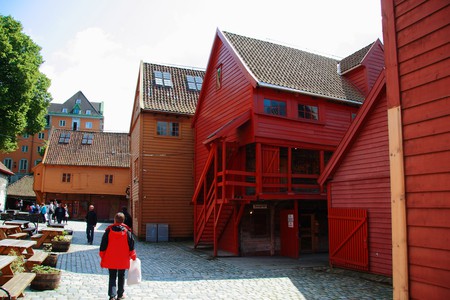 The train station at Bergen dates back to 1913 when it opened to accommodate the Oslo-Bergen railway completed four years earlier. The well-known Norwegian architect Jens Zetlitz Monrad Kielland designed it according to the popular Northern European trends of the time, mixing a more heavyset Medieval-inspired style with the modernist jugendstil (Art Nouveau). This comes to play in the main hall, where the heavy stone walls are offset by the elegant roof and glass windows which show off the station’s most precious asset, its view to the mountains. 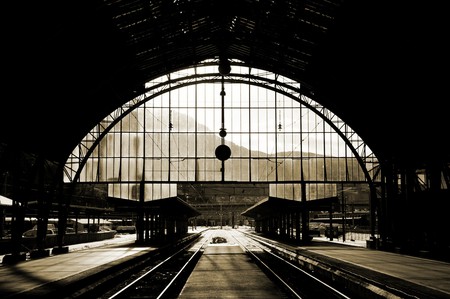 Bergen Station with view to the mountains | © Kamil Porembiński / Flickr

The Hanseatic Museum is just up the road (or wharf) from the Bryggen buildings. The museum, which is one of Bergen’s best, is beautiful both inside and out. It tells the story of Bergen’s long and crucial relationship to the Hanseatic League and includes historical rooms, Schøtstuene, which match the building’s outer walls in style and splendour. This story is pretty much the story of Bergen over more than 400 years. 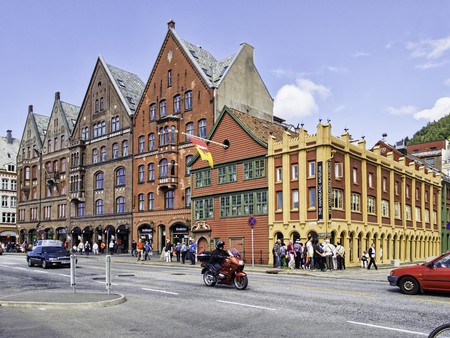 In 2012, the various art museums in Bergen were combined under the name KODE. Most of them are located close to each other in the city centre. The most beautiful part of the museum is arguably what was formerly called the West Norway Museum of Decorative Art. The building, known as Permanenten (“The Permanent”) to locals, was designed by Henry Bucher in a neo-renaissance style and completed in the 1890s. Luckily (particularly considering its local name), the building survived a large fire in Bergen in 1916. It reopened in late May 2017 after two years of renovation and has been brought back fully to its former glory. 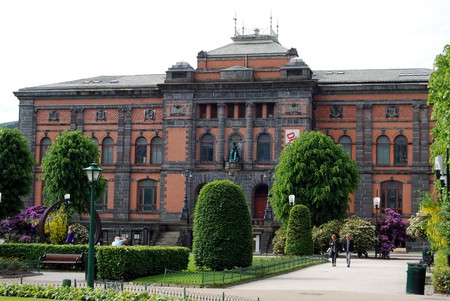 The St Jakob Church is not really a tourist destination, but its central location makes it easily reachable for a quick photo or two and a walk around the elegant building. The neo-romantic-style church was completed in 1921 and is a good example of many classic Norwegian churches. It caters to youth and hosts cultural events today. 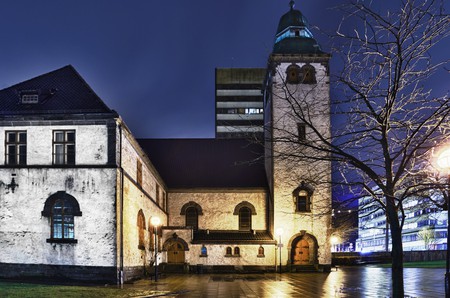 Let’s face it, there are few ugly castles out there and Bergen’s one is no exception. The Bergenhus festning area also includes the ruins of an even older bastion, Sverreborg, which dates back to the 1200s; the Nazis even housed two cannon at Sverreborg during the Second World War. Bergenhus was actually the seat of the Norwegian royals for many years and Bergen was the capital of Norway in the Middle Ages, during a highly successful period of the country’s history. It was the largest city in the Nordic countries for centuries and remained the largest city in Norway until the 1930s. 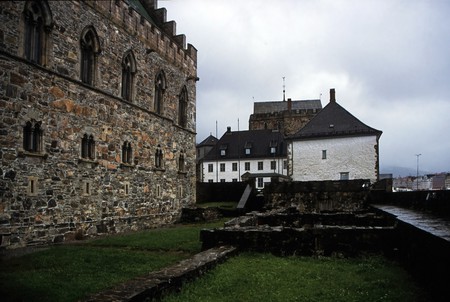 Troldhaugen was the summer house of the famous Norwegian composer Edvard Grieg and his wife for the last two decades of his life. The house and museum is well worth a visit for fans of classical music, but the garden and concert hall are worth a visit in themselves. The modern concert hall is partially disguised under the grass lawn, but the large glass wall at one end of the building looks out at Grieg’s idyllic little composer hut and the fjord. It is a little out of the way from the city centre, but special tourist busses will depart from the tourist information centre in Bergen at 11am throughout this summer, taking you there and back by 2pm. These bus visits will include a 30-minute concert as well as the museum for 250 kroner, a very fair deal. It is also, of course, possible to make your way there by car or public transport. 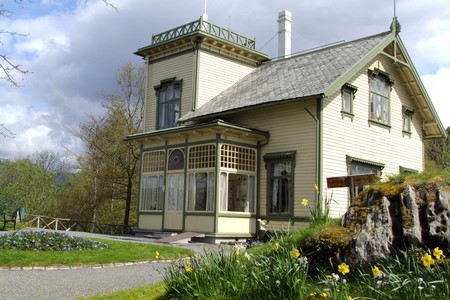 Though Gamlehaugen is not officially a castle, it is known as such to many locals, and the royal family have confused this status even more by using this elegant building as their West Norway residence. Gamlehaugen was modelled on a Scottish – you guessed it – castle but only built in 1900, though similarly grand manor houses stood in its place at Gamlehaugen for centuries before then. The fjord view and park, which was also remodelled in 1900, make for beautiful surroundings even on a rainy Bergen day. Tours of the interior are available during the summer. Gamlehaugen is roughly an hour’s walk from the city centre or easily reachable by car. 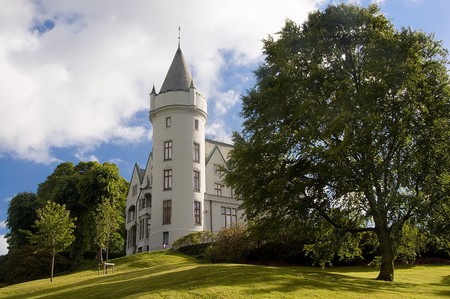 St Mary’s Church is the oldest remaining building in Bergen, dating back to at least 1180. It has survived two major fires and witnessed Bergen’s history unfold for more than 800 years; a fact which is reflected in its interior, which houses one of Norway’s most beautiful medieval altar pieces and a luscious pulpit partially made from turtle shell. The latter was paid for by Hanseatic tradesmen who lived in Bergen – St Mary’s was used as the church for the German traders at Bryggen from 1406 until 1766 and known as “the Germans’ church” during this time. In fact, the last sermon in German was only held in the church in 1906. Mariakirken, which is located just behind Bryggen, is one of Bergen’s biggest attractions. It was renovated in 2013. 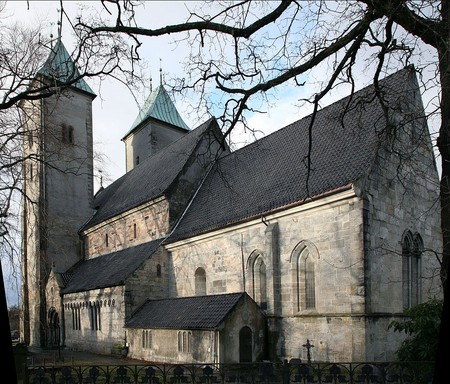 Until 1992, Fantoft Stave Church outcompeted St Mary’s as the oldest building in Bergen, dating back to 1150. Tragically, however, the stave church burnt down in a fire caused by arson. The beautifully reconstructed church now in its place is no less beautiful, however, and a great example of one of the most distinctly Norwegian styles of building you’ll find anywhere. Most of the stave churches popped up in Norway between 1100 and 1350 and combined the new Christian symbols and traditions with very Viking-like architectural characteristics. It is believed that up to 2,000 stave churches once existed; now 28 remain, mostly in the West Norway region, of which Bergen is the capital. All of the stave churches are worth a visit: They are beautiful and unique, and many of them are in some truly astounding locations. With its position just six kilometres from the city centre, the Fantoft church is certainly the most convenient to get to for visitors to Bergen. 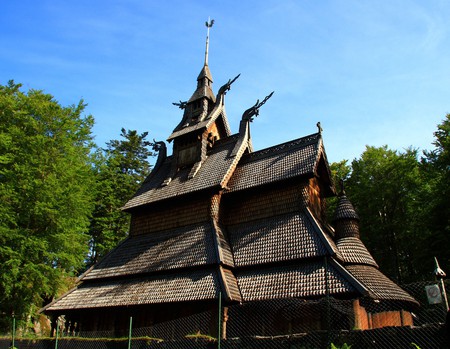