The Best Restaurants in Bakklandet, Trondheim 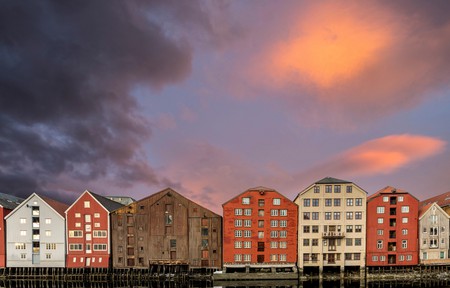 Bakklandet is a charming old neighbourhood in Trondheim filled with rows of colourful wooden houses. Situated between Gamle Bybro (Old Town Bridge) and Bakke Bridge (Bakke Bru) on the east side of the Nidelva River, the area is home to some of Norway’s best restaurants. 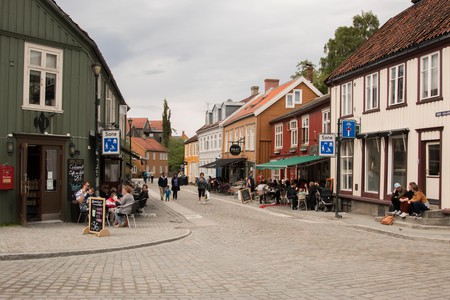 From traditional bistros to sustainable vegan restaurants, Bakklandet has something to suit all tastes and budgets | © vegarf / Alamy Stock Photo

With its cobbled streets and wooden wharfs, Bakklandet is one of the most idyllic and charming neighbourhoods in Trondheim. The most popular way to get here is via the famous Old Town Bridge, or Gamle Bybro. The district is made up of 17th- and 18th-century wooden buildings that are a mix of private residences, shops, cafés and restaurants. Especially popular with students and travellers, it is the perfect place to meet for a catch-up, a drink or dinner. And for such a small area, there are plenty of restaurants to choose from. 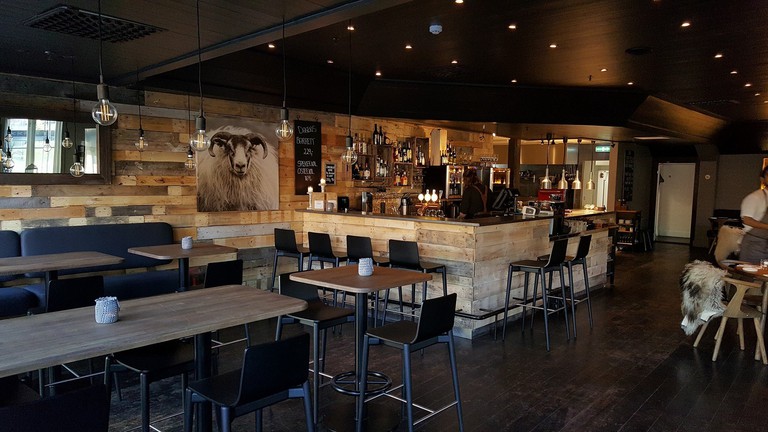 If you’re after fine dining, look no further than Folk og Fe – a bistro situated in the heart of Bakklandet. At this eatery, you will find traditional dishes made using local produce. The menu changes depending on the season, so you know you’re being served the best possible produce at any given time. Folk og Fe follows a sustainable ‘no-waste’ concept, by serving meat dishes that use the whole animal. Simple, tasty, unpretentious and rustic food is what this restaurant does best. Folk og Fe is popular for its sharing dishes, with game, poultry and fish served on boards in the middle of the table. In 2015, it became the first restaurant in Trondheim to be listed in the White Guide Nordic, the region’s answer to the Michelin Guide.

Mat Fra Hagen is the only vegan restaurant to grace Bakklandet, and is situated close to Bakke Bru. With the goal of promoting sustainable eating, it opened its doors in October 2014, but sadly had to shut due to bankruptcy. Now, the restaurant, which serves 100 percent plant-based food, has reopened with new owners. They wanted to combine a modern and elegant interior with a simple, tasty and plant-based menu. The restaurant often has a fresh salad bar with falafel, and a simple menu with burgers, wraps, bowls and juices. There’s also coffee and a couple of sweet treats. Mat Fra Hagen’s manager tells Culture Trip his recommendation: “My favourite is the chipotle burger!”

Baklandet Skydsstation is one of the best-preserved and most eye-catching buildings in the neighbourhood. The crooked and colourful building dates back to the 1700s, when it was believed to have been used as a transport station. Over the years, many businesses have resided here, from hatmakers to carpenters, and it was even used as a launderette. In 1997, it was transformed into a café, and is now one of the cosiest places to go for a catch-up. The interior is full of historical trinkets and knick-knacks. In 2012, Baklandet Skydsstation was named Café of the Year by National Geographic Traveler, and it’s easy to see why. It’s an idyllic and peaceful place to go to enjoy home-made food and drinks in a traditional setting. The cheerful and friendly owner, Gurli, will be more than happy to serve you up a home-cooked meal. Gurli is proud of being an independent café because everybody can “be themselves”, which is something she believes the guests appreciate. She tells Culture Trip: “Here, guests can sit down and have a chat, even though the space is tight. We can clearly see when the guests come in, look around in bewilderment and then relax their shoulders.”

Brasserie, Restaurant, European
Facebook
Email
Twitter
Pinterest
Copy link
Share
Map View
Relax with panoramic views of the Nidelva River while you enjoy delicious food created by some of Norway’s top chefs. Situated in the Scandic Bakklandet hotel, Glassgården Brasseri & Grill uses only Norwegian ingredients from local suppliers. In the middle of the restaurant, you’ll find a wood-fired oven that is used to make fresh bread and pizza. There’s something for everyone as you can enjoy both local specialities and international dishes such as reindeer and crab croquettes. Finish off with a drink in the hotel bar, Bakke. If you’re a morning person, you could opt for the breakfast buffet to start your day off right with a wide array of delicious treats.
Open In Google Maps
60 Nedre Bakklandet, Trondheim, Trondheim, 7014, Norway
+4772902000
Give us feedback

If you’re looking for something a little less traditional, walk over Gamle Bybro and take a right. Here, you will find sushi restaurant Sabrura. One of Sabrura’s biggest selling points is its impeccable sushi buffet. Eat as much as you want from the extensive and varied assortment, which includes sushi, grill skewers and salads with a Norwegian twist. Guests can rest assured that the ingredients Sabrura uses are as local as possible, with salmon from Frøya, halibut from the southwest of Norway, strawberries from Frosta and scallops from Hitra.

Kalas & Canasta is a small but cosy bistro in one of Bakklandet’s wooden houses, with guests often mesmerised by the charming restaurant’s small rooms and interior. The exquisite food is inspired by Scandinavian and European flavours with an Asian influence. Every evening, the chefs and sommeliers put together a five-course menu that changes frequently. The small and dedicated team love to experiment with seasonal ingredients, and can recommend a wine for each course. Manager Kathrine Woje Ellingsen tells Culture Trip: “If you are a regular at Kalas, you will know the best tables are the ones by the windows in the bar. Here, you can dream the day away or do some people watching.” Kalas & Canasta is renowned for its fresh fish, with Woje Ellingse noting that people come from all over to “taste the restaurant’s delicacies from the sea”.

Bar, Beer, Pub Grub, $$$
Facebook
Email
Twitter
Pinterest
Copy link
Share
Map View
Den Gode Nabo is one of Trondheim’s most popular pubs. Directly translated to The Good Neighbour, it is the perfect spot to come and relax after a day of sightseeing. With its iconic yellow exterior, it is one of the most famous wharfs of Bakklandet. Since the 1990s, a growing collection of items have found their way to every nook and cranny of the bar. The crooked floor and walls of the old wooden building add to its charm. Try a selection of drinks and pub food such as pizzas and nachos. During the summer months, you can enjoy a few drinks on the floating barge on the Nidelva River with views of the Nidaros Cathedral.
Open In Google Maps
66 Øvre Bakklandet, Trondheim, Trøndelag, 7016, Norway
+4795068322
Give us feedback 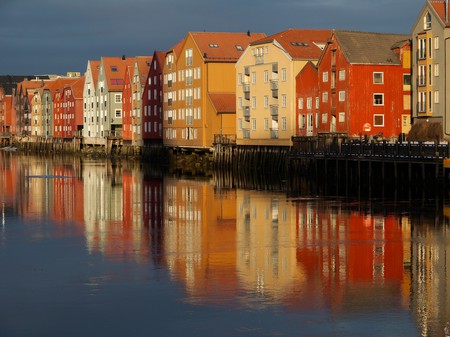