Norwegian Fashion Designers You Should Know 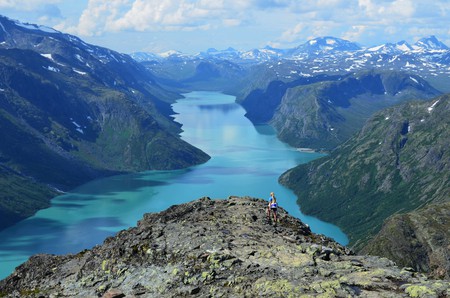 With names such as Donatella Versace-endorsed Kristian Aadnevik, award-winning Veronica B Vallenes and up-and-coming men’s streetwear label GRAA, Norway is proving itself a hotbed of design talent in the fashion industry. Read on for ten of the country’s most talented names in fashion.

Bergen-born designer Kristian Aadnevik is one of Norway’s most acclaimed fashion talents and burst onto the international scene at Milan Fashion Week in 2008 in collaboration with fashion legend Donatella Versace who named him a “Protégé of Versace.” Following his graduation from London’s Royal College of Art, Aadnevik worked at design powerhouses including Alexander McQueen and Roberto Cavalli, but today is better known for his Knightsbridge-based label, which he runs in partnership with wife and fellow designer Hila Bitton-Aadnevik. Aadnevik creates signature couture womenswear lines that effortlessly blend soft, feminine beauty with sharp, edgy cuts.

Fashion designer Lisbeth Løvbak Berg brings a fresh, new perspective to the fashion world: focusing on organic, recycled and up-cycled fabrics, she crafts environmentally-friendly designs that blend high quality tailoring and eco-ethics. Following stints at British design houses, including luxury womenswear label HEMYCA and couture bridal wear brand Phillipa Lepley, Løvbak Berg debuted her first collection ‘Decay in Beauty’ in London in 2010 and from there grew her own brand, L-L-B which through her creative, urban-edged designs aims to offer ethical clothing that lasts beyond the fleeting fashion seasons.

Following the debut of her first collection in 2006, designer Fam Irvoll’s trademark quirky and colorful designs have been worn by celebrity fans including Katy Perry and Lady Gaga and featured in high-profile magazines like Vogue Italia and Dazed and Confused. Since 2012, Irvoll has been a regular at London Fashion Week and in 2014, she collaborated with British fashion brand Topshop to stage a pop-up shop at its flagship Oxford Circus store showcasing pieces from her SS14 collection ‘Call The Exterminator’ – a wildlife-inspired line featuring bird and flower printed, cartoon-like designs.

After starting out in Paris over 20 years ago, designer Frank Remme cut his teeth working at various French and Scandinavian high-end and streetwear brands (including Christian Lacroix and Sweden’s WeSC) and in 2014 realized a lifelong dream when her returned to his native Norway and established his eponymous label, frankremme, in Oslo. Creating both womenswear and menswear lines, Remme’s designs are informed by a playful aesthetic complemented by striking, surprising elements. While his brand is still relatively young, the label is already finding its niche with style blog Fashion by Norway amongst its fans.

Search no further for cool knitwear than our Lyndsey cotton sweater for the coming spring-summer '17 collection. In this Edit paired with white versions of shorts and the amazing Jordy leather boots. #scandinaviandesign #norwegiandesign #ss17 #fashionweek #knitting #boots #lookbook #frankremme

Inspired by a love of sophisticated femininity, Stavanger-born Cecilie Melli established her self-titled brand in Oslo in 2004 with the mission of creating exquisite womenswear crafted from the finest lace, silks and other luxurious fabrics. Alongside her womenswear line, Melli also designs cocktail dresses, accessories and a beautiful bridal gown range, the latter of which features a vintage aesthetic and soft, yet edgy color palette – think creamy whites and dusky pinks contrasting with emerald greens and vibrant yellows – and has proved popular Norwegian brides-to-be. Her much-loved designs are now sold at over 40 stores throughout Norway and via her own boutique in central Oslo.

Norwegian-born, Copenhagen-based Veronica B Vallenes is a multi-award-winning designer whose eponymous label launched in 2008 combines classic Nordic minimalism and effortlessly chic Parisian elegance. Six years in, Vallenes’ designs are the talk of the international fashion circles with appearances in high-profile publications like Elle and Vogue and the talented designer has been bestowed with prestigious design prizes including Norway’s Nåløjet and the Dansk Fashion Award. Recently, the designer launched an ecologically inspired line featuring natural materials like tencel, bamboo and cashmere.

Frustrated by a lack of fashion that suited his style, designer John Vinnem began designing his own clothes in his late teens and honed his talents with his first label Zaishi – a futuristic, minimalist-inspired streetwear brand. Today he is the brainchild behind JOHNNYLOVE, the Trondheim-based menswear label he founded in 2006 with the mission of crafting designs allow men to bridge the gap between casual and formalwear. JOHNNYLOVE’s upscale-casual designs are now sold throughout Europe and he now boasts a second brand store in Oslo, in addition to the label’s flagship Trondheim studio and showroom.

Acclaimed Norwegian designer Eva Emanuelsen established her brand, Epilogue by Eva Emanuelsen, in 2004 and focuses on ready-to-wear women’s fashion with a classic, minimalist-chic tailored aesthetic. In 2013, Emanuelsen was recognized with the prestigious Nåløyet Design Award for Best Fashion Designer, which celebrates the very best in Norwegian design, and 2014 brought further success with the opening of her flagship concept store in central Oslo and a show at Berlin Fashion Week as part of a collaboration between Showfloor Berlin and the Norwegian Fashion Institute to raise the profile of Norwegian designers on the German and international fashion scene.

A video posted by Epilogue by Eva Emanuelsen (@epiloguebyevaemanuelsen) on Sep 10, 2016 at 9:11am PDT