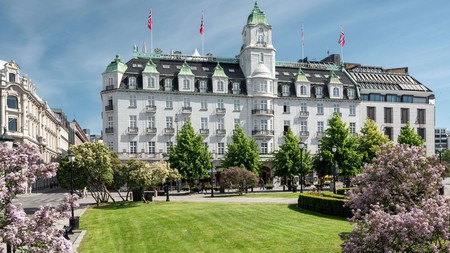 Oslo, a key cultural centre for both Scandinavia and Europe, offers a wide variety of well-heeled places to stay where art is just as highly prized as a good night’s sleep.

Famously home to Edvard Munch, the enigmatic and iconic painter, Oslo has much to offer on an artistic and cultural level. Indeed, many of the city’s best hotels use this rich artistic heritage as a jumping-off point for their designs and services, with the best art and culture hotels in Oslo more than enough to make your stay something to scream about. 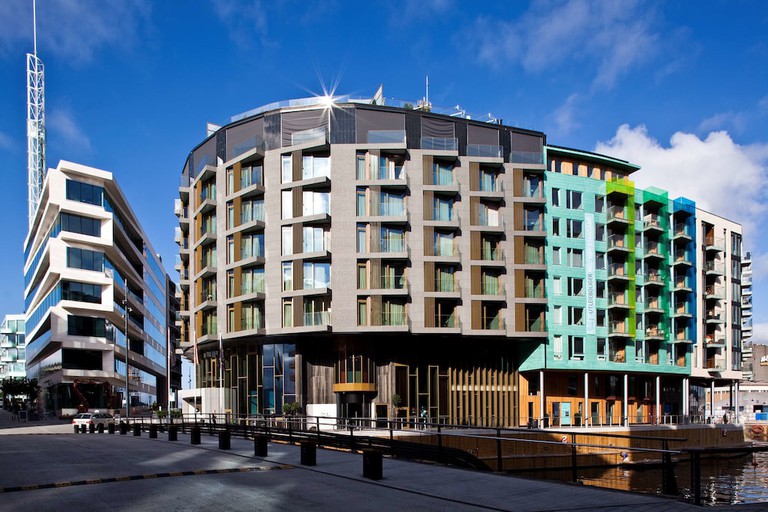 © Mattias Hamrén and Jason Strong
View More
Price Drop
Now from $348 per night
Offering the best harbour views in town, sophisticated design hotel The Thief sits on the peninsula island of Tjuvholmen, next to the Astrup Fearnley Museum. Sitting in prime position in the lobby is Richard Prince’s ‘The Horse Thief’, giving a good indication of the artistic credentials of this supremely modern hotel. Venture further to find works by Andy Warhol and Jeff Koons not to mention gorgeous furniture designed by the likes of Antonio Citterio and Tom Dixon. Check out the Music Unplugged evenings for the best in upcoming new artists.
More info 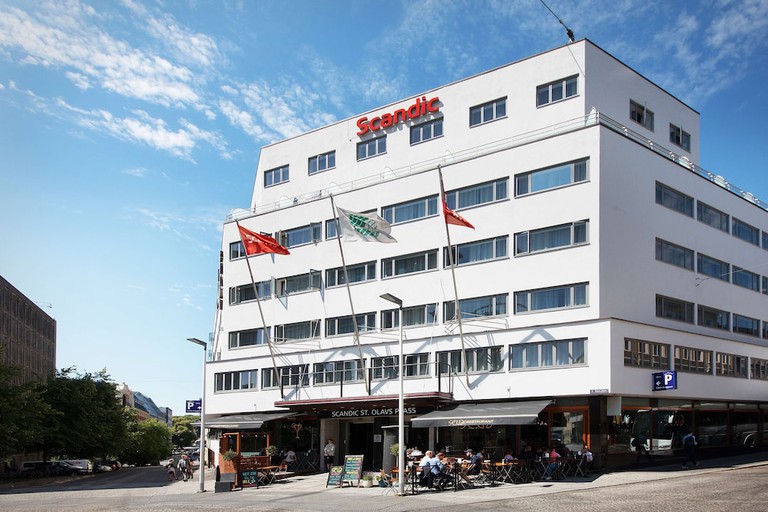 Courtesy of Scandic St Olavs Plass / Expedia.com
View More
Price Drop
Now from $104 per night
This modern hotel is located just around the corner from Karl Johans Gate, the main thoroughfare of Oslo’s bustling centre. For a peek into the city’s cultural past, check out the excellent reconstruction of Henrik Ibsen’s apartment at the Ibsen Museum, a few minutes walk away through the Royal Palace Gardens. Or book a seat at The National Theatre and join Oslo’s arts community as they dine at the lively Theatre Café, famous for the many legendary artists, authors and actors who frequent its Viennese-style tables.
More info 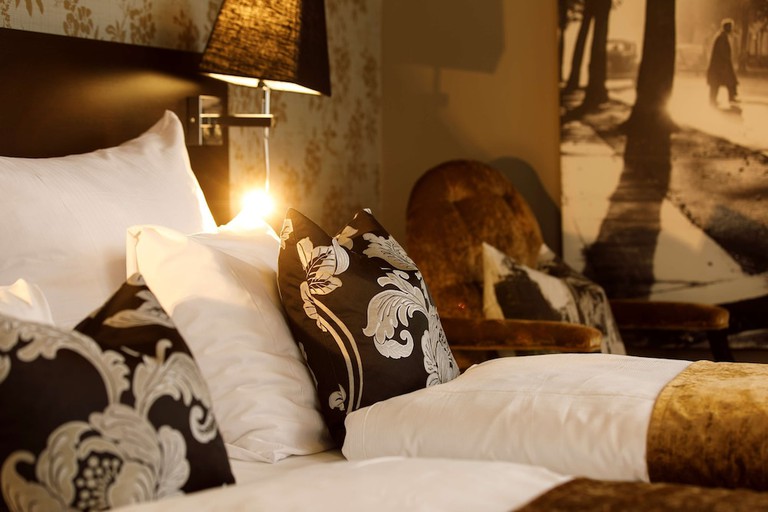 Courtesy of Saga Hotel Oslo / Expedia.com
View More
Price Drop
Now from $125 per night
Tucked behind the Royal Palace, this stylish boutique hotel offers a charmingly eclectic mix of modern and historic design. Its convenient location on a shady tree-lined street makes this mid-size hotel a traveller’s favourite. Don’t miss the nearby Vigeland Sculpture Park with over 200 of the artist’s sculptures, including the irresistibly lovable Angry Boy. The park is free to enter and you can reward yourself afterwards with a craft ale from one of the microbreweries nearby.
More info 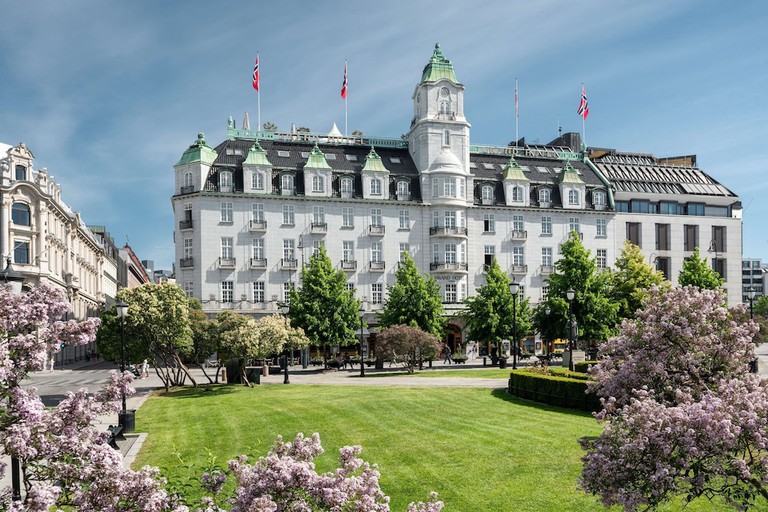 Courtesy of The Grand Hotel / Expedia.com
View More
Price Drop
Now from $246 per night
The Grand’s impressive Rococo banquet room is renowned for being one of the most opulent in Norway. The dramatic Venetian chandeliers and dark, Italian silk tapestries have borne witness to countless prestigious events, such as the homecoming of one of Norway’s favourite sons, heroic explorer Roald Amundsen. In fact, the illustrious Nobel Peace Prize gala dinner is held here every year. Having undergone extensive renovations, the hotel’s central location, cultural significance and first-class service make for an exceptional visit.
More info 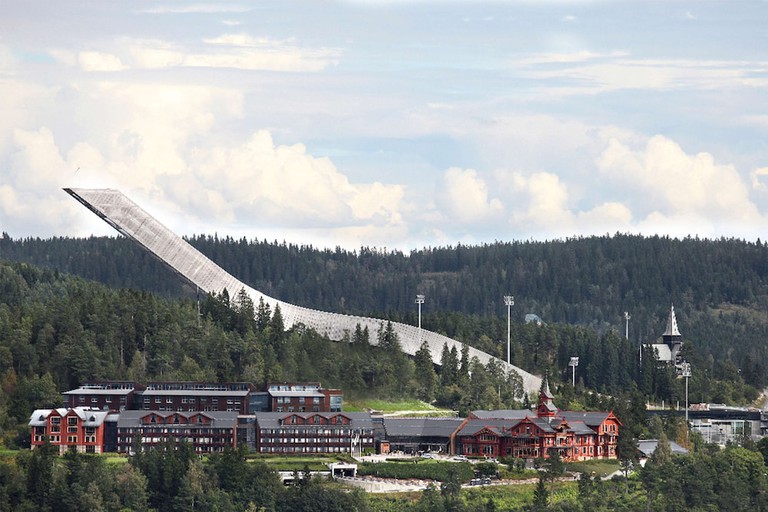 Courtesy of Rica Holmenkollen Park Hotel / Expedia.com
View More
Unavailable for the next 3 months
Located next to Oslo’s iconic Holmenkollen Ski Arena, the Rica Holmenkollen Park Hotel is a beautiful hotel that fuses history with contemporary elegance. The oldest section of the hotel dates back to 1894 and the architecture celebrates this through its evocation of the old Norwegian ‘dragon style’. Its elevated location above Oslo provides guests with breathtaking views of the city and the Fjord, while the nearby Nordmarka forest and the tranquil atmosphere of the hotel make it the perfect destination for those wanting a more relaxing experience. The hotel’s history offers a fascinating tale, it was originally built as a sanatorium for tuberculosis patients and was burned down in 1914; the hotel’s welcoming staff will happily enlighten visitors of this captivating story.
More info 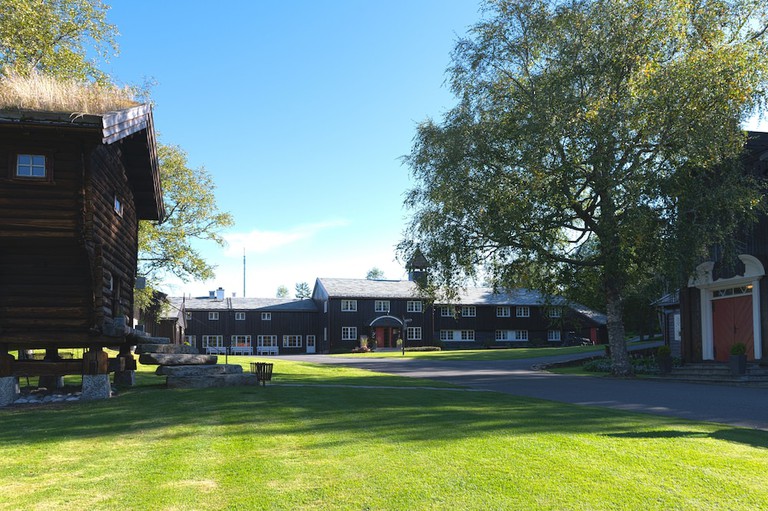 Courtesy of Lysebu / Expedia.com
View More
Price Drop
Now from $174 per night
Located away from central Oslo and surrounded by stunning Norwegian forest, Lysebu is both a hotel and a cultural destination. The hotel’s history dates back to World War II, as it was built as a monument to Danish-Norwegian Co-operation as a way of thanking Denmark for the support it gave Norway throughout the war. Designed by the esteemed Norwegian architect Magnus Poulsson, the aesthetics were inspired by the traditional national architecture and are noted for conjuring images of Norwegian folktales. The interior design connects this history with gorgeous Scandinavian design and contemporary elegance. Through an arrangement with the Henie Onstad Art Center, the Lysebu also exhibits an array of artworks from both acclaimed Norwegian and Danish practitioners, further promoting its history. A destination for all of the senses, the hotel’s restaurant serves magnificent Nordic cuisine made from local and natural ingredients.
More info 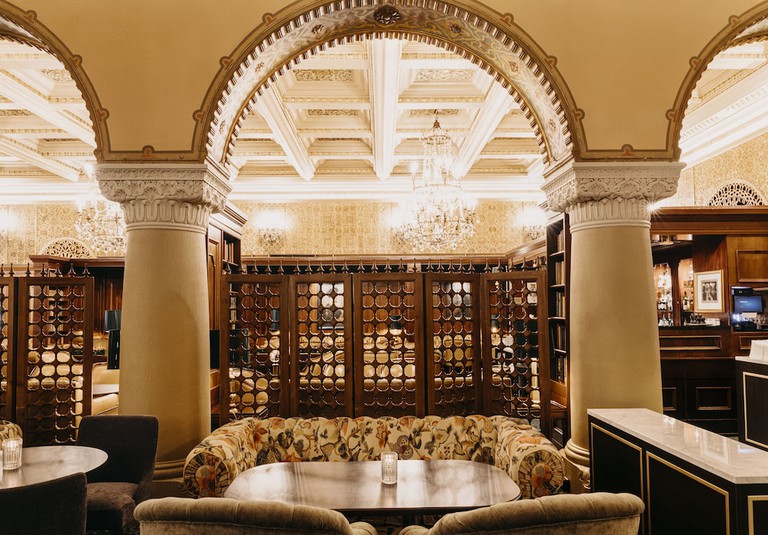 Courtesy of Hotel Bristol, Oslo / Expedia.com
View More
Price Drop
Now from $215 per night
Located in the heart of the city, Hotel Bristol is a charming venue that exudes an atmosphere of elegance and history. The hotel is proud of its 90-year past and its aesthetics emphasize this by favoring traditional, sophisticated design over contemporary trends. The hotel’s marvelous Winter Garden and Library Bar are central to the hotel’s cultural identity and are described as a place where ‘politicians, authors, musicians and actors have found inspiration since 1920. Today live music, delectable dishes and tempting cocktails can be enjoyed here while reveling in live piano performances. The location of the hotel is near unbeatable, set on Karl Johans gate and within walking distance of the Royal Palace, many museums and the waterfront area Aker Brygge.
More info 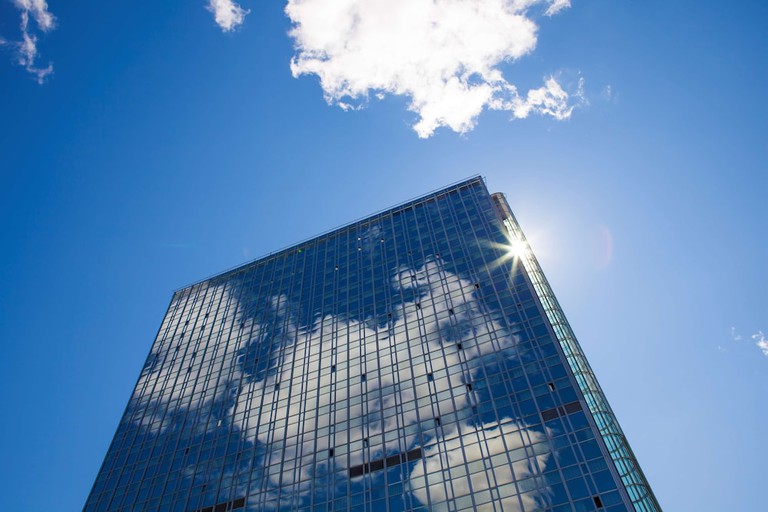 Courtesy of Radisson Blu Plaza Hotel / Expedia.com
View More
Price Drop
Now from $151 per night
The largest hotel in the city and the previous winner of both the Best International and Norwegian Hotel Chain, Radisson Blu Plaza Hotel offers a range of suites and rooms that feature sleek and modern design. The hotel stands over 35 storeys tall, allowing visitors breathtaking views of the city, while the architecture’s focus on glass means that every room offers a unique perspective of Oslo. The hotel’s 34 Restaurant and SkyBar attract both hotel guests and city visitors to their 110m (361ft) vantage point and create an intoxicating atmosphere of sophisticated interior design, sensational Nordic and international dishes, not to mention some of the city’s best views.
More info 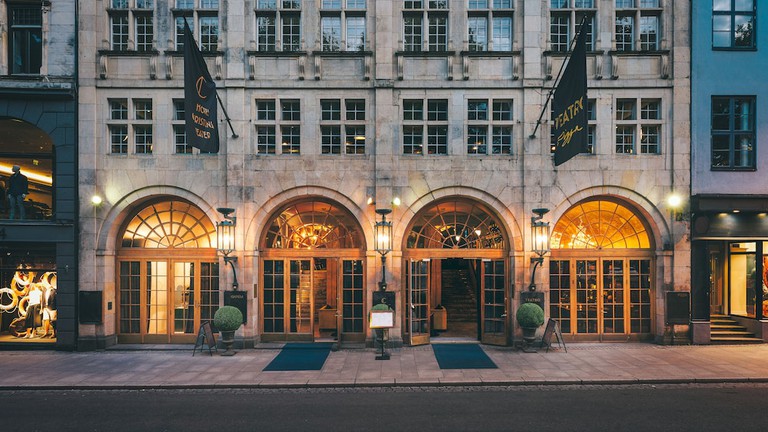 Built as a theatre and office in 1917, this chic urban hotel has culture right up to its elegant eyeballs. Sitting opposite the National Gallery (currently home to Munch’s The Scream) and the National Theatre, its downtown location is a perfect spot from which to explore everything the city has to offer. The popular Aker Brygge waterfront is moments away, with its trendy restaurants, shops and bars, while the Royal Palace is just next door.

View More
Unavailable for the next 3 months
Perched 350m (1,148ft) above Oslo, with commanding views over the city, the fjord and beyond, stands the noble Scandic Holmenkollen Park hotel. Dating back to 1894, this charming red wooden building, constructed in the local Dragestil style, offers its guests a tranquil mountain top setting far from the madding crowd. Built as a sanatorium for tuberculosis patients, it’s not difficult to see why this site was chosen. Inside, a high-ceilinged lobby serves as a gallery to some remarkable artworks and the De Fem Stuer restaurant houses several gorgeous Norwegian landscapes.
More info 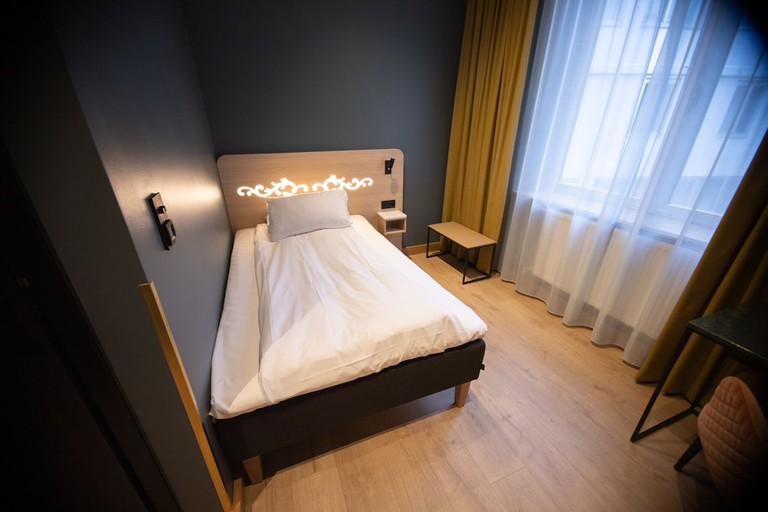 This historic hotel is closely linked to the pro-Norwegian movement and cultural life in Oslo. It was established during the late 19th century when the hotel provided a home for young people coming to the city in search of a better life. This legacy lives on today, with a percentage of the profits from the hotel going towards financing theatre, music and dance projects. In each of the 145 rooms hangs a portrait and key text from a cultural figure connected to the hotel’s history in its ‘Literary Project’. 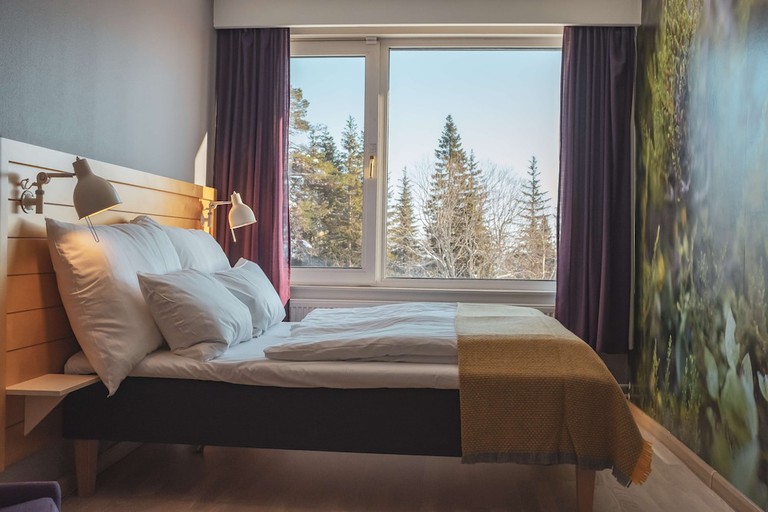 The extensive art collection housed within this modern hotel is as good a reason to visit as the ski trails and mountain-top views. The Nils Holgersson restaurant, high above Holmenkollen, offers breathtaking views over Oslo, as well as the best locally sourced seasonal ingredients. Although a little out of the city, the short drive is worth it for the fresh air and spectacular panoramas.