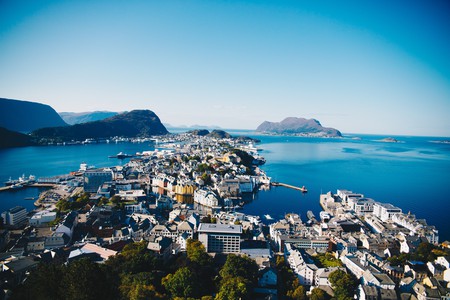 People in Norway don’t get stuck in traffic, ever: the country is just not densely populated enough for that. So when things like ‘traffic chaos’ happen, they actually make the news. Here’s what you need to know about the picturesque town of Ålesund, an unusual influx of tourists in July and the traffic blockage that kept the local police on their toes.

From the Fjellstua viewpoint, in Western Norway, you can see the whole of Ålesund town. It’s a very popular site, known to attract as many as 12,000 tourists in a single day. But this July, things got just a bit out of hand; according to local broadcaster NRK, four cruise ships carrying thousands of tourists arrived almost simultaneously in Ålesund. The tourists consequently boarded thirteen buses, that all tried to reach the access road to Fjellstua at the top of Mt Aksla.

With the access road being rather small and uphill, a total traffic blockage ensued with no vehicles being able to go in or out of the area. A driver from one of the sightseeing services that brought tourists to Fjellstua said that they didn’t manage to stop the first bus going out, and then “it got crowded”. NRK further reports that Stig Arild Roald, the local traffic director, said that to avoid traffic chaos ensuing again, “the bus trips must be spread out better so that not so many buses are sent up at the same time.” Of course the police were called right away to assist, and the issue was resolved with no unfortunate incidents – apart from long delays for everyone involved. 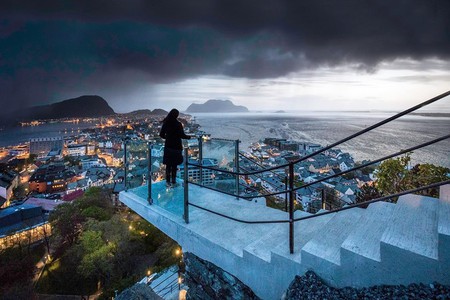 One of the most popular attractions in the region: the 418 steps to Mt Aksla viewpoint | © Arnfinn Tønnesen Photography, Courtesy of Ålesund & Sunnmøre

The allure of Ålesund

By now, you may be wondering, “Why Ålesund? How come the traffic chaos didn’t happen in one of Norway’s more famous attractions like Trolltunga – or anywhere in Oslo?” Well, Ålesund is very popular with travelers, it has repeatedly been called, “one of the most beautiful towns in Norway” because of its art nouveau architecture. After being destroyed in a large-scale fire which consumed most of the town, Ålesund lined its streets with brightly colored art-nouveau houses, where the roofs are peaked and arched and the building façades are not shy of decorative flourishes. Of course, apart from its unique architecture, it’s also Ålesund’s location that makes it a great travel destination. Sprawling over seven islands on Western Norway, from Ålesund travelers can also enter Geirangerfjord, one of Norway’s most famous fjords that’s also been declared a UNESCO World Heritage Site. Perhaps a little traffic jam every now and then, is a small price to pay. 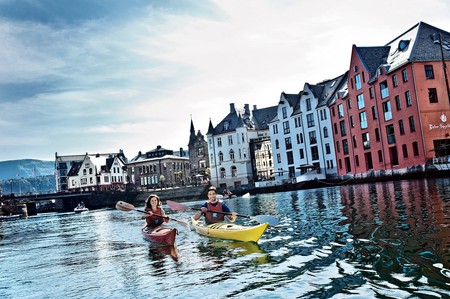