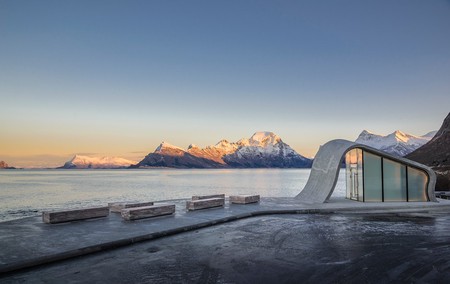 Architecture is one of Norway’s superpowers. All across the country, that distinct brand of crisp Nordic design has transformed anything from state buildings and neighborhoods to cathedrals and restaurants, into geometrical structures that manage to look both natural and futuristic. Latest case in point: Ureddplassen, a resting place, public lavatory, memorial and overall Instagram gold, along the scenic Helgelandskysten route.

There’s a good reason Helgelandskysten is one of the official Norwegian Scenic Routes. A part of Kystriksveien that runs from Steinkjer to Bodø, this coastal route is 433 km long – and one of its most beautiful resting areas is near Gildeskål. Ureddplassen has a nine meter-wide terrace that provides a perfect viewpoint towards the fiord, the open sea, and the “Lofoten Wall” in the horizon. This is a place where the Midnight Sun will wow you in the summer, where the birds will enchant you in spring with their song, and where the Aurora Borealis will take your breath away during the long winter nights. An epic place like this attracts a lot of travelers, so any facility built in or around it would have to be beautiful enough to complement the area. 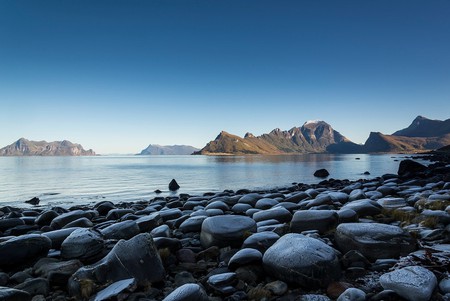 The goal was for Ureddplassen to become “a place for a short break, a nice rest, and a picnic” – a place where you can sit and marvel at the Midnight Sun or the Northern Lights. But how could the existing site be redesigned in a way that aligns with the Scenic Route standards of architectural quality, yet at the same time remains functional for the public? The architectural firm of Haugen/Zohar envisioned the solution in “an amphitheater, enabling a unique view (that) leads down to the beach area”. The area now consists of a large concrete terrace facing the sea (with redesigned steps that make the shoreline accessible), marble seating benches, and a “wave-shaped toilet building with glass walls, that is beautifully lit in the dark”. 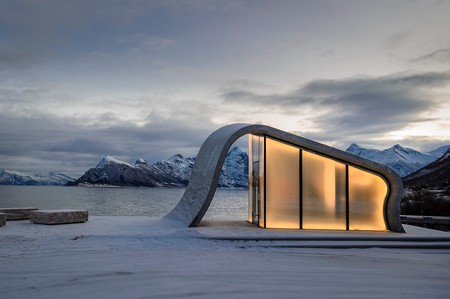 The new Ureddplassen in the Helgelandskysten area, by Haugen/Zohar Arkitekter, lit up at night | © Steinar Skaar, Courtesy of Statens vegvesen

Ureddplassen is so much more than just a resting place and a lavatory for travelers – it’s a World War II memorial. It’s here that the submarine “Uredd” hit a mine while on its way to carry out a sabotage operation in Sulitjelma. The name itself is a reminder of the place’s gravitas, as Ureddplassen means “fearless place” in Norwegian. So the Uredd monument was rebuilt on the terrace with the new marble plinth, the revamped area providing an appropriate canvas for this important historical memento. And when the lavatory building lights up during those long Polar Nights? It looks fierce – and fearless. 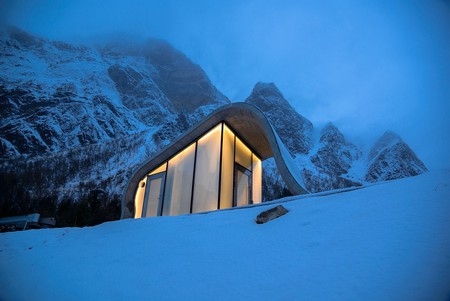