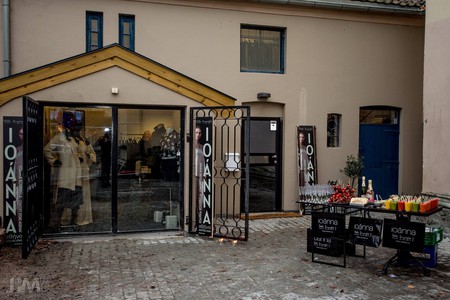 Fashion can do many things. It can transform your mood. It can make you feel part of a community. It can also bring two countries at opposite ends of Europe a bit closer together – thanks to Ioanna Kourbela, a Greek fashion designer. And Torunn Beate Berge, along with her partner Svein Rosseland, are bringing Ioanna’s unique Greek brand to a Norwegian audience.

Ioanna Kourbela has a background in architecture and that’s visible in the clothes she makes. Ever since she started in 2003, her unique style is recognisable; something about the angles, the volumes and the sharp cuts. Her clothes are not influenced by trends – they’re created so that they can be perfectly combined with other brands.

It was 2005 when Torunn Beate Berge, now the founder, owner and CEO of Ioánna Norway, was shopping at a store in Nice, France. ‘A jacket caught my eye. I inquired about it […] and learned that the jacket was designed by Ioanna Kourbela’. Five years later, while on vacation in Chania, Crete, Torunn came across the jacket yet again – along with the rest of the Ioanna Kourbela’s collection.

‘I knew then, this is what I wanted to do with my life: I was looking for something in fashion to combine with my work as a psychologist, and this seemed perfect. My late husband was really supportive, so when we got back home, I started sending messages to the team in Athens. I had no background in fashion or a shop, so it was difficult for them to take me seriously – but they saw how passionate I was. In 2012 we went back and came to an agreement with the brand. We opened the store in Tjøme, a summer town just outside Tønsberg. But soon after that my husband passed away. The store and the clothes kept me sane during that time, so I decided to keep doing this. That’s when I met Svein, and his background made it really possible to grow the brand. [Svein] fell in love with the clothes, and the family that was creating them. But it was hard to maintain the shop in Tjome in wintertime. After a couple of pop-up stores, we realised we had to be in Oslo. So we found this beautiful store that really suits the vibe of the brand.’

Svein Rosseland, market manager and co-owner, is a visual artist with a background in photography and graphic design, and was taken by Torunn’s vision. ‘Ioanna loved it, so did her sister Anastasia. Because this is a family business, Ioanna is designing, Anastasia is in charge of the international markets, and Stella of the shops in Athens. They are 42 people in total, they don’t want to be bigger. It’s important for them to be able to control the production line and produce sustainable, high-quality fashion; the brand is currently getting an EU sustainability certificate’. We asked him to elaborate more on this new venture. 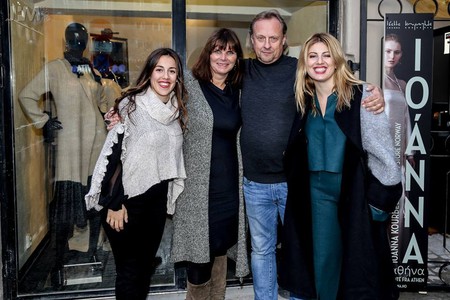 Ioanna Kourbela is a well-known fashion designer in Greece, which is a very different market to Norway. What excited you the most about bringing these clothes to Oslo? What has been the greatest challenge so far?

It was scary, but it wasn’t a business decision per se. It was based in real, personal connections. The brand spoke to our heart right away, we thought it was so genuine and so special that Norwegian women had to discover it.

Is there any item of clothing that has been particularly well-received by your customers?

The 2550, a wrap cardigan that you can wear in 25 different variations. The thing about these clothes is, you have to try them on. It requires time; it’s a different way of shopping than most Norwegian women are used to. Most will acknowledge they’re seeing a very nice dress, a dress that they can afford and would like to wear, but then they’ll start thinking if they’re brave enough to actually pull it of, to stand out and be looked at. Whereas Greek women, if they see something they like and they can afford it, they buy it. Norwegian women are not that spontaneous. The culture of janteloven still plays a big part here, the need to not be that different from your peers. But things are changing.

What is the woman who wears Ioanna like? How would you describe her?

She is open, cultural, interested in music, arts and design. She cares about the environment and about sustainability. That’s part of our pitch to new clients, when we try to explain the brand: they can buy high-quality, sustainable fashion at prices that are definitely affordable for Norway and that help the Greek economy, as everything is produced in Greece.

And how would you describe the style of Oslo women in general? Are there differences depending on the zip code?

Not so much within Oslo, but in other areas of Norway, yes. For example, clothes that would work well in our store outside Tønsberg, wouldn’t do so well in our summer pop-up stores, and vice versa. Tjøme is a summer destination where many Norwegians have summer houses. And it’s the same people we’d encounter in our shop in Oslo, but in Tjøme, because they’re on holiday, they’re so much more relaxed and open to new fashion ideas.

Do you see the Ioanna brand expanding to other Scandinavian countries? What do you think about Scandinavian fashion tradition in general?

Right now we are focused on growing our Oslo shop. Of course we need new projects and challenges, we are in a constant dialogue with Athens on what could be next. Generally speaking though, Denmark has a big fashion tradition, mostly because they don’t have natural resources (like Norway with oil) and they have been more connected to Europe. As has Sweden. But I think that in the last two decades we are catching up, we have more international influences, we’re becoming more open. Apart from developments in fashion, food and architecture, Oslo is becoming one of the most exciting music destinations in Europe.

Speaking of which, where do you go in Oslo for creative inspiration?

Just around the corner. I’m not kidding. It’s very important to establish a connection with our neighbouring stores, to get to know them and potentially do something together in the future. You hear people talking a lot about competition in business, but we believe it’s all about synergy.

You can find the Ioanna Oslo concept store at Underhaugsveien 28 (entrance from Hegdehaugsveien) in Oslo. You can also find the latest summer collection on their website, ioanna.no.