How To Celebrate Christmas In Norway 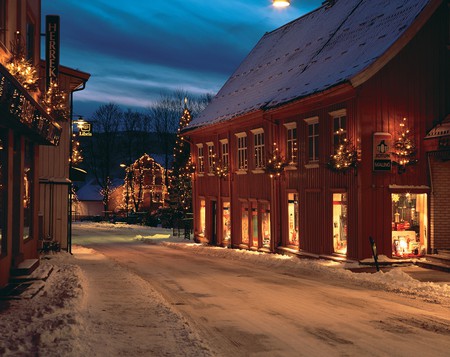 While Norway is predominantly a Christian country, Christmas wasn’t celebrated here until about the 10th and 11th centuries. Before then, people celebrated yuletide in the middle of the winter, and drank beer in honour of the Norse gods, waiting for the warmer weather to return. It is believed that the word Yule derives from the Proto-Germanic language, but the etymology of the word remains uncertain. To this day, Christmastime is still called juletid in Norway – and while it has preserved some Old Norse traditions, it is also influenced by hundreds of European and American Christian practices. Here’s our guide to celebrating Christmas in Norway.

Advent is a preparation period before December 25 which starts four Sundays before Christmas. Every Sunday up until Christmas Day is commemorated by lighting a four-candle candelabra. On the first Sunday the first candle is lit, on the second Sunday the next two candles are lit, and so on.

A nisse is a mythological creature from Scandinavian folklore, which could be compared to a garden gnome or a goblin. According to tradition, they are present in farmhouses in which they act as guardians of those living there and even occasionally help with house chores. They were believed to be the ‘soul’ of the first person living in the property, and are described as small creatures resembling old men with long beards and red conical caps. Nisser are a typical character from Old Norse culture and are also associated with the winter solstice. Today, they have been assimilated into Christian culture in Scandinavia and appear in Christmas tales, decorations, and cards. Santa Claus, known in Norwegian as Julenisse, is himself a sort of nisse.

Stay in on Lille Julaften

On December 23, Norwegians celebrate Lille Julaften, or Little Christmas Eve, a time when the family comes together to clean and decorate the house and tree. Ornaments include heart-shaped Christmas baskets filled with goodies, paper chains, and Norwegian flags. Family members also decorate their home with pepperkakehus, or gingerbread houses, which Norwegians refrain from eating before the end of the Christmas season. 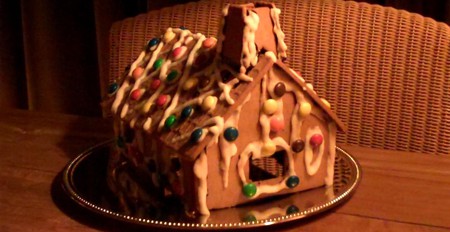 Known in Norwegian as Grevinnen og Hovmesteren, Dinner for One is a British comedy sketch written by British author Lauri Wylie. The German television station Norddeutscher Rundfunk (NDR) recorded an 18-minute black-and-white performance of the show in 1953, which eventually became the most repeated TV program of all time. The sketch depicts the 90th birthday of Miss Sophie, who hosts a yearly dinner for her friends. Due to her old age, she has outlived them all, so her butler James impersonates and drinks instead of each of the guests. As he goes around the table, James gets noticeably drunk, and repeatedly asks Miss Sophie: “The same procedure as last year, Miss Sophie?” to which she responds: “The same procedure as every year, James!”

Norwegian national television NRK has been broadcasting the 11-minute Swiss version of the sketch every December 23rd since 1980. Today, families still come together every year on Little Christmas Eve to watch this sketch.

Dance around the Christmas tree on Julaften

Julaften, known as Christmas Eve in English, is the main day of celebration for Norwegians. The Silver Boys Choir (Sølvguttene) appear on national television for their annual festive concert, and at 5pm church bells ring throughout the cities to announce the official start of the holiday. After their traditional meal, people usually hold hands and dance around the Christmas tree while singing carols. The most famous song is Så går vi rundt om en enebærbusk, meaning ‘here we go round a mulberry bush.’ Julenissen, or Santa Claus, then comes into the living room to hand out presents. The family and guests then play games, sing and open gifts the rest of the evening. 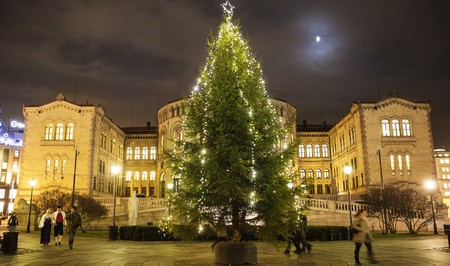 Since 1975, NRK shows Three Gifts for Cinderella every Christmas Eve. Similar to Dinner for One, it has become a holiday classic in Norway although it is not a Christmas movie per se. The movie is based on Bozena Nemcova’s version of the tale of Cinderella, with a feminist approach in which the prince actively pursues the skilled hunter Cinderella before she falls under his charm. The film was originally released in Czech and German, but NRK broadcasts it in Norwegian.

Many Norwegians have flagpoles in their gardens and raise the national flag for special occasions. On Christmas Day for instance, people typically raise the flag at sunrise and take it down again for sunset. They then go and visit family and friends for a traditional Scandinavian dinner. 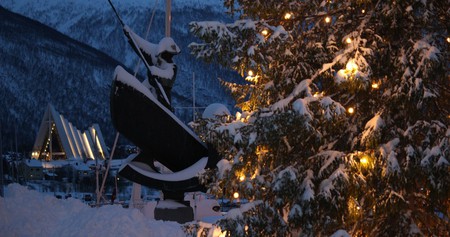 Typical Norwegian Christmas dishes include risengrynsgrøt, ribbe, pinnekjøtt, lutefisk and rakfisk. Risengrynsgrøt is Norwegian rice porridge usually prepared for lunch on Christmas day. It is served with sugar and cinnamon and a dab of butter in the centre. An almond is hidden in the large pot, and the person who finds the it in their portion traditionally receives a marzipan as a gift. Ribbe are pork ribs, and Pinnekjøt, or Stick Meat, consists of salted or dried lamb ribs that are soaked in water for approximately 30 hours before consumption. Similarly, lutefisk is dried cod, stock fish or clip fish that is soaked into a solution of lye in order to rehydrate it before eating. It has a gelatinous texture, both loved and loathed by Norwegian people, who seem to agree that ‘once a year is enough.’ Lutefisk is traditionally served with fried bacon, mashed green peas and boiled potatoes. Finally, rakfisk, considered a Norwegian delicacy, is probably one of the world’s smelliest fishes. It is heavily salted trout fermented in water for up to a year. It is then eaten raw with a glass (or several) of aquavit.

Akevitt, known as Aquavit in English, comes from the Latin aqua vitae, meaning ‘water of life’. It is a traditional Scandinavian distilled drink containing 40% alcohol, drunk almost exclusively at Christmas. In Norway and Denmark the beverage is made from potatoes, easily identifiable thanks to its golden colour and strong mixture of spices, with caraway the most fragrant one. It is served in addition to beer or with traditional food in tulip-formed glasses.

Romjulen is the time between Christmas and New Year’s Eve. During this time, shops are usually closed or have limited opening hours, with Norwegians typically heading to the slopes for skiing and sledding with their families. 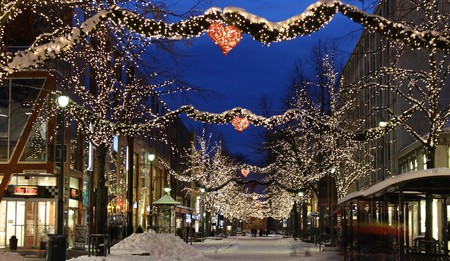