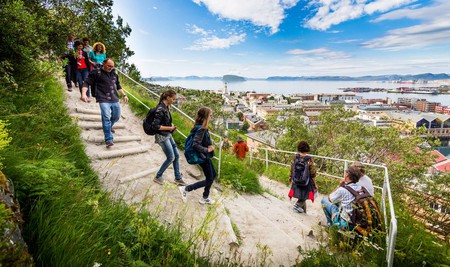 All Northern Norway towns are tough due to weather and lack of sunlight. Hammerfest, however, raises the bar. Read on for a brief history of the harbour town that has been through a British and a Nazi invasion, a hurricane and two fires that almost burned it to the ground.

The town at the end of the world

Finnmark county is Norway’s true north. Located in the north-easternmost part of the country, Finnmark borders both Finland and Russia — and a big part of it is Sami territory. Finnmark is both the largest and the least populated county in Norway, so to reach Hammerfest you will have to traipse over hundreds of kilometres of coastal nothingness. And when you suddenly spot the town, you will be surprised for more than one reason. 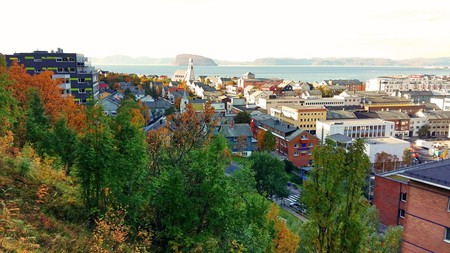 See, Hammerfest doesn’t look like most Northern Norwegian towns. The architecture is different as it’s more modern; from the church that brings to mind a stockfish rack to the Arctic Culture Centre in the waterfront that completely transforms with the use of LED lights at night. What made a town of just 10,500 people in Norway’s far north opt for such an unusual architectural approach? Quite a few disasters of biblical proportions.

Famine, fire, a hurricane… and Nazis

Hammerfest’s history – as well as Finnmark’s – goes back to about 10,000 years. Due to the warm waters of the Atlantic Gulf Stream, the port of Hammerfest didn’t freeze as did the ports in most northern Norwegian coastal towns. This facilitated seal and whale hunting, which was the area’s main trade up to the 18th century. Hammerfest was officially chartered as a town in 1789, making it the oldest northernmost town in the world. It got the attention of foreign merchants and consulate officers and was considered quite the cosmopolitan destination — up until the Napoleonic wars. 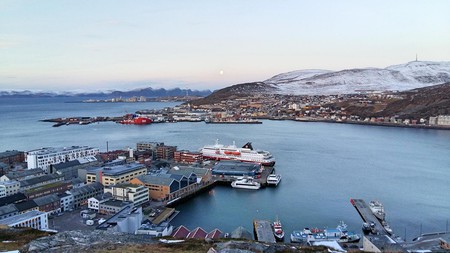 As the town aligned itself with the French, the British overrun the port and looted the city in 1809, leaving the people of Hammerfest to starve. And that was just the first of many subsequent tragedies. In 1856, a hurricane struck the area and the whole town had to be rebuilt. In 1890, two-thirds of the town was destroyed again, this time by a fire. Hammerfest was rebuilt once again and turned disaster into opportunity by becoming the first town in Northern Europe to introduce electric lighting. Gammelveien, a trail around Mt Salen that is still popular among visitors to this day, was constructed during that time.

But the worst disaster of all happened during the Second World War. As Finnmark borders Russia, the German forces that had invaded Norway used Hammerfest as a boat base. When they withdrew in 1944, the fleeing Nazi soldiers used their ‘scorched earth’ strategy so as to deny the Russian Army access to any food, supplies, shelter or means of communication. Hammerfest was burned to the ground and its people, now homeless, were forced to evacuate to southern Norway.

A bright future for Hammerfest

So how is this town still here? It boils down to the relentlessness of its people, and their sense of community. In 1945, when peace was declared, a part of Hammerfest’s population returned to rebuild the city once again. A visit to Gjenreisningsmuseet, the museum that documents the reconstruction for Finnmark and North Troms after World War II, attests to that. The rebuilding took place fast, with the first buildings and houses ready within a matter of weeks. As a result, the town’s architecture is distinctly more modern. 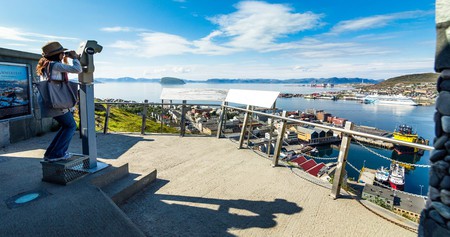 During the 1980s, Hammerfest became a gateway to the newly found oil and gas in the Barents Sea. In 2007, an LNG plant (liquified natural gas) opened on the nearby island of Melkøya. The wave of prosperity has lasted until today: Hammerfest is nowadays a popular travel destination for nature enthusiasts, as it is perfect for hiking and fishing. The Meridian Column is also located here, putting the town in the UNESCO World Heritage list. No matter why you may choose to visit it, Hammerfest has certainly earned the right to impress.