From Oslo to Bergen the Stylish Way: The Bergen-Oslo Railway 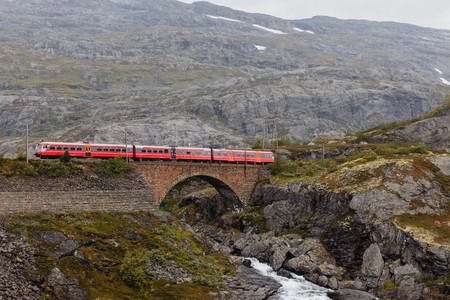 There is something quite special about gently ascending the heights of mid-southern Norway until 1,222 meters (4,009 feet) above sea level while sitting back comfortably and admiring the amazing and dramatic valleys, lakes, and mountains that slip by outside. Flying from Oslo to Bergen may be quicker and possibly cheaper, but taking the more than 100-year-old Bergen–Oslo Railway is an experience in itself.

A Bit of History

Thanks to the difficult terrain and the vast size of Norway, it took nearly 40 years from the first plans being proposed to the opening of the main railway line in 1909. The construction of the railway line required fierce manpower, feats of engineering performed in punishing weather conditions, and it was done in some of the toughest and most isolated wilderness in Europe. While building the middle part of the track, engineers and navvies would often have to ski for hours through the heavy ice and snow that could last through most months of the year—even with milder conditions today, riders are still almost certain to spot several puddles of snow adorning the mountain slopes that the route pass between the highest lying stations even at the height of summer.

As if that wasn’t enough, the construction teams had to design and build bridges across steep falls and hack and smash their way through mountains to create more than 180 tunnels with only simple tools and dynamite at hand. The latter was a necessity—the longest tunnel is more than 10 kilometers (6 miles) long—and made the construction process much more efficient, but it took several lives and limbs in the process. 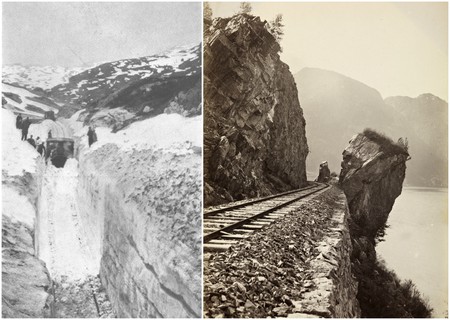 Snow on the railway line in 1908 (left) and Vossebanen detail Courtesy of Sigvard Heber / WikiCommons, and Nasjonalbiblioteket / Flickr

It is a highly unusual experience to leave sunny Oslo on a sweltering-ish Norwegian-summer day, have frosty air pierce the skin while looking out at the astonishing wilderness from the door hours later at one of the middle stations, and gradually return to the (other) coast and much milder temperatures while approaching Bergen a few hours later again.

Norway is famous for its nature and for good reason. One of Norway’s greatest advantages is its astoundingly beautiful and varied nature. See some of the best of it while crossing the country at one of Norway’s broadest points during the seven-hour journey that covers nearly 400 kilometres (246 miles) of track. The Oslo-Bergen railway has often been deemed one of the most beautiful railway journeys in the world, and it is constantly changing—from luscious greens down near the cities to the greys of the mountains, sudden-bright blue of the mountains’ lakes, the red dots from isolated-wooden houses, to patches of white, and back to green again. 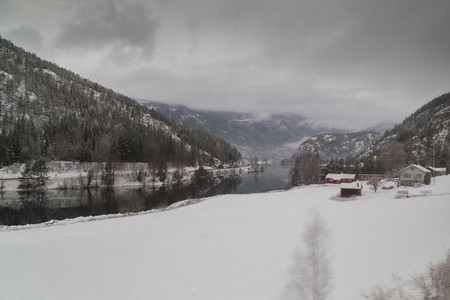 In Scandinavia, at least, its only competitor for stark beauty and incredibly stubborn engineering is the Flåmsbana, an hour-long offshoot of the Bergen-Oslo track that is even more idyllic and crosses through even more grand landscapes than its larger brother. Take the Bergen-Oslo railway at least once, and winter is no excuse because the line serves many of Norway’s most popular skiing destinations like Geilo. 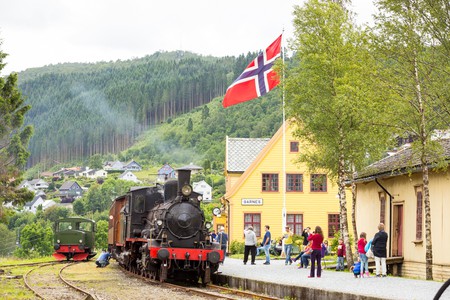