Explore Norway by Hiking Up to the Impressive Pulpit Rock

If you like living on the edge, Norway has got you covered – quite literally. Preikestolen, also known as Pulpit Rock, is one of the country’s many impressive cliffs that require an exciting hike to reach, but also offer unparalleled views from the edge once you do. Here’s what you need to know and how to get there.

What you need to know about Pulpit Rock

Preikestolen got its moniker, ‘The Pulpit Rock’, around 1900. Previously known as ‘Hyvlatånnå’ (planed tooth), the rock drew the attention of one Thomas Peter Randulff when the captain of the ship he was traveling on said it looked like a ‘preikestol’ (pulpit). Randulff decided to climb the mountainous plateau and thus started the tourist traffic in the area. A lodge was built in 1949 and a road in 1961. Nowadays, Preikestolen is one of Norway’s most famous vantage points – so much so that it was featured in the latest Mission: Impossible instalment and a special screening was organized at the top of the plateau to celebrate. 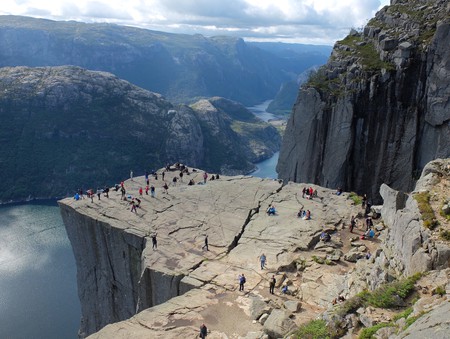 How (and when) to get there

Hiking to Preikestolen is usually done from April to October. It is possible to hike in the winter, but not recommended unless you’re very experienced in glacier hiking, carry appropriate gear (like sticks of ski poles) and have a nature guide. To get there, you can start from Stavanger: take a car ferry to Tau, and then drive to Preikestolen Mountain Lodge, where you will park your car. Then, it’s time to follow the path uphill. The terrain will be slightly hilly, with an elevation of 350 meters, but there are places where you can rest along the path – or even dive from if you feel like it. You should also time it right, so that the sun doesn’t set while you’re on your way down.

If all this sounds too stressful, you can always choose to marvel at Preikestolen from the fjord, on board a sightseeing boat or ferry. Just like Norway’s waterfalls, the country’s impressive cliffs can also be admired from the ground, or rather the fjord, up. 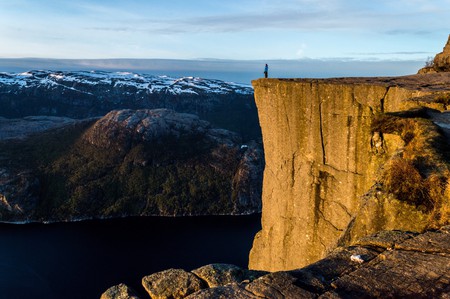