Hijab by Ahmed Umar, one of the artworks exhibited in Det felles eide | © Kulturetaten

For more than a hundred years, the municipality of Oslo has been collecting great art pieces – and we don’t just mean those that are currently exhibited in places like the Munch Museum. There are countless cultural gems and works of art spread across the city, from schools and retirement houses to public spaces and offices. All these works make up the largest art collection in Europe which, in a way, belongs to the people. The new exhibition at Kunstnernes Hus is currently showcasing the best of them.

It all started back in the 18th century, when Oslo was still called Christiania. The city invested early on in collecting prestigious works of art to adorn public spaces and there were many acclaimed artists, like Rodin, who were happy to donate statues and paintings to the Norwegian capital. Over the decades, the collection grew and today it’s one of the largest of its kind in Europe: 19,000 works of art placed in various institutions, from kindergartens and schools to libraries, parks and nursing homes. All these works of art are accessible to the public on a daily basis – but sometimes, we tend to not pay attention to art unless it’s proudly displayed at a museum.

Boxing Girl, one of the artworks exhibited in Det felles eide | © Kulturetaten

This is one of the reasons the Oslo Municipality decided, for the first time in over 20 years, to unveil a comprehensive exhibition of some of the highlights of the city’s art collection. The exhibition is called Det felles eide (The Commonly Owned). Housed at Kunstnernes Hus, it is a reflection on how art interacts with architecture, urban spaces and the people of a city. An enormous collection such as this is bound to have social, political and cultural implications – and this exhibition certainly sheds light on these issues. Perhaps even more importantly, Det felles eide tells the story of Oslo and how it developed into the modern Scandinavian capital it is today.

Metamorphosis by Hanne Friis, one of the artworks exhibited in Det felles eide | © Kulturetaten

Wandering around the exhibits, you will encounter the works of many famous Norwegian artists of old, such as Christian and Per Krohg, or Harald Sohlberg, as well as contemporary Norwegian artists like Håkon Bleken, Odd Nerdrum and Jakob Weidemann. Several Norwegian photographers (like Tom Sandberg and Vibeke Tandberg) and sculptors (Arnold Haukeland, May von Krogh) are also present through their work. It is, perhaps, a unique opportunity to see that much Norwegian talent gathered under one roof.

Among the international contributions, Auguste Rodin’s The Man with the Key definitely steals the show, although the contemporary art installations on the red wall are also very striking. 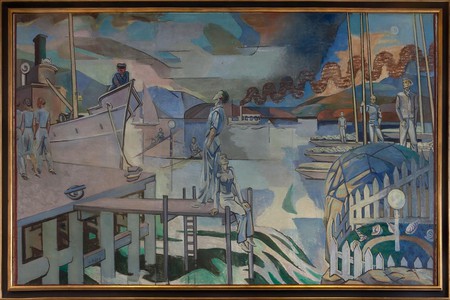 Oslo Harbour by Per Krohg, one of the artworks exhibited in Det felles eide | © Kulturetaten

The Commonly Owned: The art collection of Oslo Municipality is a cooperation between Oslo Municipality (Agency for Cultural Affairs, Kulturetaten) and Kunstnernes Hus, and will be on display until April 29. After that, you’ll just have to look carefully around you, when walking in Oslo.