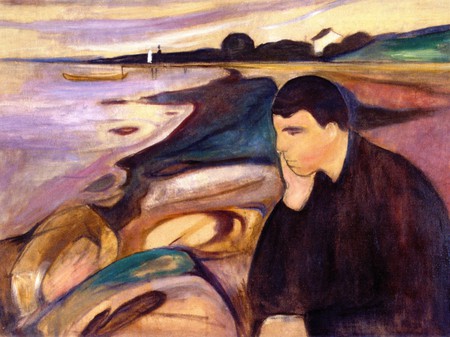 The 2012 Tate Modern exhibition Edvard Munch: The Modern Eye aimed at bringing a new perspective to the work of Edvard Munch as well as challenging the misconception that he was exclusively a ‘fin de siècle’ artist. The show identified the Norwegian as a 20th Century, modern painter who embraced and integrated in his art new media such as cinema, photography and design. 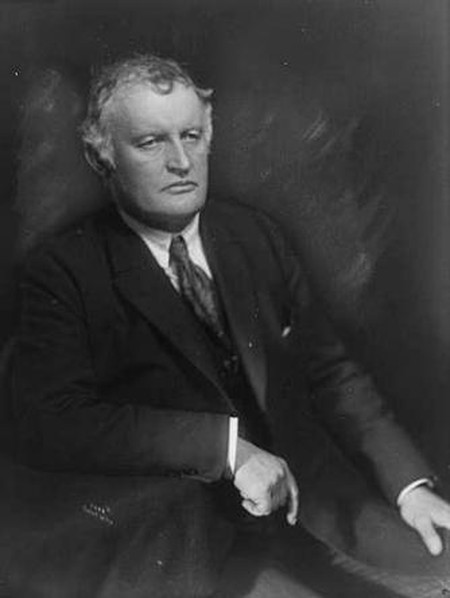 Edvard Munch (1863 – 1944) is described ad nauseam as the iconic Nordic, tormented 19th Century painter. His most famous piece, the pastel-on-board version of The Scream (1895) that sold at Sotheby’s for £73,921,284 in May 2012, depicts a deeply traumatic scene where a man screams in agony against the backdrop of a red, sinister sky. Unfortunately perhaps, The Scream series has somehow eclipsed Munch’s prolific body of work – drawings, paintings and prints that show a magnificent diversity in terms of subject, resonance and style.

Munch grew up in Christiana (now Oslo), and although excelling in sciences, joined at 18 the Royal School of Art and Design, which at the time focused on Naturalism and Impressionism. The young man had had a difficult childhood marred by chronic illnesses that frequently disrupted his academic career, and an excruciating grief upon the death of his beloved sister Sophie – who had taken the role of a mother after his own mother died when Munch was 5.

Munch’s unstable psychological and physical states often materialised in his works, and many paintings reflect the artist’s journeys of self-examination rather than being a faithful representation of the world. His haunting Self-Portrait from 1895, for instance, shows Munch’s disembodied head surrounded by darkness. Only the skeleton of his left arm is visible at the bottom of the monochrome lithograph – perhaps an allusion to the newly discovered X-Ray method. This modern version of a memento mori subtly reminds both artist and viewer that death is impending. 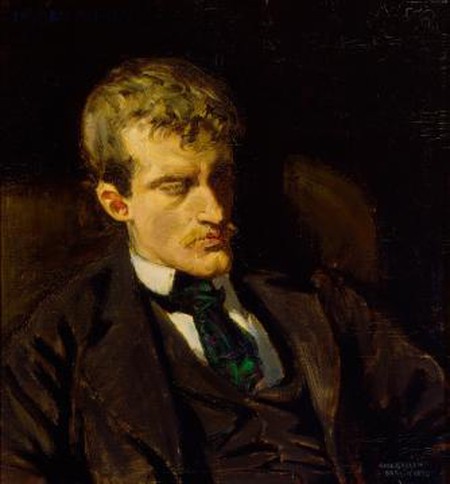 Munch’s last self-portrait, Self-portrait Between the Clock and the Bed (1940-3), contrasts piquantly with that from 1895 although they both reveal the artist’s experience of age, death and emotional distress. We see a lonely old man, looking frail and vulnerable, standing between a brightly coloured bed – denoting birth and death – and an old-fashioned clock that suggests the passing of time. The sun-filled room, whose yellow and orange tonality radiates a warm atmosphere, loses its lightness over the presence of a skinny Munch who looks like a waiter. Body decay is a recurring motif in Munch’s works, and photography also allowed him to study and record his own physical transformations.

Although he spent a non-negligible part of his later life in reclusion, Munch was continually engaged in the intellectual currents of his time. In his 20s, he connected with an anti-traditionalist circle of writers and spent some time with bohemians in Berlin and Paris. He never, however, associated himself with a single artistic group or movement –preferring to follow an independent path. New discoveries in science equally fascinated the artist, and Munch was able to adapt gracefully to the 20th Century innovations. Throughout his life, he notably showed a strong interest in optical effects: various paintings manifest a marvellous modernity through the use of distorted angles, truncated characters and amplified perspectives. 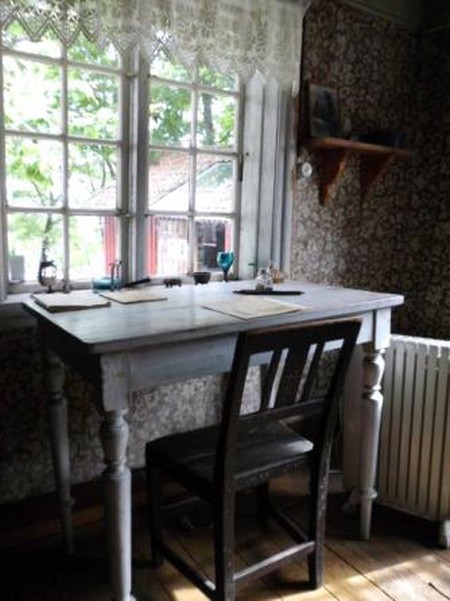 This is particularly evident in Red Virginia Creeper (1898-1900) – arguably Munch’s most avant-garde work. In this painting, a sinister landscape composed of a red house, bare trees and a white fence sits behind the figure of a man whose proximity and expression create a deep feeling of anxiety and oppression. The pictorial elements are compressed in a ‘Vertigo’ fashion, and the receding background, accentuated by the diagonal direction of the track, results in the impression that the man is assaulting the viewer. Galloping Horse (1910-12) is equally unsettling. Reminiscent of the cinematic techniques used by the Lumière brothers for L’arrivée d’un train à La Ciotat (1896), Munch’s painting features a horse fiercely galloping towards the viewer and threatening to burst out of the frame. The palpable movement of the strong animal combined with the exaggerated perspective render the work decidedly modern.

The thematically organised Tate exhibition has devoted a fascinating gallery to Munch’s reworkings. In the 19th century, it was common practice for artists to paint multiple versions of their works in order to fulfil the demands of collectors whilst simultaneously exhibiting their art. For Munch, important subjects could not necessarily be dealt with on a single canvas and he thus stated: ‘there was always progress too, and [replicas] were never the same – I build one painting on the last’. Two major series, The Kiss and The Sick Child, have been included in the exhibition. The latter carries a particular significance for Munch as it depicts his dying sister Sophie and evokes gripping memories of sorrow. The tear-filled paint drapes the scene with a hazy veil as if it was viewed through wet eyelashes, which suggests that The Sick Child reveals less about Sophie’s death than about Munch’s emotional experience of watching his beloved sister waste away. Another gallery displays the many versions of Weeping Woman: six paintings, various drawings, a lithograph, a photograph and a sculpture. Here, the Tate also pays tribute to Munch’s extraordinary talent as a multidisciplinary artist and a skilful draughtsman. In the tradition of the standing nude, Munch depicts a vulnerable, weeping woman awkwardly standing in a room whose nauseating patterned wallpapers and flat perspective project a feeling of unease, even claustrophobia. The obsessive replication of the work also contributes to this feeling by forcing the woman to endlessly repeat the same bleak scene. 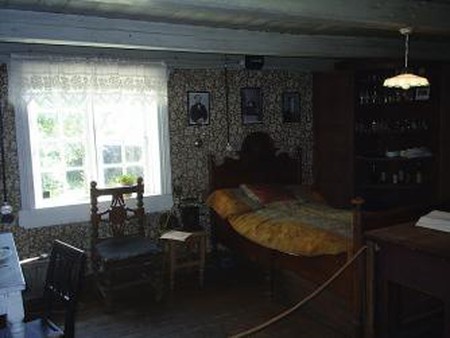 However, Munch’s body of work is not limited to sombre, elegiac paintings, and even less so after he recovered from a nervous breakdown in 1908-9. His flowing brush and vibrant colours have produced some ravishing landscapes such as New Snow on the Avenue (1906), a quite pleasant scene with aerial snow, smooth angles and a ‘marshmallowy’ palette. Other exquisite works include Black and Yellow Men in the Snow (1910-12) and Starry Night (1922-24). The latter records Munch’s stunning view from the steps of his studio in Ekely. Although he grew increasingly famous in the 1910s, Munch chose to spend most of his last two decades there, isolated from the world, in the company of his paintings – paintings that he cherished so much as to refer to them as his children. But even in his reclusive outpost of Ekely, Munch remained attuned to events in the outside world, from international political affairs to everyday scenes. This is evident in works such as Uninvited Guests (1932-5) and Panic in Oslo (1917), the latter of which chronicles the social unrest provoked by fear of shortages in Norway during the Second World War.

The last decades of Munch life saw him suffer various illnesses, including the Spanish Flu and an haemorrhage in his right eye in 1930 that deeply scared him because it had the potential to end his painting career. Munch reportedly said at the time that he would rather lose both arms than his sight. Unsurprinsingly, his temporary handicap became the subject of a series of interesting paintings experimenting with partial vision – anxious and estranged scenes in which the recurring motif is a sort of vulture, both beautiful and terrifying, that could be interpreted as the dark form in front of Munch’s eye. Despite a life of physical and emotional turmoil, Munch lived to the age of 80 years old and died peacefully in Ekely after bequeathing the entirety of his personal collection to the city of Oslo. The artist was made a Knight of the Royal Order of St. Olav for his hypnotic body of work.