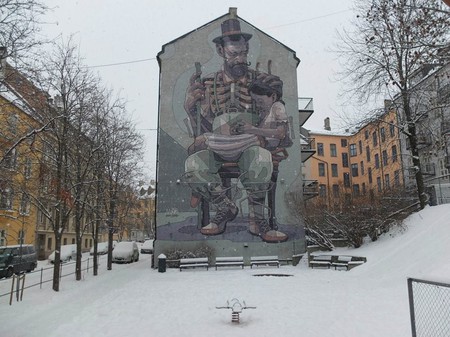 Oslo is the perfect place for many things, one of them being street art. See, thanks to the housing crash of 1899, the city of Oslo paused the building of any structures between existing apartment buildings, leaving a lot of large, gable walls as a result. These walls, unadorned by windows or staircases, became the perfect canvas for Oslo’s booming street art – which, in the beginning, was primarily the turf of local artists such as Dolk (whose work can now mostly be found in galleries) but have now become a playground for artists from all over the world.

Untitled by The London Police

British artist duo The London Police’s work has graced more than 35 countries (both galleries and walls) in the 10 years they’ve been active. In 2011, they brought some of their signature smiley faces to Oslo. You will find them at the beginning of Bygdøy allé. 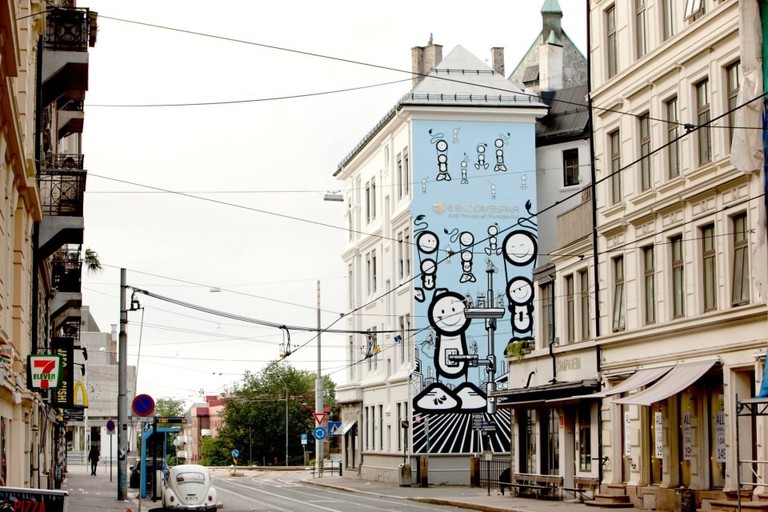 Garbages elk Vs hunters by Zed1

Italian artist Zed1 (aka Marco Buressi) has a very unique visual language and a great sense of humour. He has done a couple of murals in Oslo, but in this particular one from 2012, situated north of Torshov, you can probably tell what Marco thinks about hunters. 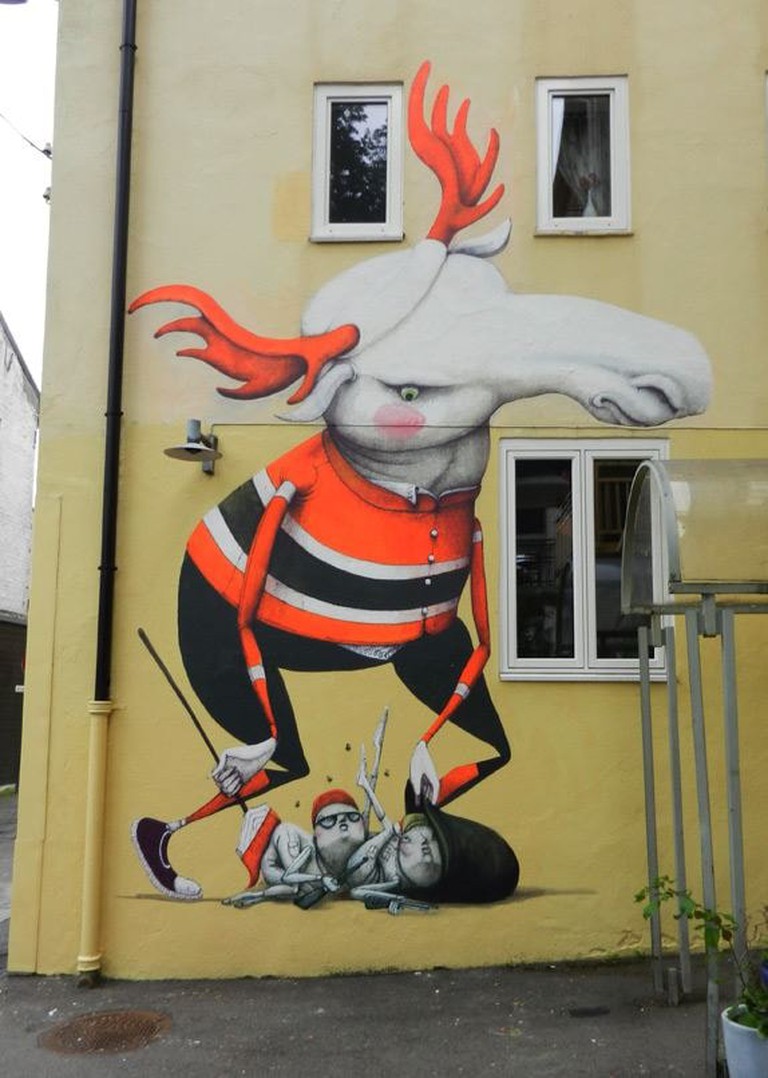 Hama Woods is an Oslo-based stencil artist, whose work demonstrates a reverence for nature and its immediate connection to humanity (think: a lot of cute animals in not very animal-like situations). Her untitled iguana mural can be found on the left bank of the Akerselva river. 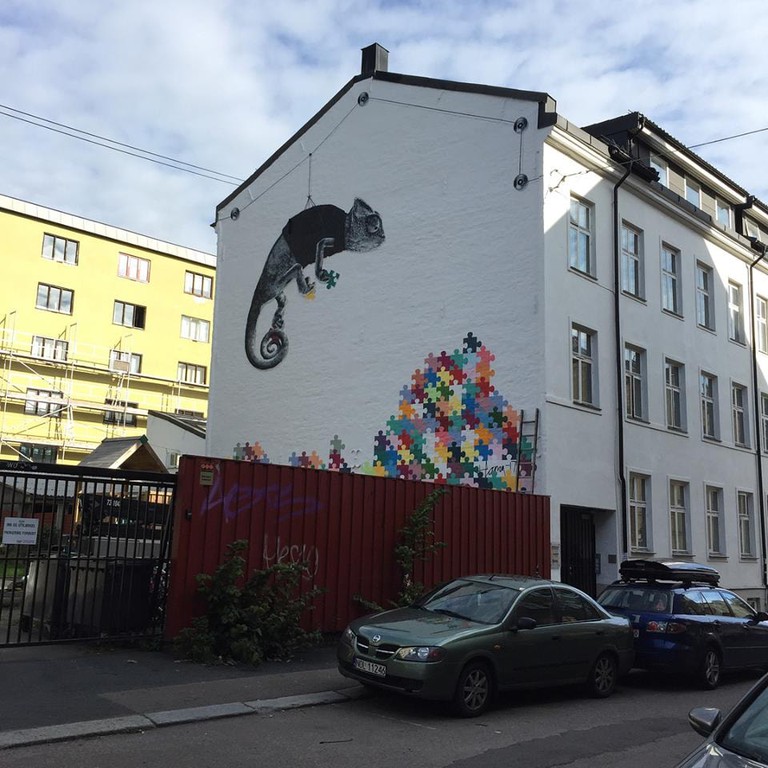 Spanish artist Aryz has graced Oslo with more than one mural (you can see his other work, a mural at Schubelers gate in Tøyen, in the cover photo of this article). He mostly works with muted, pastel colours that are in perfect harmony with the colours of the surrounding neighbourhood. His untitled mural pictured below can be found in Nordbygata, between Tøyen and Grønland. 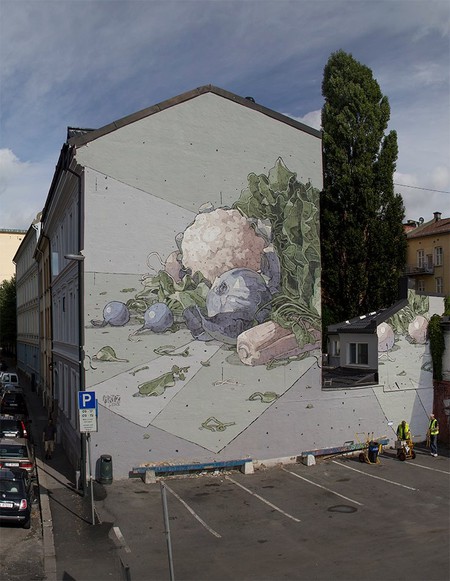 Super A, aka Stephen Thelen, is an artist from the Netherlands who really has a thing for birds – mostly pigeons. His gigantic avians where created in collaboration with Café Amsterdam and you can find them downtown, in Kristian Augusts gate. 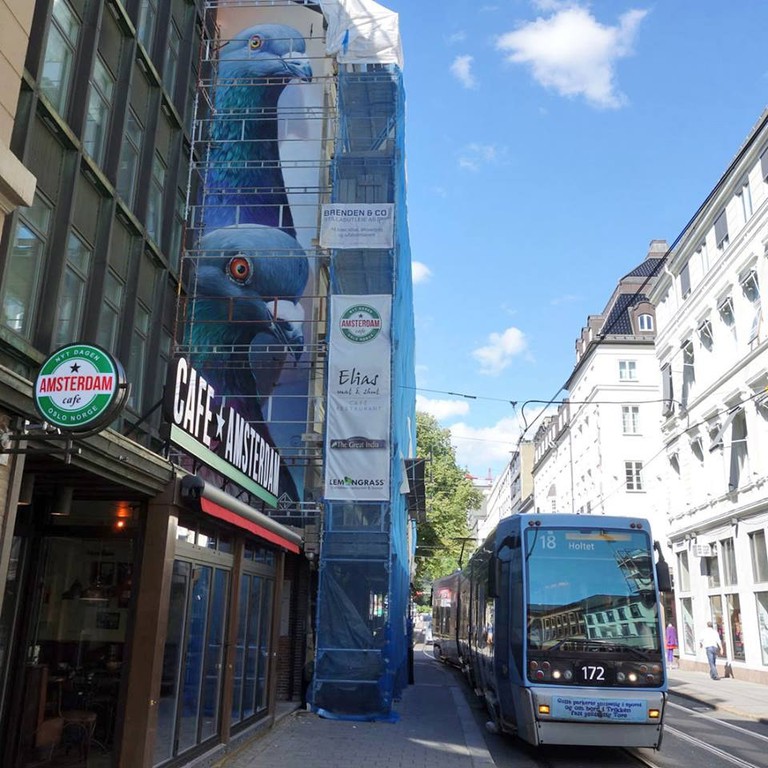 The Melting Spot by Atle Østrem

Atle Østrem is another example of a Norwegian artist whose pieces can be found in many places in Oslo (but also in his hometown of Stavanger). His work The Melting Spot, near the Oslo Central Station, is a perfect example of his loud and colourful style. 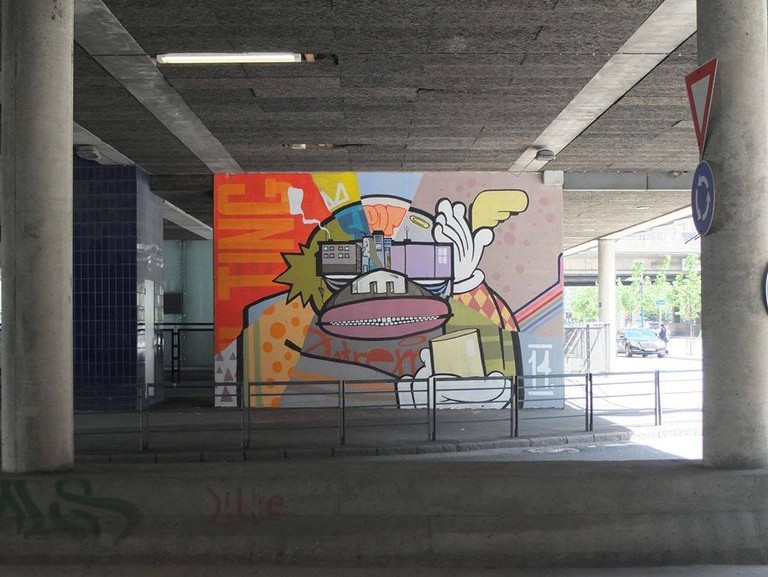 You probably recognise the background of The Scream, Edvard Munch‘s iconic series of paintings. But instead of the emoji-fied screaming figure, you see a sketch of Edvard Munch himself in this mural by artists Steffen Kverneland and Monica Tollness. The eye-grabbing image also graces the cover of Munch, a graphic novel by Steffen Kverneland published by No Comprendo Press, that turns some of the famous painter’s quotes into drawings. You can admire it in Jens Bjelkes gate in Tøyen. 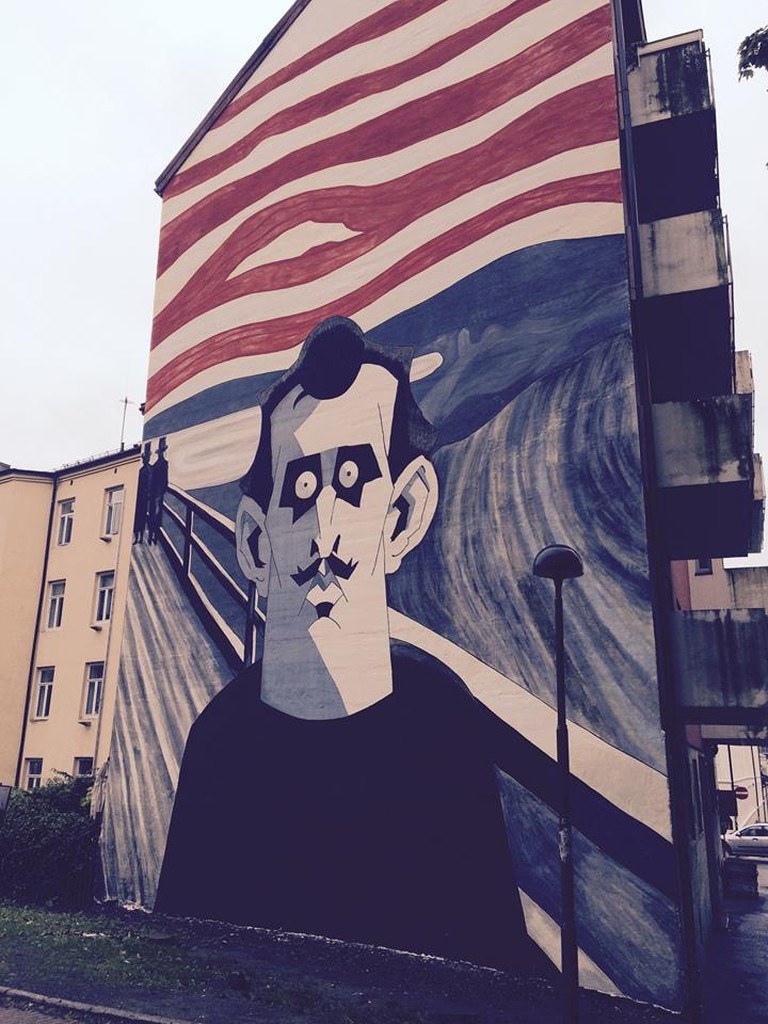 The Last Mohican by Sainer

Sainer is a painter and muralist who lives and works in Poland, but whose murals have adorned walls from Los Angeles and Dubai (as part of the art collective ETAM) to Portugal and Sweden. The Last Mohican, in Oskar Braatens gate in Torshov, is whimsical with a dose of muted melancholia, like most of his work. 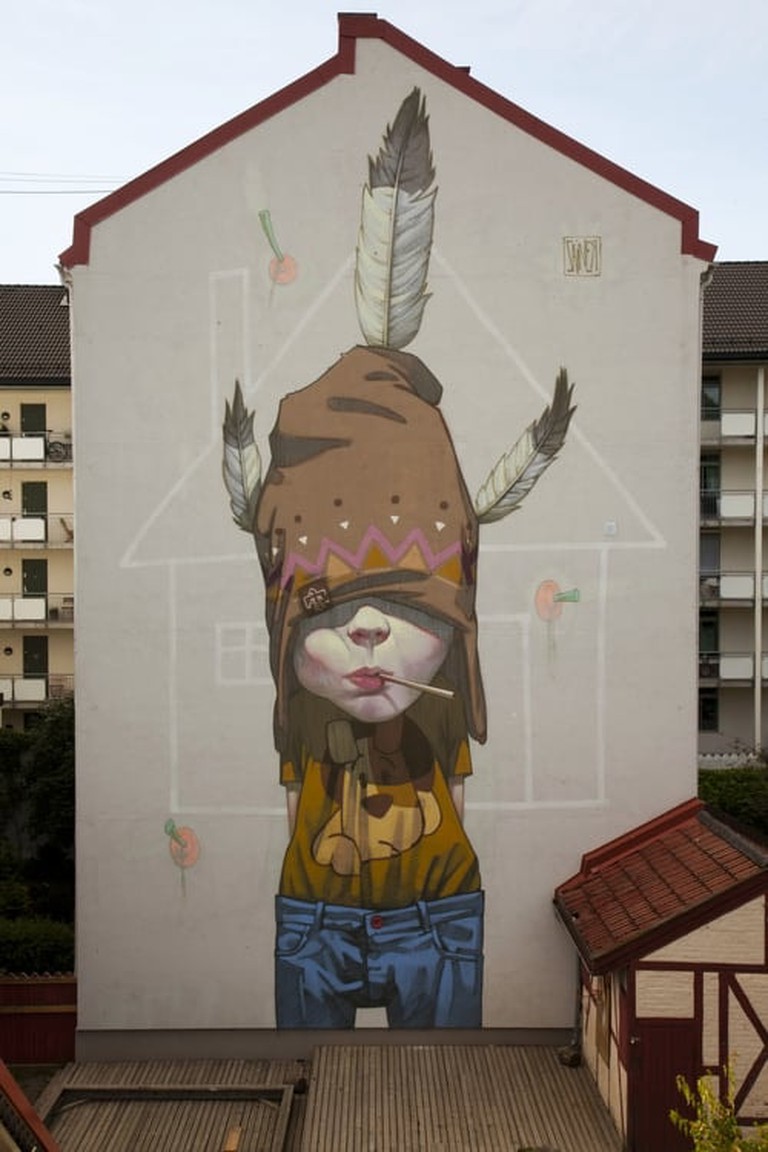 Alice Pasquini’s work explores themes like female solidarity and vitality. The Italian artist has worked for several museums and galleries in Rome, but also for international commercial clients. Her untitled mural in Oslo is vibrant and joyful, and is located just across the river from Blå. 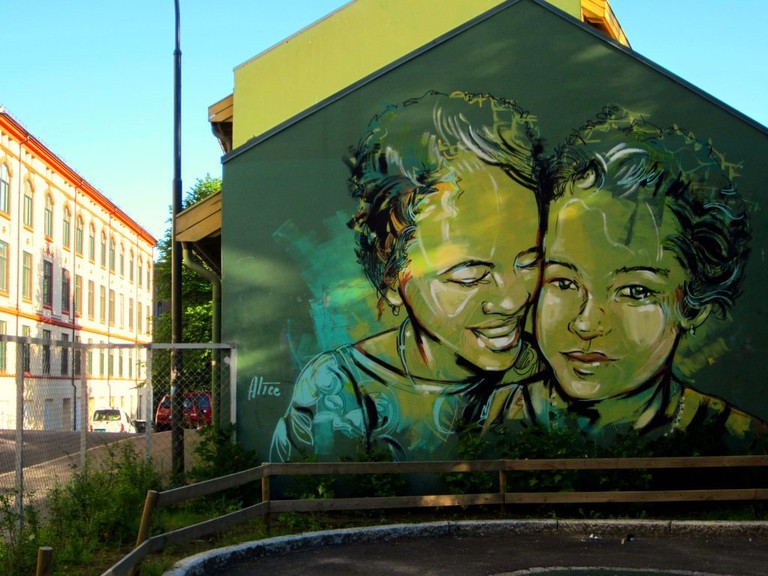 The Grey Wolf by Jussi TwoSeven

Finnish artist Jussi TwoSeven works mostly with a black and white palette (sometimes with accent colours) and his themes depict the wilderness of nature through images of majestic animals. The Grey Wolf, in Gamle Aker, is one of his most recent works – there’s also a roaring bear roaming the streets of Oslo by his hand. 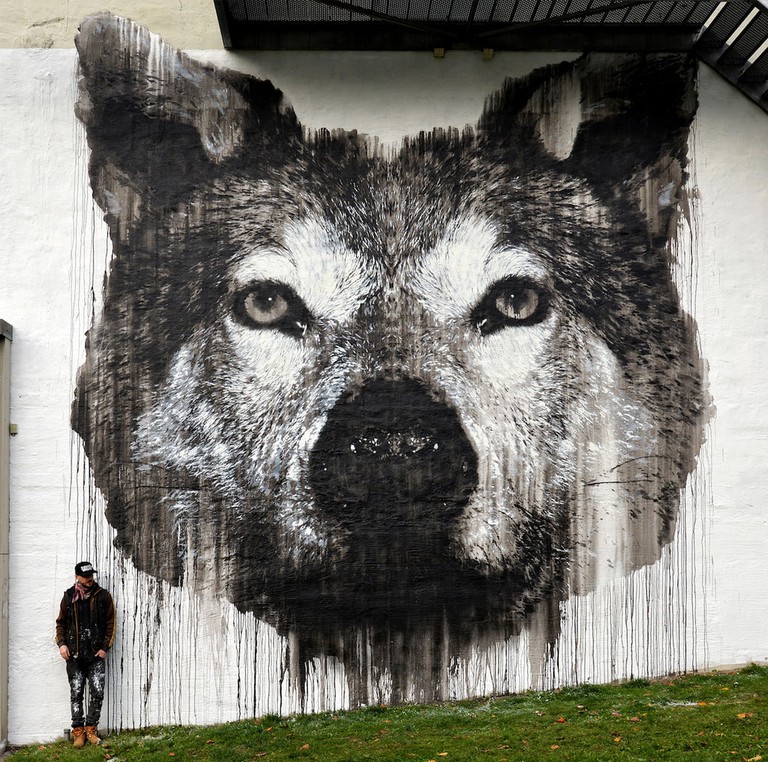 Interested to see more? All of the locations of street art in Oslo are gathered in an interactive map by VisitOslo.