A Millennial's Guide to Grünerløkka 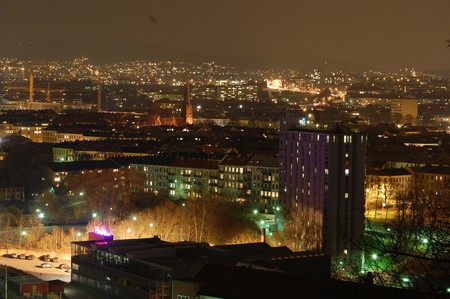 Grünerløkka is one of Oslo’s trendiest districts. An old working-class area, the district became one of the centres of immigration in the 1980s. The fusion of Norwegian and other cultures, different culinary traditions and wares attracted the avant-garde and those with alternative lifestyles, and finally the area’s unique and exciting character brought in the hipsters. All helping to make Grünerløkka what it is today.

You’ll find Grünerløkka just a short walk north of the city centre. Cross the fancy bridge with the four mythical copper animals – or the other normal-looking bridge across the Akerselva river – and one of the first places you’ll notice is the old Schou’s Brewery with its iconic red-bricked building. The brewery was shut down in the 1980s and now houses a restaurant, but you’ll find the cool, dark and slightly secretive Schouskjelleren microbrewery hidden away in the basement of the backyard. Their rooms, or vaults rather, are worth a visit in themselves; and a visit is a great, if somewhat pricey (but let’s face it, we’re in Oslo) introduction to Grünerløkka. 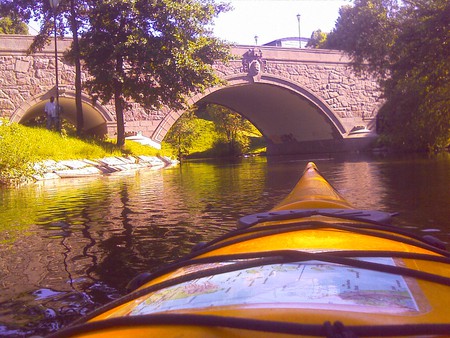 Continue up Thorvald Meyers gate (street) for a good while to get to the heart of Grünerløkka at Olaf Ryes plass (square). On its northern side, you’ll find the iconic Oslo institution Parkteatret; which opened as a cinema in 1907 but is now a popular, intimate bar and concert venue that hosts some of Oslo’s most interesting contemporary artists.

You’ll find many of Grünerløkka’s best bars, cafés and restaurants along Thorvald Meyers gate from Olaf Ryes plass to the Birkelunden park slightly further up the road, including what may be the broadest range of international restaurants and cocktail bars you’ll find within 200 metres of each other in Oslo. If you’re here for a while, it might be worth following Thorvald Meyers gate places like CHAIR, which is currently hosting a series of informal stand-up gigs featuring popular Norwegian comedians for a very decent entrance fee. 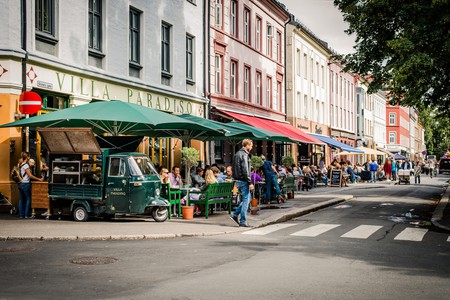 The northern side of Olaf Ryes plass | © Glenn Wedin / Flickr

No guide to Grünerløkka is complete without mention of Blå (pronounced so that it almost rhymes with “more” [/blɔː/] ), a colourful, avant-garde art centre-come-market place-come-music venue-come-night club in an old storage space on the banks of the Akerselva. On market days, you can chat to artists and crafters selling and displaying their treasures and admire the expressive graffiti murals, while Blå becomes one of the city’s most iconic venues at night.

If you’re on the hunt for crafts, unique pieces of art or vintage items, the rest of Grünerløkka will also suit you well. Apart from the markets at Blå, Birkelunden park plays host to a great flea market almost every Sunday where you can pick up some real vintage pieces; and the Velouria Vintage shop as well as many of the shops down Markveien south of Olaf Ryes plass are worth a visit if you’re looking for vintage goods.

Those interested in art will also find some of Oslo’s most interesting smaller art galleries, such as Galleri 69 and Påfuglen. And slightly further up from Blå by the Akerselva you’ll find the lively, modernised Vulkan area; another cool refurbished industrial complex which includes restaurants, hotels and Oslo’s new and popular food hall Mathallen. 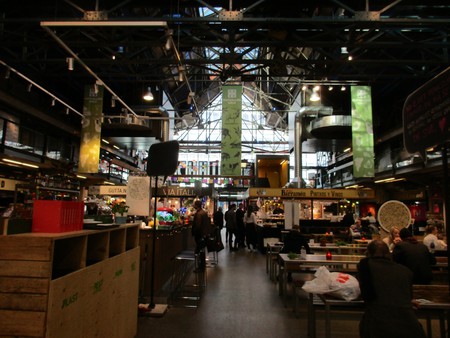 Finally, if you’re looking to save money, a walk along the Akerselva river itself is one of the best ways to get to know the area and enjoy a little of Norway’s striking nature in the very middle of Oslo. Click here for more interesting things to do around Grünerløkka.