7 Best Scenic Routes in Norway You Should Know About 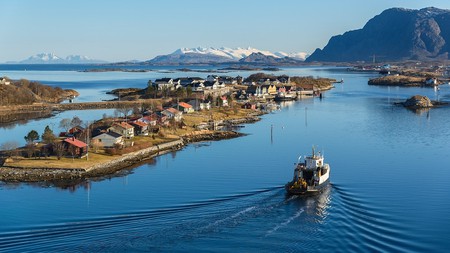 Norway is vast – and vastly beautiful. You could spend years exploring it and still have places left to see. But if you have a bit less free time than that and absolutely have to prioritize, then Norway’s Scenic Routes are perhaps the best way to go. Eighteen routes in total, Norway’s ‘Nasjonale touristveger’ are covering the whole western coast of the country. Below, we chose the most spectacular ones; from Hardangervidda to the south all the way to Andøya in the north. Pick a route, rent a car or a bicycle and make sure to make many stops along the way to take in the views.

The iconic zig-zag road goes by many names: Atlanterhavsvegen, Atlanterhavsveien, Atlantic Ocean Road or simply, Atlantic Road. It runs across Møre og Romsdal county, connecting an archipelago of small islands and skerries with the help of several bridges. Driving on Atlanterhavsvegen brings you closer to the ocean than ever – quite literally as the waves can come on the road during a storm. Feel like walking instead? There are adjacent fishways built specifically for those who prefer exploring on a slow pace, and with a side of fishing. 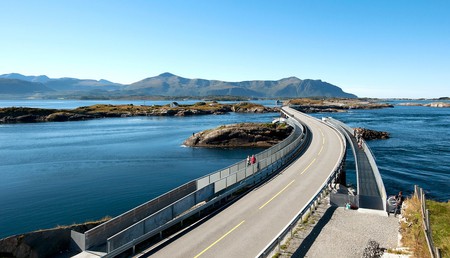 Geirangerfjord is one of Norway’s most famous fjords – and a UNESCO World Heritage site. But it’s not just the fjord that’s worth your time: the whole route along Trollstigen is fascinating. Trollstigen consists of 11 ‘hairpin’ bends that, if you’re not a very experienced driver (with quite a small car), are best enjoyed from afar on one of the viewing points or on foot. Τhe viewing points of Ørnesvingen, Gudbrandsjuvet gorge and Flydalsjuvet gorge provide the perfect spot for you to take in the magnificence of the vistas and snap as many photos as possible. 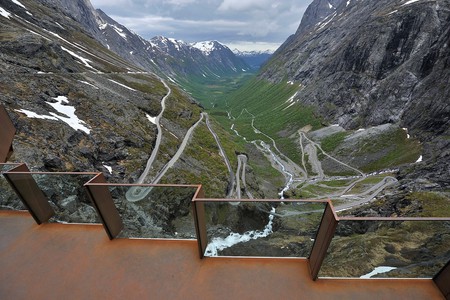 Norway has some stunning beaches – and many of them are on the northern island of Andøya. Driving on this scenic route is certainly easier and less dramatic than Trollstigen, and allows for many leisurely stops along the way. If the weather allows it, you can even swim or kayak at one of the beaches (Bleik is one of the most popular), or look out for eagles, whales and seals. 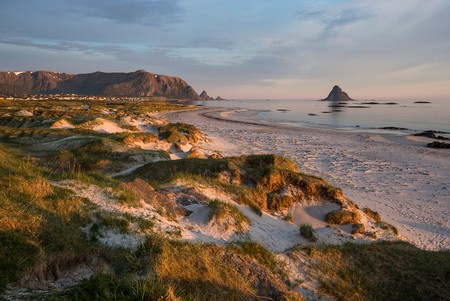 The Midnight Sun on the sandy beach of Bleik, in Andøya | © Roger Ellingsen / Statens vegvesen

On this scenic route you’ll have the chance to cross Northern Europe’s biggest high mountain plateau. Hardangervidda is truly a feast for the eyes, with a diverse landscape that includes glaciers, waterfalls (like Vøringsfossen, Norway’s most famous waterfall), lush valleys with grazing reindeer and untamed mountains. Walk slowly, take nothing but photos. 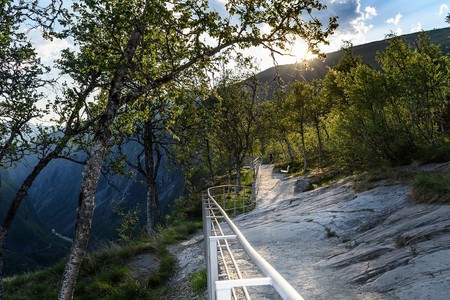 Located in the beautiful Sogn og Fjordane county, the area of Aurlandsfjellet covers offers quite the contrasting experience. On one hand, you have the Stegastein lookout tower, jutting out of the mountain 650 meters above the fjord. On the other, you have Flåm, at the foot of the fjord where the picturesque railway begins its journey. And connecting all that, the scenic route of Aurlandsfjellet is certainly an experience not to be missed. 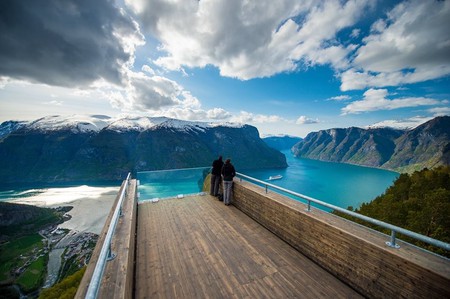 The longest of all scenic routes, you’ll need to make six ferry trips to explore Helgelandskysten in its entirety – but it will be worth it. Along the way, you will also cross the Arctic Circle, encounter the world’s largest tidal maelstrom and see Norway’s second larger glacier. Following the coastal ride, your view will change from mountain peaks and fjords to an archipelago (that’s also a UNESCO World Heritage site) and the sea. 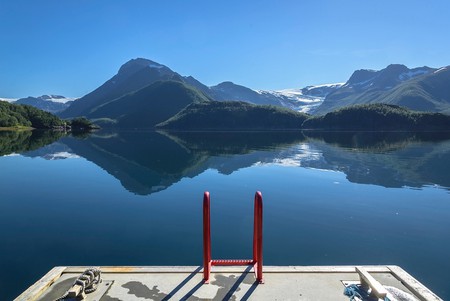 You’re probably not surprised to find the Lofoten islands on any list that has the word ‘scenic’ in the title. Fishing villages, white sandy beaches and jagged mountains await you along this scenic route and the possibilities are endless. How about a wildlife safari? 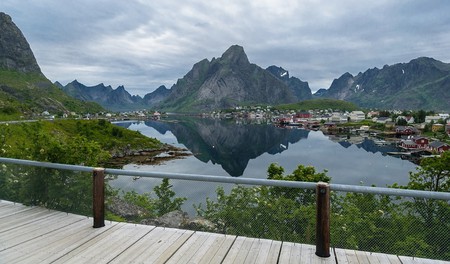