12 Artworks That Capture The Essence Of Norway 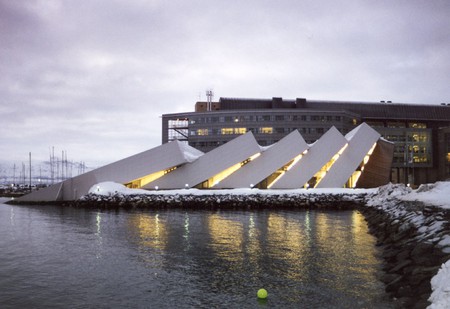 Norway’s wild and stark landscapes have provided inspiration for many artists across the centuries. Below we present some artworks, ranging from the literary to the canvas with some incredible architecture thrown in, which capture both the beauty and harshness of Norway, as well as its rich traditions and culture.

Claude Monet – The House in the Snow

Monet, better known for his paintings of haystacks and lush gardens, spent two wintery months, mainly in Sandvika, an artists’ colony on a fjord. He used the opportunity to experiment with the northern lighting. His work from this time captures snowy landscapes and pastel wintery colors. He attracted the interest of locals as he continued his habit of painting outside, even in the midst of Norway’s harsh winter, painting through snow storms. The House in the Snow is characteristic of Monet’s Norwegian work, with its muted, soft palette. It sums up both the isolation and dreaminess of winter in Norway. 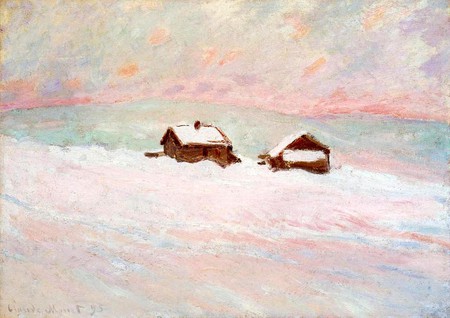 Marianne Heske – Mountains of the Mind

Marianne Heske is a preeminent contemporary Norwegian visual artist. She is best known for her installations and manipulated video landscapes that capture the power of nature and our relationship with it. Mountains of the Mind is an example of a video painting, a unique technique where Heske took still images from videos that she printed onto canvas or silk. The strong vibrant colors of the granite mountains towering over the water evoke the rugged and magical nature of her childhood.

Henrik Ibsen’s Peer Gynt is one of Norway’s most celebrated literary works. The play is loosely based on a Norwegian fairytale, Per Gynt, while some characters are modeled on Ibsen’s own family. The play has been described as a story of a life based on procrastination and avoidance. The script blends surreal fairytale elements with realism and social satire. Although Peer Gynt was initially met with hostility, it is, today, an accepted part of the literary cannon. Each year, Henrik Ibsen and Peer Gynt are celebrated in the Gudbrandsdalen Valley in a cultural festival featuring theatre, concerts and exhibitions.

In 1875, Edvard Grieg, Norway’s most famous son, wrote the score for Norway’s most famous play, Ibsen’s Peer Gynt. The suite extracted from the score, ‘Peer Gynt Suite No.1,’ is his most celebrated work that captured the public’s imagination on its first performance and continues to be regularly performed at concerts. Grieg said he found inspiration for his work in Norway’s traditional way of life, its legends and history. He was an avid student of Norway’s traditional folk music, eventually incorporating fragments in his own pieces.

Reidar Aulie was a politically engaged 20th-century artist whose work captured the struggles of the labor movement and the peace movement. Aulie was most productive during Norway’s occupation during World War II, which he fiercely opposed. His magical lithographs have many meanings. One lithograph seemingly presents a fairytale winter forest. However, the trees resemble women wrapped in evening dresses and furs, with the poor farmer trying to make way through the middle.

Aquarium, Museum
Facebook
Email
Twitter
Pinterest
Copy link
Share
Map View
Polaria is Tromsø‘s museum and aquarium dedicated to all things Arctic. The dramatic design is supposed to represent ice floes being compressed by the sea against land. It actually does look like a series of buildings cascading like dominoes. Inside, you will find an aquarium plus bearded seals, which can be watched cavorting in the water from a transparent tunnel under their pool, as well as an interactive permafrost display and an Arctic storm experience. There are also several exhibitions on Arctic exploration, as well as the potential issues facing Arctic lands and people today, making it the perfect destination for children and adults alike.
Open In Google Maps
12 Hjalmar Johansens gate, Tromsø, Troms og Finnmark, 9296, Norway
+4777750100
Visit Website
Give us feedback

Axel Revold’s post-impressionist paintings highlight Norway’s relationship with the sea and the importance of fishing. His childhood spent in the coastal towns of Alesund and Narvik was a source of inspiration throughout his life. Revold’s paintings of Lofoten in the winter, either battered by storms or with the fishing fleet sailing out among the snowy peaks, are particularly evocative and capture the spirit of the far North. He led Norway’s fresco movement, and his murals adorn many public buildings in Norway, including the National Library in Oslo, the Oslo Public Library.

Edvard Munch is Norway’s most famous artist whose iconic Scream sold for close to USD 120 million a few years ago, making it the most expensive painting ever sold at auction. Starry Night was painted on the beach at Aasgaardstrand in the Oslo Fjord, where Munch spent his summers in the Norwegian tradition. The key feature is the three linden trees which have merged into one mysterious shape and which are still standing today. The painting captures the starry Norwegian sky. It was modeled on Van Gogh’s work with which it shares a title, but Munch’s piece is darker and more brooding. 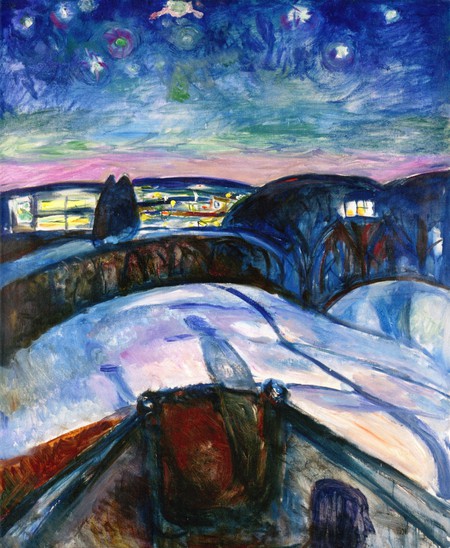 Iver Jaks was a prominent 20th-century Sami Norwegian painter and sculptor. He preferred working with natural materials such as wood, horn, leather and stone for his sculptures and installations. He also illustrated several Sami books and decorated a number of government buildings, including the Sami Museum in Kárášjohka. Jaks’ work focuses on the traditional Sami culture.

The painting below is by one of Norway’s most popular artists, Theodor Severin Kittelsen. It highlights the importance of fairytales in the Norwegian culture. Kittelsen was a 19th-century painter who focused on illustrating mythology, as well as symbolic paintings. The piece below features the mythological creature, the White Bear King Valemon, whose story was first published in the fairytale compilation collected by Asbjornsen and Moe. The tale is similar to The Princess and the Frog. There is a statue of the princess and the bear on Anker Bridge in Oslo. 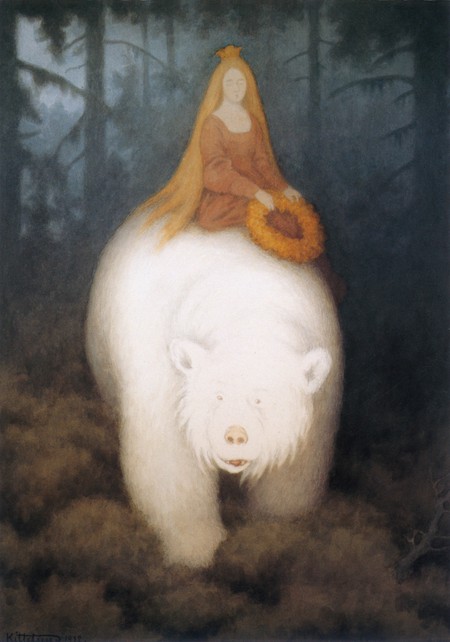 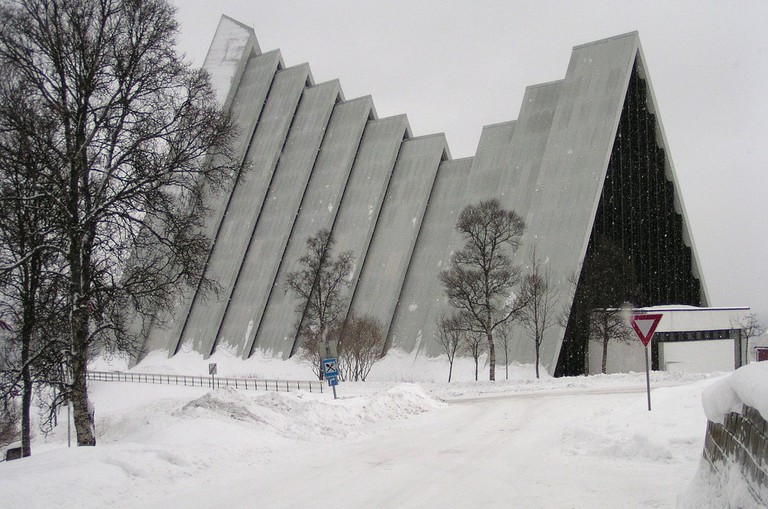 Arctic Cathedral | © Lars Tiede | Flickr
The astonishing triangular wall of Tromsdal Church, better known as the Arctic Cathedral in Tromsø, was designed by Jan Inge Hovig in 1965. The cathedral is visible from the Tromsø Sound, the Tromsø Bridge and when landing in Tromsø. The main entrance is part of an imposing glass façade. Inside, look out for the huge stained-glass window designed by Victor Sparre, which depicts God’s hand with three rays of light: one through Jesus, one through a woman and one through a man.
Open In Google Maps
41 Hans Nilsens vei, Tromsdalen, Troms og Finnmark, 9020, Norway
+4747680668
Visit Website
Give us feedback

Not a work of art in the traditional sense, Svalbard’s Global Seed Vault serves as a global depository for the world’s seeds. The vault is built deep inside a mountain on an island in the Arctic Svalbard archipelago. It symbolizes Norway’s ability to leverage its natural environment, taking advantage of Svalbard’s low tectonic activity and permafrost. The striking modern architecture with the steel, concrete and glass structure jutting out of the mountainside is designed to withstand both natural and man-made disasters. The permafrost and thick rock ensure that the seed samples remain frozen even in the case of power failure, providing ultimate insurance for the world’s food supply.