<a href = "https://www.flickr.com/photos/boscdanjou/13318804784/in/photolist-mhWmDf-4nBGW8-4zW7C8-QHMNP4-2V2uSq-RLRekV-UfxmpN-j4y3Zs-r5hD4t-qMQ4xH-jpMH5h-dCMvbn-m91cmn-r2Znab-r5hEdT-q8uBwV-a8kxtE-2TMZuG-oD5nE1-2THzFe-nQFr7f-vWGEr2-2THyPM-2THyYP-j1MeuW-2TN3h5-2THCxe-peekov-2THBGD-o1a2D9-2X5FoL-MLMH7-2THAD6-92pJ1i-64aAxh-2TMZRj-2TMZgb-fmpawo-2TN1Ny-4zYtiL-2viWjs-r58F3x-UqZbkG-q8h2GW-qfzy3W-r58Ftx-r5hDFR-b5j2Rn-odzsTh-r5hE56"> Paint what you know | © Bosc d'Anjou/Flickr
Bergen was the capital of Norway for centuries and one of the most important cities in northern Europe for even longer; as a result, it is full of interesting history and culture, much of which is uniquely Norwegian. An influential city within the Hanseatic League network and an important point of contact between Europe and the northernmost parts of Scandinavia, here are some of the museums that honor and share this vast history and culture.

Museum
Bergen_2013 06 15_3870 | © Harvey Barrison/Flickr
The Hanseatic Museum at one end of Bergen’s famous Bryggen wharf tells the story of Bergen’s importance within the Hanseatic League and the League’s importance to the city of Bergen. The Hanseatic League was a vast and hugely influential trading network of merchants which spread from Germany as far as the Baltic to the east, Belgium to the south, the British Isles to the west, and the northernmost of Norway.

Active in Bergen for 400 years between the 14th and 18th centuries, it brought great wealth and a large foreign population to the city and also had a huge impact on the city—German has even influenced the local dialect. The museum also includes artifacts from the time and rooms kept as they were during the days of the Hanseatic League, whose members lived and worked in the Bryggen area.
More Info
Open In Google Maps
1A Finnegården, Bergenhus Bergen, Vestland, 5003, Norway
+4753006110
View menu
Visit website
Visit Facebook page
Send an Email
Give us feedback

In 2006, the art and music museums in Bergen combined. Now known collectively as KODE, the five united museums house one of the largest and most varied artistic collections in northern Europe, including a Munch collection to rival the two in Oslo. The KODE art collections are located in four buildings known as KODE 1-4 in central Bergen (easily within reach of one another) and each of the formerly-independent museums is worth visiting for its architecture alone—they make up some of the most beautiful buildings in Bergen. 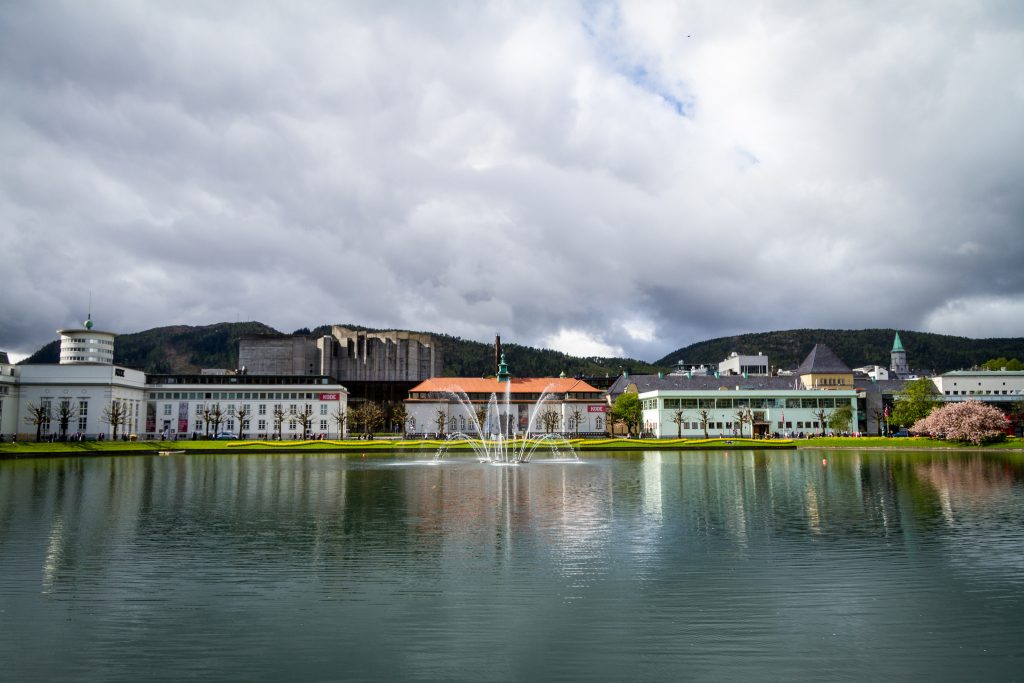 Concert Hall, Museum
0127 | © Howard Lifshitz/Flickr
Bergensian Edvard Grieg spent the last 22 summers of his life at his summer residence Troldhaugen along with his wife, Nina. Their beloved home now make up the Grieg Museum and houses treasures like Grieg’s own Steinway piano that is still occasionally played for concerts. Apart from the house itself, the garden features Grieg’s composer’s cabin, his and Nina’s graves, and an entire modern concert hall which is mostly hidden from view thanks to its ingenious-grass roof. The cabin and concert hall also face the Nordåsvannet Sound, providing a beautiful view of the water.

Troldhaugen is a little out of the way, but all through the summer buses will depart from the tourist information centre at 11 am and return by 2 pm. The round trip costs 250 kroner and includes access to the museum as well as a great 30-minute Grieg concert. The museum is part of the KODE museums, but it has kept some independence.
More Info
Open In Google Maps
65 Troldhaugvegen, Fana Paradis, Vestland, 5232, Norway
+4755922992
View menu
Visit website
Visit Facebook page
Send an Email
Give us feedback

Museum
Leprosy Hospital, Bergen | © Chris Shervey/Flickr
Most people have probably never visited a leprosy museum before. Bergen happens to have an excellent one: the former St Jørgen’s Hospital that dates back to the 15th century, making it one of the oldest hospitals in Scandinavia and one of Europe’s best-preserved lepers’ hospitals. The current buildings date back to the 18th century, but the last two patients passed away in 1946. Norwegian scientists have made great contributions to studies of leprosy including Gerhard Armauer Hansen who discovered the leprosy bacterium in 1873. During his time, Bergen had no less than three leprosy hospitals and the largest concentration of lepers in Europe. The museum tells the story of medicinal discoveries, but also of the social impact of leprosy and the way that these buildings became its own little society within Bergen.
More Info
Open In Google Maps
59 Kong Oscars gate, Sentrum Bergen, Vestland, 5017, Norway
+4748162678
View menu
Visit website
Visit Facebook page
Send an Email
Give us feedback

Museum
Vil vite-senteret i Bergen | © Arild Finne Nybø/Flickr
Expand your knowledge on everything from the climate and environment to the body at VilVite Science Centre. The museum is full of interactive exhibits and lets visitors test theories and experiment. Guests can even try out Europe’s only public G-force ride. This is a great museum for the whole family—particularly on the rainy days to which Bergen is no stranger.
More Info
Open In Google Maps
51 Thormøhlens Gate, Bergenhus Bergen, Vestland, 5006, Norway
+4755594500
View menu
Visit website
Visit Facebook page
Send an Email
Give us feedback

Museum, Building
Street photo from Gamle Bergen Museum, Bergen, Hordaland, Norway | © Jan Frode Haugseth/Wikimedia Commons
Gamle Bergen Museum (“Old Bergen Museum”) is a blast from the past. Explore Bergen as it was 100, 200, and 300 years ago in this open-air museum. In 1800, Bergen was the largest city built of wooden houses in Europe, and 55 of those have been rescued and moved from central Bergen to Elsero since 1945. The houses have been brought back to life with redecorated interiors, some inhabitants, and theatrical performances. Elsero is just north of Bergen, but easily reachable by bus, and the museum includes a nice little restaurant which is open in the summer.
More Info
Open In Google Maps
4 Nyhavnsveien, Bergenhus Bergen, Vestland, 5042, Norway
+4755308034
View menu
Visit website
Visit Facebook page
Send an Email
Give us feedback

Building, Museum, University
Bergen Museum | Bergen Museum
The University Museum of Bergen features two collections: The Natural History Museum and The Cultural History Museum. The Natural History Museum is currently undergoing renovation and will open again in 2019, but The Cultural History Museum is worth a visit for those looking for a historical overview or people with an interest in Vikings, religious or ecclesiastical history, art history, folk art, or Ibsen. The museum entrance can be a little difficult to find, but persevere—it is located in that big, light-greyish building. The entrance fee is only 60 NOK for adults and students and children get in for free.
More Info
Open In Google Maps
10 Haakon Sheteligs plass, Bergenhus Bergen, Vestland, 5007, Norway
+4755580000
View menu
Visit website
Visit Facebook page
Send an Email
Give us feedback

Museum
Der Eingang ins Sjøfartsmuseum/Schifffahrtsmuseum | © Pascal Volk/Flickr
Bergen’s Maritime Museum can be found near the University Museum. Bergen has a close relationship with the sea—sailing and fishing have formed the economic backbone of western Norway and Bergen through its entire existence, and this little museum that first opened in 1927 takes visitors through this history in detail. This is a must for those interested in maritime history, but it can also command laypeople’s attention with such things as its Viking and World War 2 exhibits as well as the friendly and knowledgeable staff who help bring it all to life.
More Info
Open In Google Maps
15 Haakon Sheteligs plass, Bergenhus Bergen, Vestland, 5007, Norway
+4755549600
View menu
Visit website
Visit Facebook page
Send an Email
Give us feedback

Museum
Bergen_2013 06 15_2454 | © Harvey Barrison/Flickr
Staying in the same area, Bergen is also the home of the Norwegian Fisheries Museum. The museum is surprisingly interactive and good fun for the whole family. It relates the history of the fishing industry in Norway, but it does it in a lively way that covers everything from the social impact that recent changes to the industry has had on local families to an investigation of Norway’s exploitation of one of its most important natural resources. A visit should go down swimmingly with all generations. Rowing boats are available for hire from the museum too.
More Info
Open In Google Maps
23 Sjøgaten, Bergenhus Bergen, Vestland, 5035, Norway
+4753006160
View menu
Visit website
Visit Facebook page
Send an Email
Give us feedback

Museum
Bryggen museum | © Peter/Flickr
When parts of Bryggen burnt down in 1955, excavations revealed a huge amount of objects from medieval Bryggen—to date, the Bryggen area has revealed more than 100,000 items from the wharf’s busy past. The oldest houses in Bryggen still standing date back as far as the 1100s, so the area has clearly been inhabited for quite a while. Bryggen Museum takes visitors through medieval Bryggen and features changing exhibitions on Bergensian, Norwegian, and international history as well as the interpretation of history—for example, a current special exhibition looks at history and cultural heritage in relation to Palmyra in the Middle East.
More Info
Open In Google Maps
3 Dreggsallmenningen, Bergenhus Bergen, Vestland, 5003, Norway
+4755308030
View menu
Visit website
Visit Facebook page
Send an Email
Give us feedback

A Bonus Museum and a Note

Museum
In the summer, a secretive museum is open to the public: The Theta Museum may be difficult to track down, but that is the point, really: this free one-room museum with a maximum capacity of 15 visitors at a time served as the headquarters for the Theta Group, who worked to keep up a radio connection between Norway and London during the Nazi occupation of Norway (1940-1945). The room was in use for two years until the Germans discovered and destroyed it in 1942. It was restored in the 1980s with the help of survivors from the resistance group, who were between 18 and 22 at the time. The museum is dependent on volunteers, opens at different times, and part of the museum is only accessible via some steep stairs. Those in the Bryggen area, head to Enhjørningsgården and give it a best shot.
Finally, those planning on visiting more than one museum, check whether a combination ticket may work—several of the museums in Bergen are run by the same organisations (e.g. the Hanseatic, Bryggen, and Fishery Museums), so those hoping to check out multiple museums may be able to pick up a discount.
More Info
Open In Google Maps
2B Bredsgården, Bergenhus Bergen, Vestland, 5003, Norway
+4755552080
View menu
Visit website
Visit Facebook page
Send an Email
Give us feedback
Give us feedback