The Best Restaurants in Bergen, According to a Private Chef 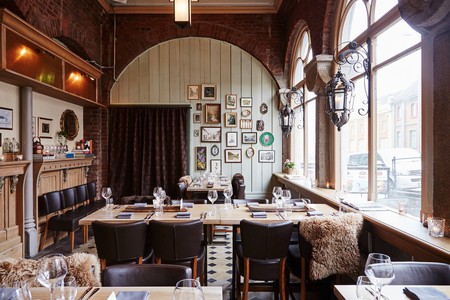 Bergen draws in curious chefs from across the world, thanks to its fresh seafood and foraged ingredients. Anna Davis, a United States-based private chef, spends her summers studying with chefs in the storybook-worthy town. Here, she offers suggestions on where to dine in Bergen.

Private chef Anna Davis has worked at a plethora of Michelin-star restaurants, including Grace, Eleven Madison Park, Blue Hill and Maaemo. But despite the fact that Bergen doesn’t yet have a restaurant with a Michelin star, there’s a reason Davis keeps coming back to the city summer after summer to stage (a culinary term for intern) at Nordic restaurants. “The chefs in Bergen really care about their ingredients,” she says. “They forage and stick to their roots, even in the developing culinary scene, focussing on pure, fresh food and specific flavours. The seafood here is also some of the best in Europe.” Over the past three years, she has staged at Bergen’s Lysverket, Staup and Colonialen 44, and she’s eaten her way through the region along the way. Learn about Anna’s go-to restaurants in Bergen, and others that have been on her dining bucket list.

Surprise your taste buds at Lysverket

At Lysverket, a restaurant located inside Bergen’s KODE 4 museum, chef Christopher Haatuft transforms dishes with simple concepts into memorable meals. Known for its seafood, Lysverket’s menu features outlandish flavour combinations that work together in harmony. For example, the grilled langoustine gets a bitter kick with coffee added to the shellfish sauce. Thanks to creations like this, Haatuft, who has worked at award-winning restaurants around the world, has made a name for himself in the international culinary scene for his savoury sauces, broths and stocks. After finishing your meal, consider walking it off with a stroll through the neighbouring park, which overlooks a lake.

Although it’s about a 20-minute bus ride from Bergen’s city limits, Staup is well worth the trek. “Staup is our favourite restaurant,” says Bergen resident Vera Moberg. “It is such a cosy, friendly restaurant with a calm and peaceful atmosphere.” To get a taste of the variety that the restaurant has to offer, Moberg suggests trying the five-course dinner with wine pairings. Expect to experience a combination of old and new Norwegian and Icelandic food culture with fresh ingredients, some of which might have been foraged from a nearby fjord the day before. Aside from foraging, Staup incorporates pickling in many dishes, another classic Scandinavian food preparation process. The kitchen staff at Staup prep food with care and make everything in-house, including the bread and cured meat.

Eat all the wine and seafood you desire at Colonialen 44

Colonialen, a culinary company based in Bergen, offers elegant four-course meals in a relaxed environment at its formal restaurant, 44. In an effort to embrace seasonality and offer the freshest ingredients, 44’s menu changes throughout the year. The staff at 44 specialise in wine pairings and can guide guests in choosing between several hundred options. The restaurant also offers a selection of Norwegian cheeses, and no matter the season, you can find seafood on the menu. Colonialen also oversees four other culinary destinations, including 44’s casual counterpart, Litteraturhuset. This establishment has more of a café feel, but the rustic atmosphere still invites you to linger for a while.

For a meal with a view, go to Kranen

For an unforgettable dining experience in Bergen, opt to eat at Colonialen’s Kranen, which serves street food located in an old industrial crane. Although the restaurant overlooks the city, it offers a retreat from the hustle and bustle of the centre in the newly developed Solheimsviken district. With glass walls on all sides, you can get a view of the urban landscape as well as the fjords and the seaside. Kranen is a destination for any time of day, and it even offers breakfast staples such as eggs, bacon and coffee.

History and produce-forward flavours at Restaurant 1877 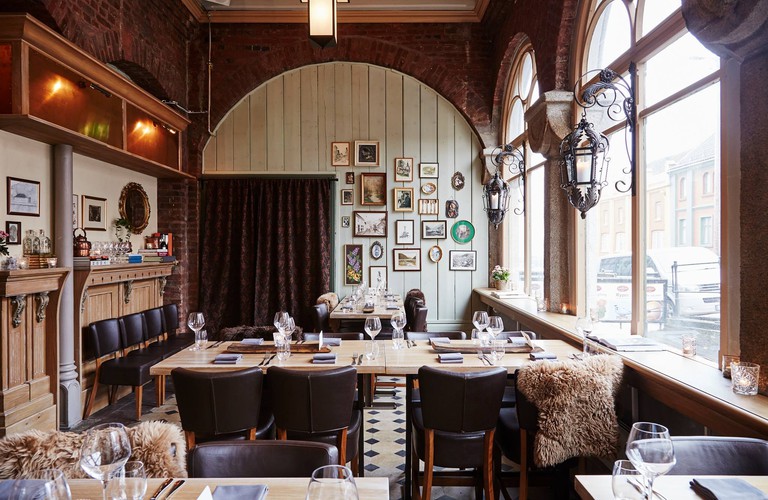 In the heart of Bergen, Restaurant 1877 occupies the same building that the notorious meat market Kjøttbaseren once did, and it’s fittingly named after the year the market opened. As with most Bergen restaurants, 1877’s food varies from season to season. In the spring and summer, dishes feature green sprouts, asparagus, tomatoes, cucumbers, strawberries, catfish and mackerel. The autumn and winter menus include heartier vegetables, seafood and fruit; for example apples, pears, plums, potatoes, root vegetables, lobster and crab. If you’re lucky enough to catch Bergen on a particularly sunny day, you can choose to eat outside on the veranda.

Bacon, pineapple, mushrooms, dill or even hummus – no matter what you prefer on your pizza, Hoggorm has you covered. Even if you’re tempted to go for the build-your-own pizza option, trust the chef’s instincts with the unconventional topping combinations, which include chicken confit, beetroot, balsamic hoisin sauce and fermented cabbage. You can also start your meal off with garlic bread or oysters, but make sure to save room for a third course. For dessert, this pizza joint serves vanilla ice cream with chocolate sauce, strawberry ice cream and chocolate mousse. Hoggorm smokes its meat in-house, and its signature thin crust has just the right amount of crisp. Quench your thirst with a beer, a universally loved companion to anything cheesy and carb-filled.

Tuck into waffles at the quirky BarBarista

Coffee Shop, Coffee, European, Dessert, Cocktails, Beer, $$$
Facebook
Email
Twitter
Pinterest
Copy link
Share
Map View
Fuel up for a day of exploring Bergen with coffee and Norwegian waffles at BarBarista, or choose to end your day here with cocktails or beers. The waffles at BarBarista are folded in half and come with sweet or savoury fillings. Inside this unapologetically colourful café, records line the shelves, while an assortment of umbrellas, paintings and other knick-knacks decorate the ceiling.
Open In Google Maps
12 Øvregaten, Bergenhus Bergen, Vestland, 5003, Norway
+4746940734
Visit Website
Give us feedback

Indulge in the fruits of the sea at Lokalt and Lekkert

When in Norway, a stop at the fish market is on top of most visitors’ lists, and for good reason. Try the saltwater fish at Lokalt & Lekkert, located in Mathallen at the fish market. Here, you can gather inspiration for preparing fish yourself, perhaps in your Bergen accommodation. The sugar-salted cod, which appears on the menu seasonally, gets pressurised for 24 hours before making its way to your plate. In this dish, other ingredients such as almond potatoes, mushy peas, coarse mustard, egg butter and crispy fried bacon merge together to create an interesting combination.

Cruise on over to Cornelius Sjømat Restaurant

Cornelius is located on an idyllic island right outside of Bergen, which means you’ll have to take a boat to arrive in time for your reservation. Although it’s a 25-minute ride from Bergen, the journey is truly an experience, as it offers the chance to soak in views of the fjords. “This restaurant is a destination in itself, and the seafood is excellent,” Moberg says. In fact, you’d be pushed to find fresher seafood, as Cornelius fishes right outside the restaurant.

This article is an updated version of a story originally created by Danai Cristopolou.