The Top 10 Castles And Historical Sites In Montenegro

Montenegro is home to some of the oldest urban settlements on the Adriatic coastline, and, as such, a visit here offers the chance for an exciting exploration into the gripping battles, historic occupations and ancient civilizations of the past. Once home to the Illyrian tribes of the 6th century AD, and having moved through a number of ruling empires including Byzantine and Ottoman, the country boasts a wealth of beguiling sights to experience and discover. Here’s our guide to the 10 best castles and historical landmarks in Europe‘s hidden gem, Montenegro. 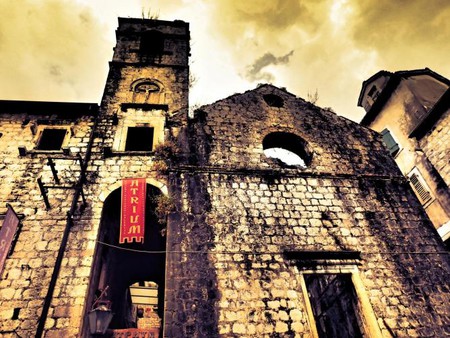 One of the most beautiful coastal towns in Montenegro, Kotor is a secluded historical haven boasting dramatic mountain scenery, mirror-like waters and quaint red-roofed homes dating back thousands of years. First mentioned in documentation in 168 BC, the town’s history is a compelling tale of battles, besiegement and occupation stretching from The First Bulgarian Empire to the Nemanjić dynasty. First fortified by the Byzantine emperor Justinian I, the Kampana Tower and citadel were built to protect the town from potential plunder. Here Kotor visitors can view a number of architectural wonders, including the Venetian walls and fortress and the beautiful Castle of San Giovanni. This tower and fortress were built over one thousand years by its various occupiers, from Byzantine to Venetian, and thus is an architectural mishmash of influences perfect for cultural exploring. The walk to the castle includes a whopping 1350 stairs, but the jaw-dropping views and historical intricacy are worth the trek.

Building
Facebook
Email
Twitter
Pinterest
Copy link
Share
Situated on the Southernmost tip of the city, The Budva Citadel is an impressive site built on the edge of a cliffside, overlooking the golden sands and glittering blue waters of the Adriatic sea. One of the oldest settlements in the Balkans, the citadel was first established in the Middle Ages under the Roman empire. With typical Roman precision and attention to detail, the rustic stone building of the main structure is attached to the rest of the city’s fortifications by an intricate system of stone walls, first designed to provide lookout points for soldiers. In 1455 Budva came under the rule of the Venetian republic, and thus fortifications were again adapted using current architectural techniques, with the intricate stone masonry evident today being a prime example of ancient Venetian design. It switched hands again during the Austro-Hungarian Empire, and the citadel and its bulwarks were updated and rebuilt accordingly. A visit to the citadel is a true glimpse into Montenegro’s past, and brings to light the melange of influences that make the country what it is today.

A member of the royal Petrović family, Petar II Petrović-Njegos was not only a Prince-Bishop educated in Montenegro’s most secluded and celebrated monasteries, but was also a prominent poet and philosopher of his time. A cultural as well as a political leader, Petar II wrote a number of epic poems that have since become national literary treasures, including the cosmic-religious Luča Mikrokozma, in English, The Ray of the Microcosm. The prince died of tuberculosis in 1851, and was originally buried atop Mount Lovćen in a chapel he designed and built himself. After that, his remains were removed from the location twice during both world wars, and the original Mausoleum was destroyed before being rebuilt and reopened in 1974. Today, situated in Lovćen national park, visitors can visit the chapel and learn about this national icon’s complex history whilst enjoying stunning views over the surrounding greenery. 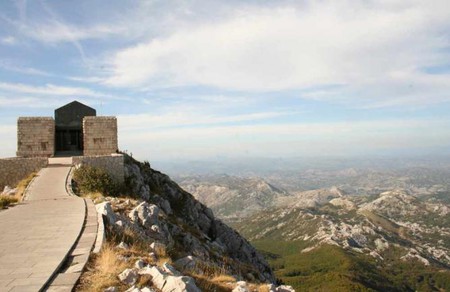 As the old royal capital of Montenegro and the country’s second capital, the town of Cetinje is today the official residence of the President of Montenegro. The town’s royal history began when it was first settled by the Zeta ruler Ivan Crnojević in the 15th century, when he was forced to move his court from Žabljak due to impending Turkish invasion. After the ruler’s move, the city soon became a thriving Zeta metropolis and the country’s religious and economic capital. King Nikolas’ palace is the former residence of Nikolas I Mirkov Petrovich-Nyegosh, a descendant of Ivan Crnojević, and the ruler of Montenegro from 1860-1918, reigning first as sovereign prince and then subsequently as king. As the last Montenegrin ruler before the monarchy was abolished by the Podgorica assembly in 1918, the building is a symbol of a political system of bygone times. Now a fascinating museum where guests can wander round the neoclassical interior and view significant items, including plaques, weapons and coat-of-arms, King Nikolas’ Palace provides a regal day out in one of the country’s most eminent historical cities.

The Royal Palace of King Nikola I, Cetinje, Montenegro.

A feat of architectural excellence, the Ostrog Monastery is one of Montenegro’s most visited tourists attractions, and is a place renowned worldwide for both its man-made and natural beauty. Built almost vertically into the sheer face of the Ostrog cliffs, this Serbian Orthodox monastery was founded in 1773 and was blessed by the bishop Saint Basil upon completion. With its unconventional architecture of slightly uneven stone rooves, and its two churches nestled within caves and painted with historical frescoes, a visit to the Ostrog Monastery is an unforgettable experience. A popular pilgrimage sight with a history of fires, thefts and occupations, the monastery contains relics and riches left behind over the ages which have been carefully preserved to keep history alive. Wander around the monks’ chambers of the upper and lower monasteries and experience the peace and tranquility of a time before technology, before gazing out wistfully at the unbelievable birds-eye views of the surrounding countryside.

In terms of contemporary allure, Ulcinj is known for its unique restaurant and bar scene, as well as being the home of the Southern Soul Festival, an intimate music festival taking place every year on the town’s sandy beachfront. For visitors wishing to explore they city’s interesting heritage as one of the oldest seaports in the Balkans, the best place to start is in Ulcinj Castle, also known as Ulcinj Old Town. This cozy and enclosed area of the city is tucked onto a small peninsula which was previously a fortified village inhabited during the Bronze Age. The ruined castle and surrounding area were once home to a number of civilizations, all of whom have again left their marks on the architecture. Demonstrating rustic examples of Cyclopean stonemasonry in its buildings, walls and citadels, a walk around the Old City is a captivating way to spend a day. Wander down the winding lanes and the narrow alleys to experience Montenegro’s past at its most picturesque. 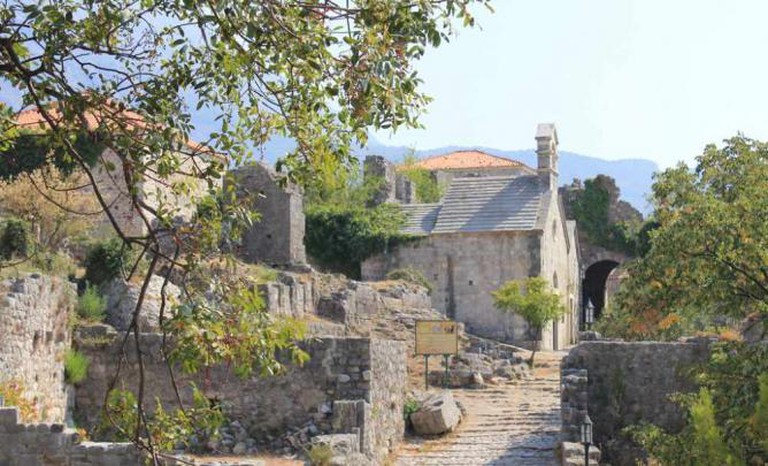 Stari Bar Village | © Raymond_Zoller/Flickr
This tiny town has experienced unbelievable amounts of drama and action, having been inhabited since the early Middle Ages and once ruled by the Byzantines, the Nemanjić dynasty, Louis I of Hungary and the Ottomans. Its ruined fortress is one of the most visually alluring sites that Montenegro has to offer, with the proud stone tower rising up against the striking backdrop of Mount Rumija. If its political turbulence wasn’t enough, Stari Bar was in 1877 the scene of a dramatic bombardment in which the Montenegrin army struggled to recover the town from its Ottoman occupiers, a challenge they eventually succeeded in after seven weeks in battle. Consequently much of the town was destroyed, with only its fortress settlement remaining. These poignant ruins, as well as the scarcely populated surrounding town, are available for exploration, and there are a few traditional cafes and restaurants nearby to fuel the historic adventures of visitors.

Our Lady of the Rocks 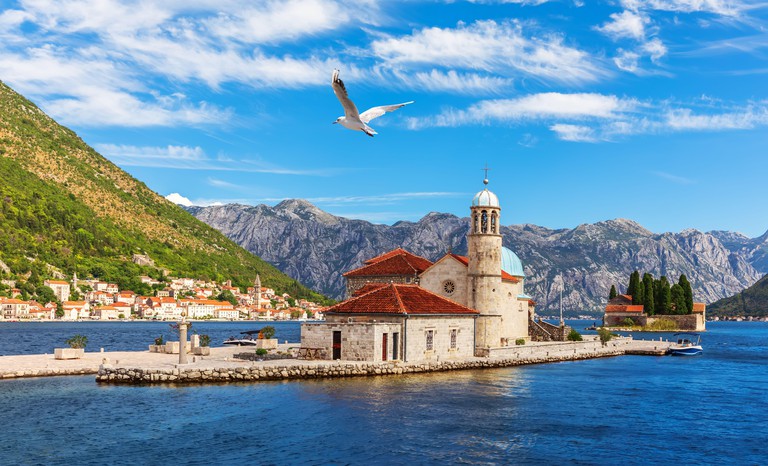 Church of Our Lady of the Rocks and Island of Saint George | © Anton Aleksenko / Alamy Stock Photo
Located on a manmade islet on the beautiful Bay of Kotor, Our Lady of the Rocks church is a picturesque sight to behold, surrounded by mountains and the sea. Though its exact history isn’t well documented, local legend has it that somewhere between the 14th and the 17th centuries a shipwreck caused a group of local fishermen to find an icon of the Virgin Mary with Child perched on a sea rock. Taking it as divine intervention, the fishermen pledged that every time they returned from a successful voyage they would add a rock to the island. Thus a tiny islet gradually took form, and eventually a small church was built upon it. Accessible only by boat, the church is today one of the country’s most whimsical and magical destinations where visitors can enjoy its magnificent interior and the small museum beside it. The church contains a number of artifacts including a finely ornamented marble alter, beautiful local embroidery work and paintings by the Venetian painter Tripo Kokolja.

The Cathedral of Saint Tryphon

Building, Cathedral, Church
Facebook
Email
Twitter
Pinterest
Copy link
Share
Another of Kotor’s historic gems is the Cathedral of Saint Tryphon, a Roman Catholic church first consecrated in 1166. Damaged in a fatal earthquake in 1667 and reconstructed only to experience another earthquake in 1997, this romantic cathedral tells a compelling story of human endeavor and perseverance in times of hardship. Constructed in the name of Saint Typhon, the third century Christian martyr said to be the patron saint of the city, the building is designed in a mostly Romanesque style, with two Baroque bell towers added after the first earthquake. Step inside to view the wonderfully restored stone columns of the original church as well an intricate 12th century silver alter, and visitors can view a number of historic icons and artworks dating back to the church’s foundation, telling the story of its journey through time.

Those with an interest in abandoned buildings will be captivated by the Mamula Fortress and its dark past. Located on the tiny, uninhabited island of Lastavica, just off the coast of Marista, the fortress was constructed by the Austrian Admiral Lazar Mamula in 1853 in order to protect against invading ships. Due to its secluded location surrounded by sea water, the fortress was used as a prison and concentration camp during World War II by Benito Mussolini’s fascist army. With over 2000 prisoners, the camp was packed full of men, woman and children from regions such as Dalmatia and Boka, said to be enemies of the Italian occupying forces. Accessible by rowing boat, kayak or by swimming, the island makes for a dark day of exploration and is a fascinating part of Montenegro’s recent history. During the summer months there are various guided tours to the island run from the nearby town of Luštica, or from Prevlaka in Croatia.