The Top 10 Beautiful Towns In Montenegro

With its name literally meaning Black Mountain, Montenegro is by definition a dramatic mountainous area bordering the Adriatic sea. Here’s our guide to the 10 most beautiful towns in Montenegro. 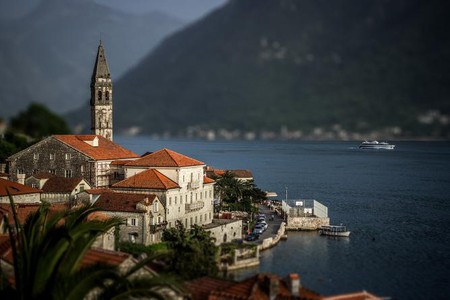 With a history dating back to the 15th century, the islet of Sveti Stefan is not only one of Montenegro’s most stunning and iconic sights, but is also a destination soaked in culture. Situated on the Budva Riveria, it has tranquil pebbled beaches and glittering blue waters. This former fishing village was first inhabited in 1442 when a wall was built around the island to protect locals from a Turkish invasion. The island is now home to the luxury holiday resort Aman Sveti Stefan, which has hosted stars from Claudia Schiffer to Marilyn Monroe. The islet is connected to the mainland by a causeway of private beach, so visitors to Sveti Stefan can wander along and enjoy the island’s four small churches. Or, they can simply relax on the public beach across the causeway, a great way to enjoy spectacular views over this bewitching town.

The southernmost town in Montenegro, Ulcinj is a dynamic coastal town with a diverse heritage and warm atmosphere which will delight all culture seekers. Due to its proximity to Albania, the town is home to a large Muslim population. Thus, it enjoys a culture oozing with Middle Eastern influence, from its authentic Arabic restaurants to its numerous beautiful mosques. For those wishing to explore this ancient seaport and not simply snooze the day away on its glorious sandy beaches, Ulcinj is a hub for historic architecture. Having existed under Roman, Byzantine, Venetian and Ottoman rules, the town is a melting pot for building styles and ancient ruins. The Museum of Local History is a sensible place to start in order to begin tracing the town’s colorful history. The town has many fascinating cultural dimensions and the area is one of the most aesthetically pleasing in Montenegro.

Lying off the beaten tourist path, Rose is a cozy fishing hamlet with a picturesque port. It manages to convey a true sense of serene solitude and tranquility. Rose’s quiet coves, sandy beaches and calm lookout points allow visitors to experience Montenegro’s natural allure without the hustle and bustle of the larger towns. It also gives guests the chance to see real Montenegrin village life. Wander through the old town to see quaint little streets and ancient buildings. One of these old buildings is what used to be Rose’s medieval fortress but is now a restaurant revered among locals. Set right on the coast, this scenic town is also a great place to taste fresh, locally caught seafood. Some of the best mussels the region has to offer are served in its array of endearing and romantic restaurants. Rose is also a popular diving spot, with various underwater wrecks and an abundance of marine life waiting to be discovered.

Tivat is a resoundingly pretty town at the foot of Mount Vrmac, and is a popular spot for hikers and mountaineers. With its peaceful coastline lined with palm trees, Tivat comes alive in the summer when many people flock from inland to enjoy the sun-drenched weather and summery feel. With its own stretch of unspoiled sandy beach, Tivat is a Montenegrin paradise, perfect for topping up a tan while taking in the blissful mountainous surroundings. Visitors can take a stroll in the evening to watch a memorable sunset over the water, or to look at the yachts that crowd the town’s port during the summer months. Water-sports fans can enjoy the wonderful selection offered here. There’s everything from kayaking to wake boarding and trimaran sailing. A number of first-class restaurants and luxury hotels can be found in town and a stay in Tivat promises to be fun-filled, entertaining and mercifully relaxing.

A charming coastal town, Kotor has dramatic sea and mountain scenery for its visitors to marvel at. There’s also a tranquil bay hugged by the limestone cliffs of Lovćen and Orjen. As a UNESCO world heritage site, the region of Kotor promises to provide unforgettable views as well as an enthralling history and culture. First conquered by the Greeks around the fourth-seventh century BC, the town was once a fortified village surrounded by walls of up to 20 meters. This was to protect the Byzantine emperor Justinian the Great. Through the ages the town has been under Venetian, Ottoman and Napoleonic rule. Today, visitors can wander through quaint narrow streets and alleyways and visit its main square, the Piazza of the Arms, as well as the nearby gate to the city. Kotor is also home to rustic restaurants and bars, establishments serving traditional Montenegrin fare as well as international dishes.

Across the bay from Rose lies Savina, a tiny town surrounded by lush green forests and mountains. It is on one of the most beautiful parts of Montenegro’s coastline. This quiet village is home to the radiant and compelling Savina monastery, a Serbian orthodox monastery dating back to the 15th century. Overlooking the tranquil blue waters of the Bay of Kotor as well as dramatic mountainsides topped with snow, Savina is home to some of the most stunning scenery in the Balkans. It is a peaceful and beautiful place to spend a day. For wine lovers, Savina is also home to the dreamy Castel Savina Vineyard, where guests can sit in peaceful landscaped gardens overlooking the water. There they can sample a variety of tasty vintages, from their elegant cabernet sauvignon to their refreshing rose-grenache.

Budya is situated on the Adriatic coastline with a flawless stretch of sandy beach overlooking the water. This makes it an ideal location for sun-seekers looking to spend a few hours reclining and enjoying the mild Montenegrin weather. For history lovers, Budva is also home to an ancient old city which has been remarkably well-preserved since the Middle Ages. Historical sources date the town back to the fifth century BC which allows visitors to enjoy a plethora of ancient churches and stone buildings. There are also winding cobbled lanes which lead to the town’s wonderful restaurants, cafes, shops and attractions, including its renowned Maritime museum. With its typical Montenegrin red-roofed buildings and stone walls, Budva is a picture-perfect place in which to spend a day exploring. For those looking for a more lively Montenegrin experience, come during the summer months. This is when Budva plays host to the Sea Dance Festival, an exciting international music festival taking place on Jaz Beach.

Built in the Baroque style during the 17th and 18th centuries, this handsome stone village is the product of 200 years of Venetian rule. Because of this, its infrastructure and architecture emulates that of the historic Italian city. During this era security was of maximum importance to its people, and one of the major components adding to the town’s charm and historical significance is its watchtowers. There are 10 of these placed at strategic points throughout the area. Home to 14 Catholic churches and a number of Baroque palaces, Perast is a testament to bygone religious times. It is also a favored destination for modern art historians who come to chronicle the town’s past and enjoy its remarkable atmosphere. Those wishing to enjoy some natural beauty will not be disappointed in Perast. Its quay stretches out over the sea, and is again surrounded by striking mountain scenery.

At the foot of the Prokletije mountain range in a peaceful valley, this town lies on Lake Plav, a glacial lake which is one of the largest in the region. Hikers, climbers and wild campers will have a lot to do here. The surrounding greenery, countryside and mountains make for an excellent day of exploring and reveling in the jaw-dropping natural beauty and serenity of the land. The town of Plav was named after the Roman emperor Flavius. Like Perast, it is famed for its 17th-century watchtowers, as well as its many monasteries, churches and mosques. Another of Plav’s attractions is its numerous karst wells, created by the dissolution of its native soluble rocks. This action formed interesting caves and sinkholes as well as natural springs.

Situated just at the entrance to the Bay of Kotor, Herceg Novi is a large town popular among yachters and sailors. An area with karst wells, this place lets visitors enjoy the once-in-a-lifetime experience of swimming in Herceg Novi’s Blue Grotto. This grotto is a mountainside cave whose natural light makes the seawater look a deep, almost luminous blue. Founded in the 14th century by the Bosnian king Stjepan Tvrtko, this is a Montenegrin town with a riveting past. Significant modern historical events occurred here. These events include the annexation by Italian forces in World War II, and later its recapture by the former Yugoslavia’s National Liberation army in 1943. Today, Herceg Novi is a thriving tourist destination featuring such notable buildings as its historic Mamula Fortress and the ancient clock tower. It is also famous for its citadel, which was erected in 1702 and offers panoramic views over the town and coast. With walking tours on offer as well as a diverse selection of bars and restaurants to visit, Herceg Novi is a wonderful place in which to experience life in Montenegro.