The 10 Most Beautiful Buildings in Montenegro 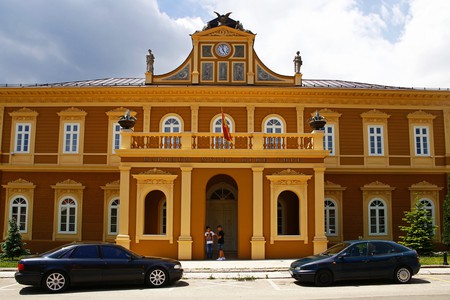 In a country that’s often found itself razed by war, where many cities have been dominated by Brutalist architecture, Montenegro isn’t known for its beautiful buildings. But a closer look reveals a rich past where Europe’s best architects designed magnificent residences for Montenegro’s leading figures. Here are the 10 most beautiful buildings in Montenegro. 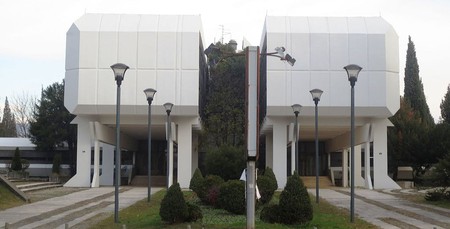 ‘Bokelj’ seafarers, as sailors from the Bay of Kotor were known, risked life and limb at sea, but the spoils for the successful were grand. Tripkovic Palace near Kotor is a prime example of the grandeur and luxury that abounded in the bay. The baroque palace was built from Korcula stone from Croatia at the end of the 18th century by Captain Andrija Jozo Tripkovic. The palace covers four floors and has sprawling, terraced gardens. Inside there are seven bedrooms, and, for the right price, the palace is looking for a new owner. 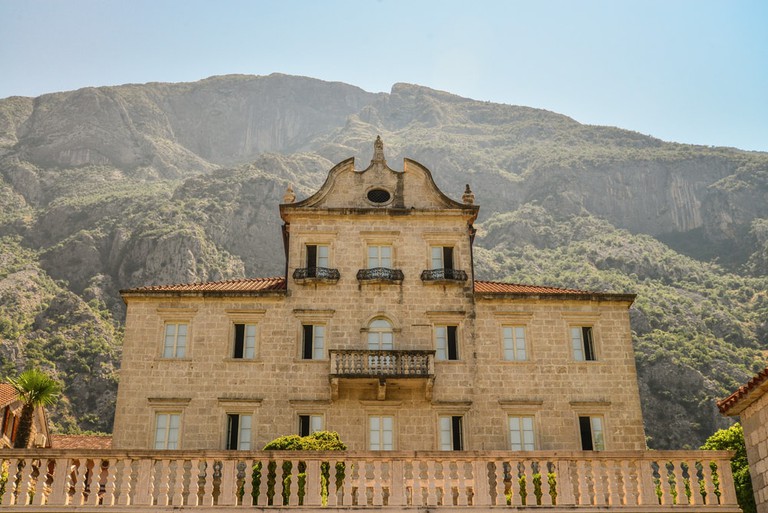 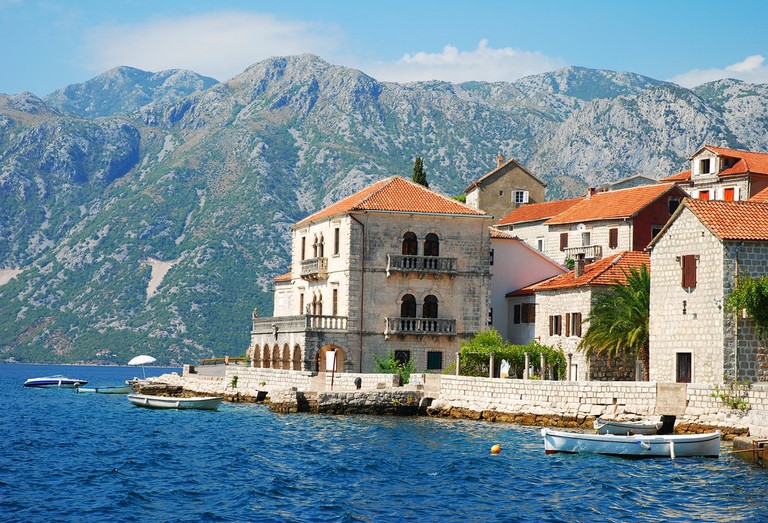 Bujovic Palace | © Roderick Elme/Flickr
Bujovic Palace, now Perast Museum, is one of the most beautiful baroque palaces in the Bay of Kotor. It was built in 1694 and designed by Venetian architect Giovanni Battista Fontana. The palace was a gift to Vicko Bujovic from the Republic of Venice as thanks for his help repelling the Ottoman Empire during the Morean war in 1687. The palace’s stand-out feature is the large balcony with its proud lions standing guard at each end. These make for a fantastic photo when standing on the balcony overlooking the bay.
Open In Google Maps
Perast, Kotor Municipality, Serbia And Montenegro
Visit Website
Give us feedback

Our Lady of the Rocks 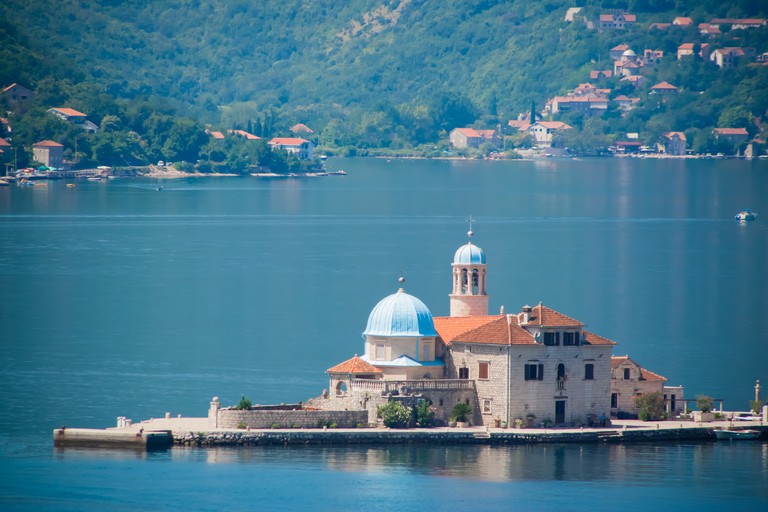 Our Lady of the Rocks | © Andrea de Poda/Flickr
Just offshore from Perast, Our Lady of the Rocks is a Roman-Catholic church on a man-made island. Legend has it that two brothers found a painting of the Madonna and child on a rock on July 22, 1452, and decided to build a church there. The current church was built in 1722 and has two distinctive blue domes; the original Orthodox church building is noticeably older and is now a museum. The island was built by throwing rocks and scuttling ships, and at sunset on July 22 of every year, a flotilla of locals row out to throw rocks around the island in an event called Fascinada.
Open In Google Maps
Serbia And Montenegro
Give us feedback 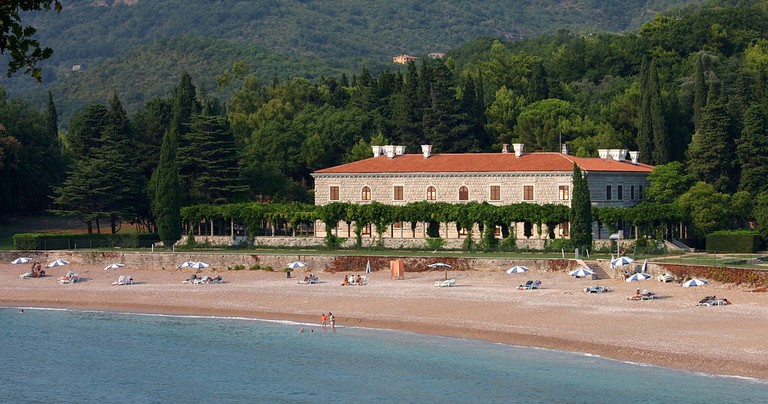 Villa Milocer | © Pear Blossom/WikiCommons
It’s hard to imagine a more idyllic place than Villa Milocer. The villa was built in 1934 as the summer residence of Queen Marija Karadjordjevic and is backed by a large forest of olive trees, cedars and pines called Milocer Forest Park. But it’s the front of the villa that makes it so spectacular. In spring, the terrace is shaded by a canopy of bright purple wisteria that overlooks the shore of a perfect bay of crystal-clear, azure water, aptly called Queen’s Beach. Today, Villa Milocer is part of Aman Sveti Stefan, a luxurious resort.
Open In Google Maps
Sveti Stefan, Budva Municipality, 85315, Serbia And Montenegro
+38233420000
Visit Website
Give us feedback

Vladin Dom was originally built for the Montenegrin parliament in 1910, when Cetinje was the capital of Montenegro. The neo-baroque building was designed by a well-known Italian architect of the time called Corradini, who also designed the former Italian and Russian embassies in Cetinje. Today Vladin Dom houses the historical, art and archaeological collections of the National Museum of Montenegro and is a must-see in Cetinje. 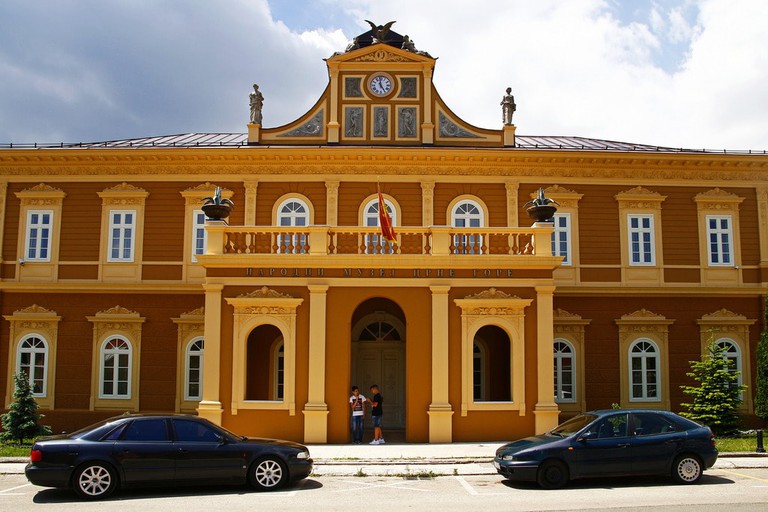 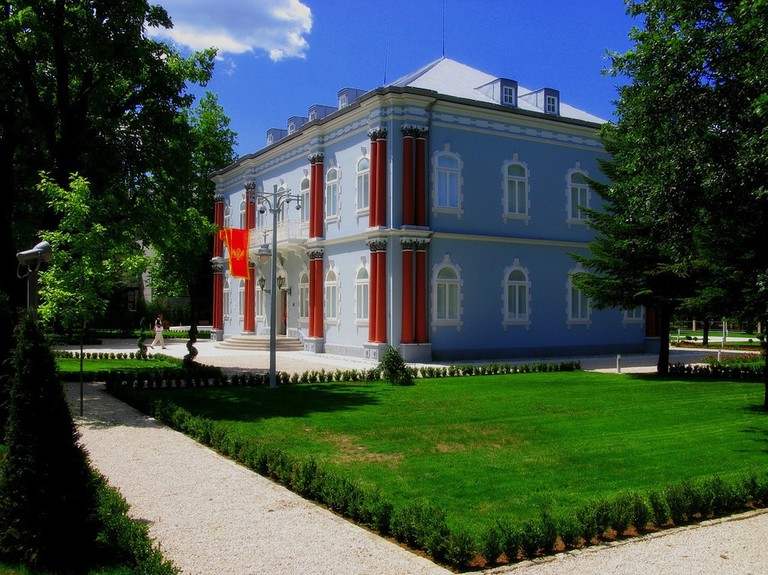 The Blue Palace | © 12019/Pixabay
Also in Cetinje, the Blue Palace was built in 1896 for the heir to the throne, Prince Danilo Petrovic, who lived there until 1916. The palace has also been used as a school, art gallery and museum. Today it’s the official residence of the president of Montenegro. There are always two guards standing at the palace entrance, but the locals say that if you sneak up and run past the gate quick enough, you’ll catch them playing cards!
Open In Google Maps
Plavi Dvorac Njegoševa, Cetinje, Prijestonica Cetinje, Serbia And Montenegro
Give us feedback 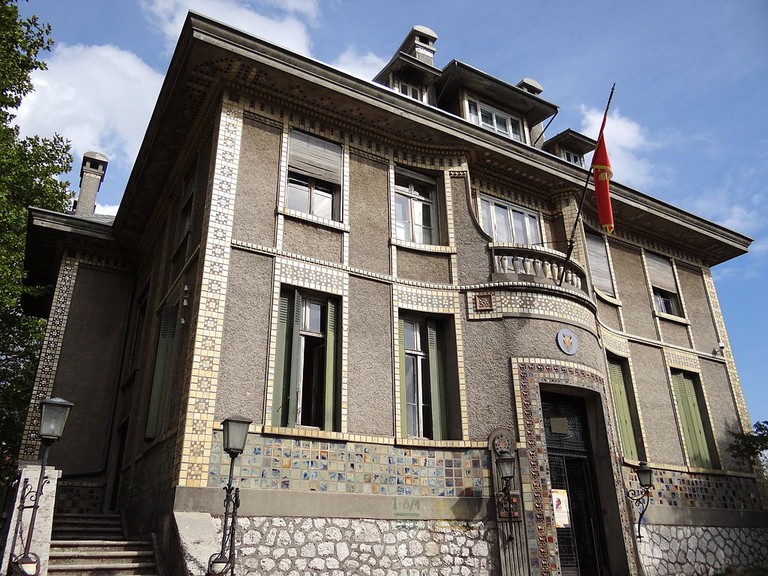 French Embassy Cetinje | © Adam Jones, Ph.D./WikiCommons
As the former capital, Cetinje is home to some of the most beautiful and culturally representative buildings in Montenegro. The former French Embassy is one of most interesting. The unofficial story is that this playful building was supposed to be the French Embassy in Egypt, but the plans mistakenly ended up in Montenegro, and that’s where it was built. Despite being somewhat rundown today, with its bright, multi-coloured tiles and lemon-yellow trim, it’s easy to imagine what a fashionable building it was in its heyday.
Open In Google Maps
Njegoševa, Cetinje, Prijestonica Cetinje, Serbia And Montenegro
+38241230250
Visit Website
Give us feedback 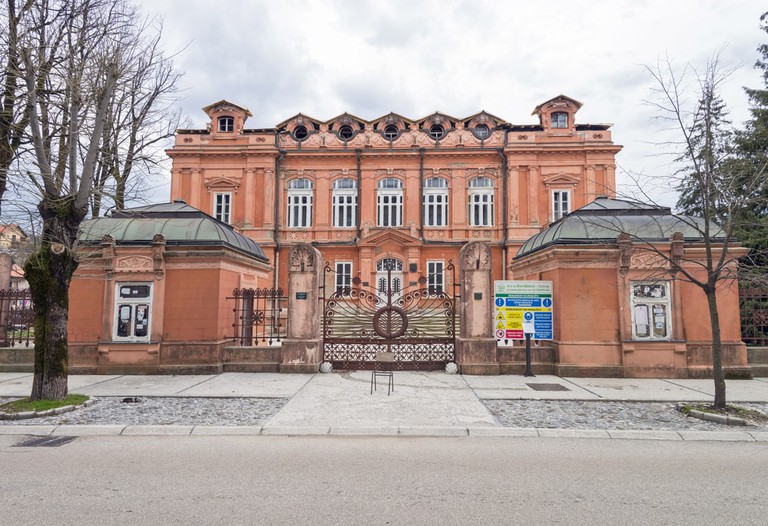 Former Russian Embassy | © Gennadiy Solovyev/Shutterstock.com
Not to be outdone, the Russian Embassy in Cetinje exudes the might of Russia. Two guard houses, either side of an intricate, peacock-patterned gate make an imposing entrance that leads up to the three storied building. The building was designed by the Italian architect Corradini, who also designed the parliamentary building and Italian embassy. It served as an embassy for only 15 years, and today it houses the Montenegro School of Fine Art.
Open In Google Maps
Rusko poslanstvo Vojvode Batrića, Cetinje, Prijestonica Cetinje, Serbia And Montenegro
Give us feedback 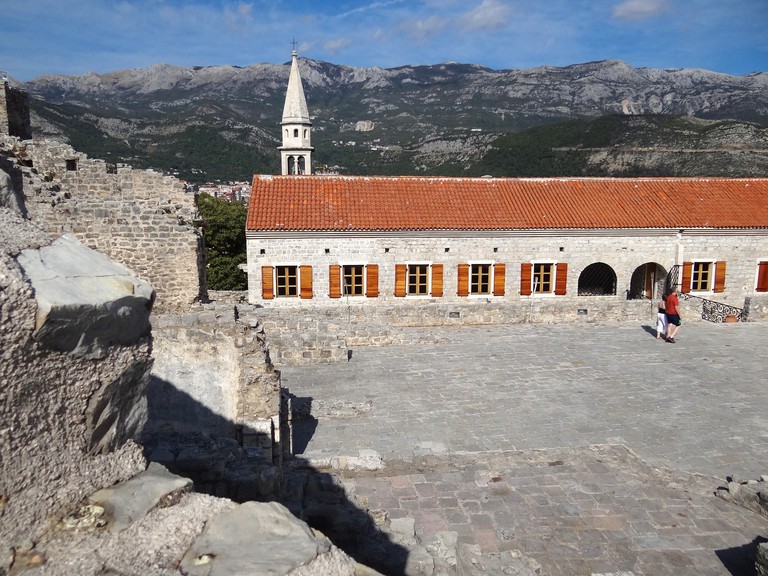 Budva Citadel | © Adam Jones/Flickr
Budva Citadel has gone through many reincarnations over the years. Originally built in the 9th century, it was a castle complex called Castle of St Mary. Built along the seaside of the town, the castle was adapted through various reigns to become more of a fortress to protect from invasion and also to allow a retreat by sea if needed. It got its current look in 1936, when the Citadel was used by the Austrian army as barracks and munitions storage. Today, the Citadel is a beautiful part of Budva old town where visitors can explore the citadel and enjoy the views.
Open In Google Maps
Budva, Budva Municipality, Serbia And Montenegro
Visit Website
Give us feedback 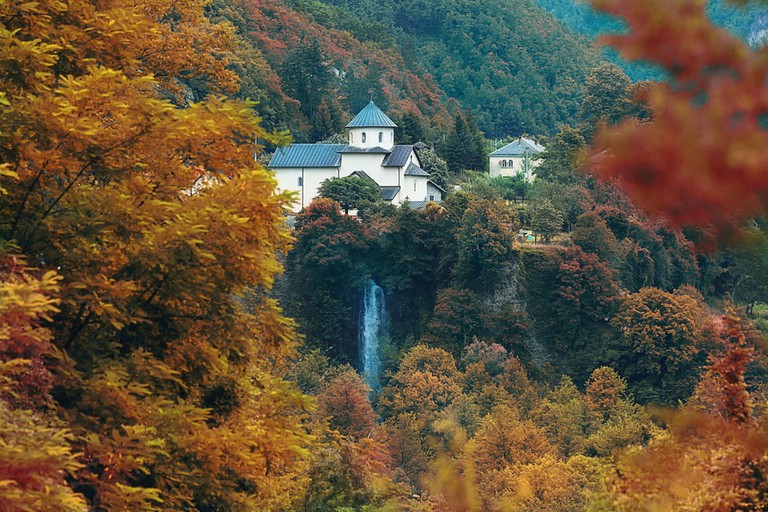 Moraca Monastery | © Kichigin/Shutterstock
Nestled in the hills of Kolasin, on the banks of the Moraca River, next to Svetigora Waterfall, Moraca Monastery was built in 1252 by Prince Stefan of the Nemanjic Dynasty. According to local legends, the yellow stone was mined in Tusina, some 45km away, and past hand-to-hand along a column of people. Many of the original frescoes inside the monastery were damaged by Ottoman Turks in 1505 and were repainted in the 16th and 17th centuries. A viewpoint near the monastery gives visitors a stunning view of Svetigora Waterfall coming out of the mountain just below the monastery itself.
Open In Google Maps
Serbia And Montenegro
Give us feedback
Give us feedback