A Festival Lover's Guide to Montenegro 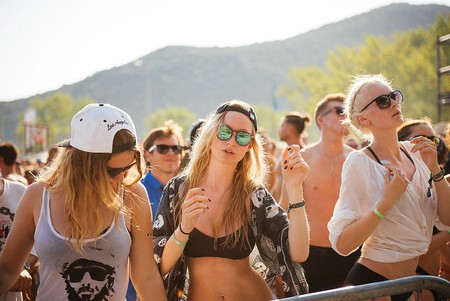 When the dark winter days give way to spring, Montenegro comes alive with festivals that continue throughout summer. Each area has its own unique celebrations featuring costumes, music and even free wine! Set in some stunning historical and natural locations, these are the must-see festivals in Montenegro.

Sea Dance Festival is Montenegro’s top music festival and takes place in July each year. People come from all over Europe to spend three days dancing and partying on the sand at Jaz Beach, a beautiful stretch surrounded by greenery.

The festival features artists like Sean Paul, Fatboy Slim and Jamiroquai, artists with hits everyone knows. There are also plenty of local and upcoming artists, all with a dance vibe. Every year around 80,000 people come to party and play on the beach at Sea Dance.

For those who like a more relaxed vibe, Southern Soul Festival is a funky three day music festival that takes place on Ulicinj’s Copacabana Beach every June. The festival features more hip and underground musicians who play a mix of soul, jazz, house and funk.

Copacabana Beach is also home to D’olcinium Kite Surf, so festival-goers can try their hand at kite surfing between dancing and relaxing on Ulcinj’s sandy beach.

Held in August each year, the festival shows feature films and documentaries from around the world. The films all have English subtitles and there are cafés and live music throughout the town after the showings.

Bokeljska Noc is Kotor’s must-see summer festival. The traditional festival features dozens of boats and floats which are elaborately decorated and compete against each other for the top prize. The boats parade along the Kotor waterfront, before onlookers are invited to a free, open air concert near the old town.

Lake Fest is Montenegro’s top rock music festival. Held every summer at Lake Krupac in Niksic, around 20,000 people gather for the three-night rockfest. Most of the artists are local and retro Yugoslav bands like Zabranjeno Pusenje (No Smoking) inspire nostalgia for the good old days.

The festival offers free camping in the forest surrounding the lake and drinks go for just €2. The festival is also eco-conscious, with eco workshops and rubbish-collection events.

Taking the prize for the longest running festival in Montenegro, Perast’s Fascinada has been going for over 500 years. The festival celebrates the founding of Our Lady of the Rocks, the man-made island church that floats like a beacon, just off Perast’s shore.

At sundown every 22nd July, a convoy of local barkas, small fishing boats, sets out decorated with poplar branches. They row along the length of the town, accompanied by local a cappella singers, and out towards the island. Each local family is represented, the men ride in the boats while the women wave from shore. At the island, rocks are thrown into the sea to celebrate the founding of the island and to keep it strong.

Montenegro sighs with relief when Herceg Novi’s Mimosa festival arrives in March. Winter’s long, dark days are over and spring has sprung, bursting to life with the bright yellow mimosa blossom.

The festival’s highlights include a traditional parade of marching girls and a brass band as well as a costume parade through the town. Along Baosici’s shores, free barbecued fish and wine are handed out while traditional Dalmatian klapa singers sing of love and the sea. Finally, in the town marina, a giant papier mache representation of the past year’s ills is ceremonially burned to signify new hope. 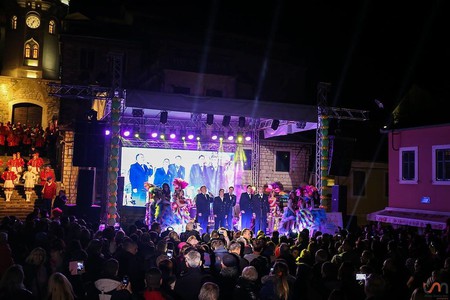 Budva’s three day carnival is one of the highlights of May in Montenegro. With costume parties and parades, open air theatre and concerts, the festival draws people from all along the coast of Montenegro.

The carnival is a highlight for children, with special puppet shows and masked balls for kids. The parade also includes a competition, with groups from Italy, Slovenia, Turkey, Macedonia, Serbia and Bosnia and Herzegovina all coming to compete for the prize of best costume.