Rebel With A Cause: The Musical Rebellion Of Leo Ferré

Born and raised in the principality of Monaco, the legendary singer and composer Léo Ferré is relatively unknown outside of the French speaking world, but is one of the most important and revered figures in popular music. 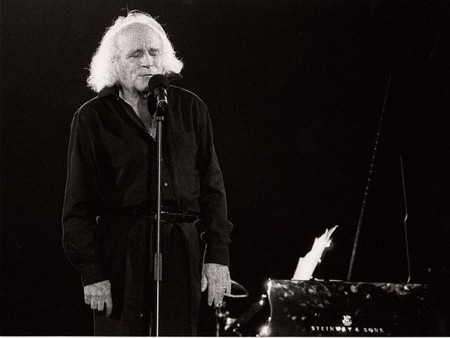 A celebrated early interpreter of the Francophone style known as ‘chanson’, a French ballad derived from the lyric poetry of the Middle Ages and the Renaissance, Leo Ferré peaked in commercial popularity in the late 1960’s and early 1970’s.

Ferré’s music lies in the grand tradition of theatrical, impassioned French torch singers, and he was a contemporary of Edith Piaf, who he encountered in 1945 after returning from service in the Second World War. Piaf encouraged the young Ferré to pursue a musical career in Paris. From his early beginnings in Parisian cabaret clubs, he displayed an extraordinary musical range as a performer, singing across a range of different styles from classical orchestration to love ballads and later, polemical pop songs. His most popular and well known song is the haunting Avec le Temps, which was recorded in 1970.

Ferré also released a series of interesting recordings which set his musical arrangements to interpretations of classic French symbolist poets. In 1956 and 1957, he recorded two albums featuring the poems of Louis Aragon and Charles Baudelaire. His 1964 double opus Verlaine et Rimbaud was the third of his series of recordings dedicated to French poetry, and is based on the works of 19th century homosexual poets and lovers, Paul Verlaine and Paul Rimbaud.

However, Ferré emerged as an increasingly controversial figure in his later life with his anti-establishment communist leaning views, and he developed a strong, passionate following amongst the burgeoning French youth movements during the protests of May 1968. An important figure in the transformation of French society and the changing of perception in the 1960’s, many of his lyrics espoused a bohemian, anti-bourgeois rebellious attitude and he challenged established ways of thinking in French society, even performing at concerts organised by the French Anarchist Federation. His social consciousness and political dissent is explicit in songs such as Le Temps Difficiles (1966), which makes pointed reference to the Algerian war and the torture of Algerians by French Troops.

A prolific and fascinating figure, the uncompromisingly outspoken Ferré continued recording and performing until his death in 1993. His public standing in the French consciousness has improved greatly since his passing and he is now highly revered as a cult hero, national treasure and an exemplar of the golden age of French popular music. The Franco-Monegasque singer was honoured in his birth place of Monaco in 2003 with the inauguration of a bronze sculpture in the newly named Place Leo Ferré, cementing his reputation as an iconic, enduring figure.