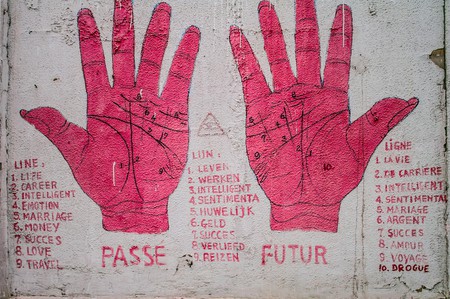 The narrator recalls two events from his childhood in Monaco in this piece by René Novella, found in the Monégasque section of our Global Anthology.

Two predictions have marked my childhood and adolescence, respectively.

The first, which did not come to pass, was stated by a Polish woman who lived on The Rock, not too far from my grandparents’ abode. She was bound by friendship with one of her neighbors and my grandmother. During the nice season, all three would arrange to meet, after dinner, to go on the Sainte-Barbe promenade to take the air until the carabiniers’ clarion rang at ten o’clock.

One evening, my grandmother, her friend and I—then nine years old—had been waiting for the Polish woman for quite some time, when my grandmother’s friend decided to call out for her. She yelled a few times: “Mrs Polof!” but no one appeared at the window of the small apartment occupied by the Polish woman. I then suggested calling her by her name: Mrs Smokovski. My grandmother and her friend looked at each other thunderstruck. They made me repeat this strange patronymic a number of times. The window opened after the first call. The Polish woman appeared and motioned to us she was coming down. Joining us, she excused herself for the delay and explained that her watch had stopped. She congratulated my grandmother’s friend for having remembered her name, difficult as it was to pronounce. But when she learned that it was me who had whispered it, she put her hand on my head and declared: “He will become a great man.” Dear Mrs Smokovski: you were a Polish woman, not a gypsy woman.

On the other hand, the gypsy woman who, reading my left palm in a Piedmontese village, where aged sixteen I was spending my holidays, was not wrong when she affirmed: “Lei non mangerà il pane del soldato” (You will not eat the bread of soldiers).

The translation comes courtesy of Éditions du Rocher, which published the story in its original French as part of the book Ces mots non envolés.