The Best Festivals and Events in Valletta 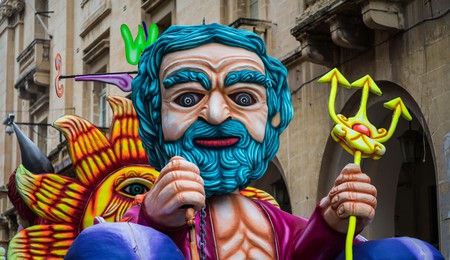 In addition to Valletta’s annual and biennial events and festivals which have been in place for a number of years, being awarded 2018’s Capital of Culture has seen new events added to the bill that will remain ongoing. Here’s our pick of the best on Valletta’s cultural calendar.

Fireworks in Malta date back to the time of the Order of the Knights of St John. Originally used to celebrate important feasts with pyrotechnics, grand displays where put on to announce and celebrate events such as the birth of a prince, or a newly elected Grand Master or Pope. Ongoing for centuries, fireworks are a huge part of Malta’s traditions, and are today predominantly used during village feasts celebrating their patron saints. With 35 firework factories on the island and each village in friendly rivalry as to who can put on the best display, these events are not to be missed. The Malta International Fireworks Festival takes place annually usually around April time. Now into its 17th year, the spectacular event organised by The Ministry for Tourism and the Malta Tourism Authority takes place at three different locations over Malta and Gozo, with the finale being held in the capital of Valletta.

Each year Valletta hosts the Malta Fashion Awards and Malta Fashion Week. The awards are now in their 20th edition and the Fashion Week its 8th. For the last few days of May and the beginning of June, Valletta plays host to showcasing the very best the Maltese fashion world has to offer the international market. A huge networking event for those in the industry, the season brings together bloggers, photographers, influencers and journalists in addition to guests, each capturing the event in the form of catwalk shows, award ceremonies, pop-up shops, workshops and exhibitions. An excellent opportunity to witness the best of Malta’s designers combined with the beautiful setting of Valletta as a backdrop.

Malta’s biggest arts and culture festival comes in the form of Notte Bianca, held annually for just one night in Valletta. Free of charge to attend, the capital provides a night filled with the best dance, theatre, music, visual arts, literary events and digital arts all taking place in public spaces and lining the streets of the capital. In addition to open-air theatres being set up, palaces and museums open their doors for theatre performances and art exhibitions, while cafes and restaurants extend their opening hours.

Organised by its own dedicated team, the Malta International Arts Festival (MIAF) comprises street and indoor performances dedicated to dance, opera, music, films, the visual arts, and community projects attracting visitors from both Malta and abroad. An opportunity to visit some of Valletta’s most renowned historical buildings while taking in the island’s rich culture, the annual event has performances and exhibitions taking place at venues such as the old University Theatre, the Mediterranean Conference Centre, and the St James Cavalier Centre. Taking place from the end of June to mid July, visitors can see the work of both well established artists and those new to the Maltese scene who dedicate months to prepare for the annual prestigious event.

The Choir Festival is a biennial event, with the next being in 2019. Initially launched in 1988 and quite small by comparison, 2017 saw a total of 36 choirs taking part in the event. Introducing choirs from both Malta and worldwide, the well-organised event sees Germany’s INTERKULTUR working in collaboration with the Malta Tourism Authority and Ministry for Tourism. Held at smaller various venues across the island, the main events take place at Floriana’s Catholic Institute and Valletta’s Mediterranean Conference Centre. With the event going from strength to strength each year and preparations already in place, 2019’s International Choir Festival is expected to be the biggest yet. Full details of dates for 2019’s festival are yet to be released.

Changing of the Guards

A more regular event is Valletta’s Changing of the Guards which takes place at 10.30am every last Friday of the month. Listen to the Armed Forces Band as they march down Valletta’s main street, Republic Street to the main square. A formal exchange of duties takes place, whereby the new guard replaces the old following a ceremony again led by the band and accompanied by a marching display. The ceremony dates back to the 17th century when the very first changing of the guard was by the Knights of St John in front of the Grand Master’s Palace. The procession lasts 45 minutes, and is a very different experience to that of the Changing of the Guards in the UK – it is well worth your time to witness if you are in the capital.