A Guide to the Spectacular Film and TV Locations of Malta 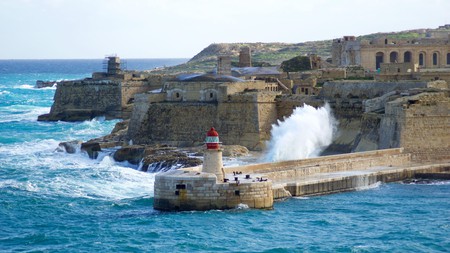 The list of films that have been shot on location in Malta is long and increasing every year. Culture Trip rounds up the places that you might recognise on the tiny Mediterranean island.

When you climb up to the scenic stone balcony of Upper Barrakka Gardens in Valletta to get what is said to be the best view of the Maltese capital, you might be struck by how familiar the skyline looks. The sandstone buildings spreading out into the deep blue Mediterranean have featured in a number of hit films and TV shows in recent years, and offer a clue as to why the island is still popular with filmmakers and fans of cinema to this day.

Even as Hollywood remains closed to large-scale productions in the aftermath of the global pandemic outbreak, the Malta Film Commission has announced that the cast and crew of the latest instalment in the Jurassic World franchise will be arriving to complete the filming of their film in August. It will be one of the first international-location shoots that any movie will undertake since May this year.

Unlike other European destinations famed for their cinematic outings, Malta remains something of an under-rated location. This works in its favour, however, as the forts, cliffs, beaches, stone buildings and blue seas around the island maintain a fresh presence on screen whenever we see them.

Malta and its two smaller satellite islands of Gozo and Comino have featured in various productions, arguably the most popular of which is Game of Thrones. HBO’s phenomenon used the rocky outcrops of Gozo for several scenes in the first series of the show, although the best-known location is sadly no longer standing. The famed Azure Window fell into the sea in 2017 after years of tourists getting a little too close to the naturally formed arch structure. 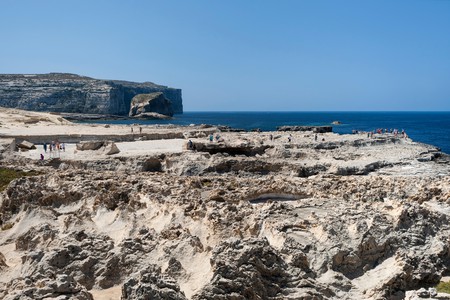 Dwejra Bay, on Gozo, was the setting for the Dothraki wedding scene in ‘Game of Thrones’ | | © Eric Nathan / Alamy Stock Photo

Thankfully, other locations are still standing today. Malta’s former capital, Mdina, known as the Silent City, is a medieval walled city with narrow streets, centuries-old buildings and, at its heart, a cathedral that dominates the skyline. Mdina featured in Game of Thrones, as did nearby Rabat, standing in for early depictions of King’s Landing. After the first series, Dubrovnik became the stand-in home for the Lannister clan, but those early scenes in and around the fantasy city were all filmed in Malta. The most creative use of Rabat was probably when Steven Spielberg swapped in the ancient town for the streets of 1970s Rome in Munich (2005). 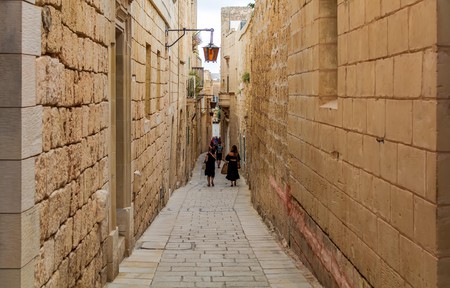 Real Hollywood glamour arrived in Malta in the form of Brad Pitt and Angelina Jolie, as the then power couple filmed the ultimately prophetic break-up movie By the Sea (2015) on Gozo. The movie, directed by Jolie, was initially lambasted by critics but has gained a cult following since its release. The locations represent an idyllic version of 1960s France, although, in reality, the movie was shot on Gozo during the couple’s extended honeymoon here in 2014, a year before the film was released. 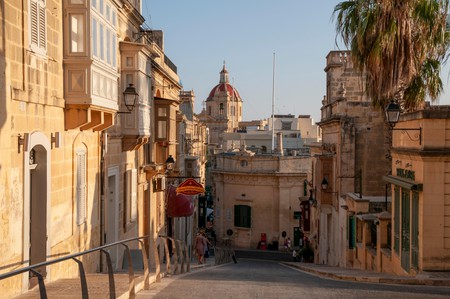 Malta’s smallest island, Comino, currently only has a population of three. It has one hotel and a very basic campsite, yet thousands of people flock here every day for one reason: the Blue Lagoon. Its mesmerising fluorescent waters are famous around the world and remain untainted even in the wake of the stink caused by box-office bomb Swept Away (2002), Madonna’s awful attempt to become a cinematic icon, which was shot here. The tiny island also featured in The Count of Monte Cristo (2002) to a greater degree of success. 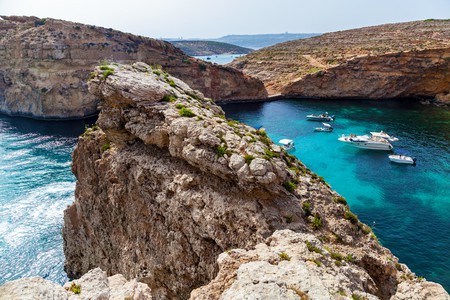 Situated on the east coast in Rinella, the Mediterranean Film Studios first opened in 1963 and has been the base for high-profile productions ever since. Two vast water tanks help filmmakers create the illusion of scenes shot miles out into the ocean, and you might have seen the studio in movies such as World War II epic U-571 (2000) and pirate adventure Cutthroat Island (1995).

The best-known individual location is also one of the most popular tourist attractions in Malta. Popeye Village was constructed for the sole purpose of serving as the location for 1980’s Popeye movie. Soon after filming wrapped, it was abandoned, but the collection of wooden buildings sitting on the cliffs of Anchor Bay found a new lease of life as a theme park.

Another location that has surged in popularity with visitors since it featured on screen is Naxxar’s opulent stately home, Palazzo Parisio. This grand location has stood in for two French chateaux, a Genoese hotel and even an Italian villa. 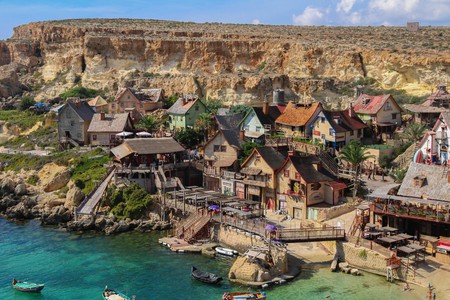 Back in the capital – which ends up featuring in most of the movies already mentioned as well as a number of others exclusively filmed here – Valletta‘s forts and walled sections make it perfect for period films. Fort Saint Elmo is home to the Malta Police Academy today, but in the past, it has doubled for a Turkish prison in Midnight Express (1978) and the streets of Beirut for a local production. Brad Pitt – who clearly loves it in Malta and makes another appearance on this list (and it won’t be his last) – fought off zombies in the harbour outside Fort Saint Elmo when it stood in for Jerusalem in World War Z (2013). 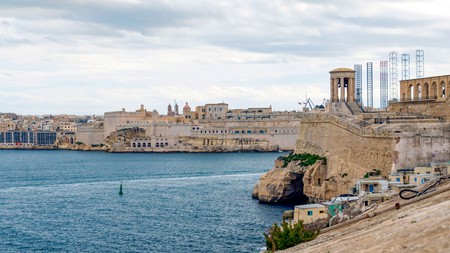 Another imposing fort, and one that sits on the tip of the island leading into the Mediterranean, is the location you are most likely to have seen on the big screen. Fort Ricasoli featured in Oscar-winning drama Gladiator (2000), another Brad Pitt movie, Troy (2004), and computer game adaptation Assassin’s Creed (2016). 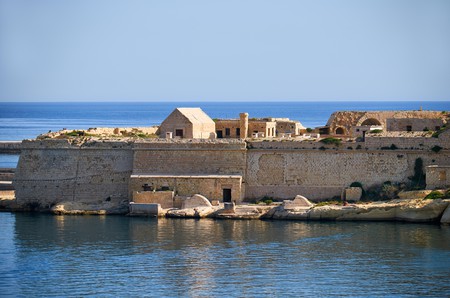 There appears to be no slowing down in Hollywood’s ongoing love affair with Malta, with more film productions looking to take advantage of the generous financial incentives offered by the government as well as authentic locations that are impossible to recreate elsewhere.