The 10 Best Festivals In Macedonia

Off the beaten track and little talked about amongst tourists, Macedonia is one of Europe‘s hidden gems, combining idyllic scenery with a diverse cultural history. The proud Macedonian people are careful to preserve their fascinating heritage, a fact illustrated through the rich variety of arts events and festivals on offer in the country. Ranging from celebrations of traditional regional folklore, to effervescent musical performances by some of the world’s most renowned artists, here’s our list of the 10 best festivals in Macedonia. 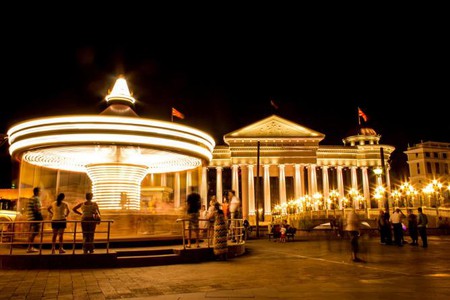 Showcasing a multifarious blend of bands and musicians from a number of musical genres, Taksirat Festival is a beacon of musical diversity that prides itself on being an international and universal music event. With thousands of revellers cramming into packed arenas, this event is Macedonia’s equivalent of Glastonbury or T in the Park, and past performers have included The Kaiser Chiefs and Iggy Pop. Taking place in Skopje, Macedonia’s vibrant capital, the festival is easily accessible from the city and guests can stay in its number of hotels and hostels. With food and drink stalls dotted all around the site, as well as a side programme of workshops, theater performances, films and discussion groups, visitors can spend days enjoying all the festival has to offer. Taskirat takes place at the end of November every year and stretches over a one week period, so guests can attend for one day, or choose to stay for the whole event.

The Manaki Brothers Film Festival is proudly one of the world’s oldest film festivals, and celebrates the work of cinematographers from around the globe. Established in 1979, this exciting event was inspired by Yanaki and Milton Manaki, the Macedonian brothers who pioneered 20th century film making in the Balkans with their documentaries and photographic art, some of which was made as early as 1904. Premiering films from a variety of genres, from short film to animation, the festival is a celebration of all things film, and aims to showcase the creative works of cinematographers both young and old, local and international. Festival-goers can be certain that the films are well-chosen, with its team of organisers remaining dedicated to selecting the most original, thematic and significant works of the year. Previous winners have included notable figures such as double Academy Award winner Branko Lustig, and the Silver Bear winning actress Victoria Abril. Set in the beautiful city of Bitola, an area of some fascinating ancient architecture, the Manaki Brothers Festival takes place every September.

Situated in the postcard-perfect mountain village of Galičnik in Northwestern Macedonia, this festival is a combination of tradition, local custom and heritage, taking place once a year over a two day period in July. The origin of the festival is this; in the beginning of the 20th century, Galičnik had only 5,000 residents, with its remote location and lack of industry forcing many of its younger inhabitants to move to larger cities in search of employment. Thus it was set that every year on the Saturday closest to St. Peter’s Day, those who had moved from the village would return. Many engaged couples would choose to get married on this day, in order to spend their wedding with family and friends before returning to their new homes. This sometimes saw over 40 couples marrying on the same day. Today, locals honor this custom by marrying one couple in the traditional Galičnik fashion, by dressing up in traditional costume, and by following a series of rituals which include playing instruments, singing, and dancing the Montenegrin Teškoto, an unmissable spectacle performed by a group of local men. Visitors to this festival can expect a unique and exhilarating atmosphere, and the chance to see an unforgettable wedding.

Ohrid Summer Festival is one of Macedonia’s biggest and most well-attended events, welcoming thousands of visitors from all over the world to join in the festivities. A festival of music, theater and dance, the event takes place over the space of a month in the picturesque city of Ohrid, a place with a history dating back to the 4th century BC when Lake Ohrid was inhabited by the ancient Greek Dassaretae tribe. The festival features plays, dance and music concerts from both professional and amateur performers, as well as operas and many other exciting events, all of which visitors can plan in advance when the festival programme is released. Having hosted such renowned performers as the Belgian violinist Vadim Repin, and the Russian opera star Elena Vasiliyevna Obraztsova, Ohrid promises to be a star-studded cultural event where visitors can watch shows in unique venues, such as the town’s ancient outdoor theater, or the 9th century Church of Sofia.

Since the first Skopje Jazz Festival in 1982 the event has become one of the leading music festivals in Macedonia, drawing international attention from Jazz fans all over the world, and featuring performances from jazz performers of all genres, from Bebop to Bossa Nova. As a non-governmental and non-profit organisation, the sole aim behind the festival is to exhibit some of the world’s best jazz, from daring contemporary artists pushing the boundaries of the genre, to world-renowned musicians such as the five time Grammy nominated Eliane Elias. Taking place in Skopje, the festival is a wonderful place to dance, drink and socialise with other jazz enthusiasts, who flock from far and wide to see world-class musicians come together in this lively city.

With a history stretching back to 1670, The Strumica Carnival preserves tradition in the true Macedonian style, ensuring that no classic custom is forgotten. Taking place every year, the carnival is held on the first days of the Great Lent, an Eastern Orthodox religious period. One big party stretching over a period of three days, the carnival comprises of a series of events, from dance and musical performances to parades and processions, all of which take place in the streets of Strumica, Macedonia’s largest city. Expect to see a colorful assortment of costumes, with the theme of disguise being a key element to the carnival, said to bring luck and fertility to young engaged couples waiting to be married in the region. The Sunday of the festival is reserved strictly for children, when they can dress up and come along with their parents to enjoy the spirited holiday atmosphere, and the traditional carnival day is on the Tuesday, when the town comes alive with music, singing, dancing and fireworks.

This international folklore event is one of the most intriguing and rousing festivals that Macedonia has to offer, celebrating the country’s rich cultural and social history in four of its prettiest seaside towns. Approximately 42,000 people are estimated to participate in this festival every year, exploring stories passed down from generation to generation through the medium of dance, song, rites and poetry. History buffs can marvel at the traditional costumes and instruments on display, and the festival is an excellent event for children and families to visit and learn about the country’s past in a fun and entertaining way, full of color and activity. With a number of inexpensive hotels nearby, and with festival events taking place just off the golden sands of Macedonia’s coastline, visitors can make a holiday of The Balkan Folklore Festival and enjoy both culture and beautiful surroundings.

Based on a philosophy aiming to combine culture, art and education, Strumica OPEN festival is a music festival like no other. With four separate stages showcasing a range of artists and musical styles, from folk and pop-rock to progressive house, music lovers are well catered for here and can find an artist for every one of their moods during the 10 day festival. With events ranging from packed gigs, to guitar lessons, to epic dance battles, revellers at OPEN fest can be sure to never be bored, and don’t need to stay up all night to enjoy the lively and vivacious atmosphere. Set in the heart of Macedonia’s largest city, and drawing in a young crowd, festival goers can take a few hours away from the festival to enjoy Strumica’s rich history as well as its interesting museums, restaurants and bars.

Celebrated on the 8th of September, Macedonian Independence Day is a public holiday commemorating the day in which the country gained its freedom from Yugoslavia in 1991, when it officially became a parliamentary democracy. On this proud day Macedonians take to the streets in a patriotic extravaganza which includes free music concerts, special themed dance performances, plays and a number of processions. Though small festivals and parades can be found in every Macedonian town and city on Independence Day, the main event takes place in Skopje’s historical Pella Square, where thousands gather to view a speech by the Prime Minister, as well as military marches, air shows and a stunning fireworks display. Visitors can even enjoy a water show in the square’s fountain, and can soak up the electric atmosphere easily, as both tourists and locals alike celebrate the country’s proud history.

The Macedonian Independence Day Celebrations take place throughout Macedonia on the 8th of September every year.

Macedonia’s answer to The Edinburgh Fringe Festival, Days of Comedy is an international theater and comedy event which takes place every year in the city of Kumanovo. Featuring comedy plays from several countries including Macedonia, Serbia, Bulgaria and Albania, Days of Comedy is a chance to see the Balkans’ funniest writers and performers at their best. Financed by the Ministry of Culture, Days of Comedy aims to enrich the Macedonian art scene by showcasing some of the most talented playwrights and actors in and around the region. It also aims to make visitors laugh until their sides split. Days of Comedy is held over a number of days in October, in the National Institution Cultural Center Trajko Prokopiev, in the heart of Kumanovo.