Luxembourgish Literature: In Search Of A National Voice

The development of a literary tradition in Luxembourg is intimately linked to the health of its native language: Luxembourgish, which for many years was at risk of being assimilated by the more dominant European languages of Luxembourg’s neighbors. Lindsay Parnell looks at the struggle for Luxembourgish and its literature. 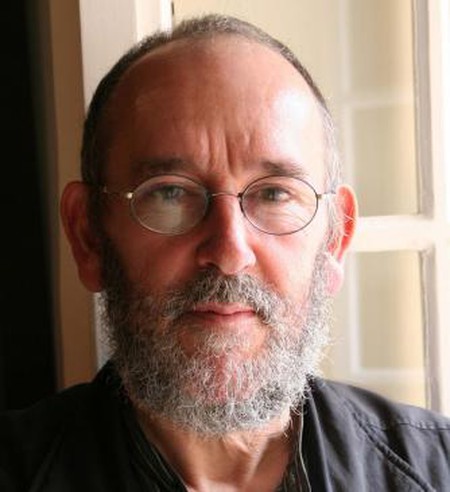 Featuring a dominant trio of languages – German, French and Luxembourgish – the literature of Luxembourg is a diversely rich canon of texts intertwined with the country’s pursuit of an emerging artistic and national Identity. Luxembourgish, the only language native to the country, was under threat of being wiped out until it was made the country’s official language in the 1980s, largely due to the passionate efforts by novelists Guy Rewenig and Roger Manderscheid. Luxembourgish and its literature has more recently become translated and appreciated beyond the borders of this tiny European country.

The inaugural text published in Luxembourgish (a linguistic hybrid of German and French and once regarded as ‘Lëtzebuerger Däitsch’) was a pamphlet of poems, E‘Schrek ob de‘Lezeburger Parnassus, published in 1829 by talented poet and mathematician Antoine Meyer. Incorporating fables, romantic verse and experimentation in poetic form, Meyer’s poetry established a firm artistic presence in the country’s national identity, leading the way for authors to come.

Luxembourg’s literary lineage continued with a loosely associated fellowship of Luxembourgish writers including Edmond de la Fontaine (also a beloved playwright known formerly by his pseudonym ‘Dicks’—his 1855 play De Scholtschäin was the country’s first ever theatrical stage production) and fellow poet, Michel Lentz. Although most commonly regarded for his literary contribution to his country in the writing of Luxembourg’s national anthem ‘Ons Hémécht’ (‘Our Homeland’), Lentz served as one of the country’s leading and most powerful poetic voices. Much like Edmond de la Fontaine before him, Lentz used an emerging language to examine, explore and define the existence of a newly established patriotism that lay beyond its German, French and Belgian neighbors.

Another of the country’s most admired texts was published in 1872 by acclaimed poet and the ‘last’ of the classical literary brothers, Michel Rodange. Rodange’s Rénert the Fox (pictured below) remains a powerful epic whose narrative is a satirical interrogation of fable, myth and language with a noticeable use of regional vernacular. 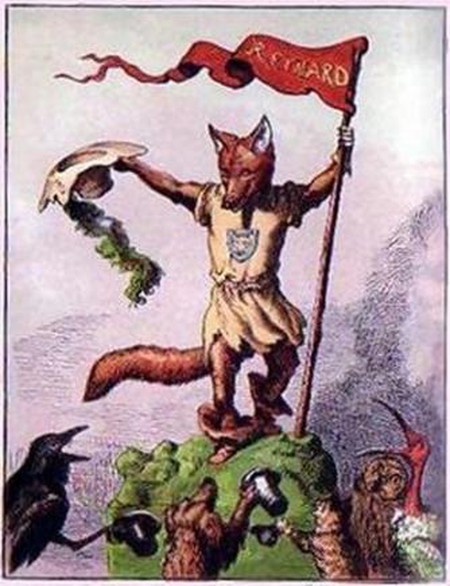 The beginning of the 20th century saw a rise in the literary arts and a subsequent development of critical analysis and review. Nik Welter quickly became one of the country’s most acclaimed authors, academics and literary critics. Internationally educated and widely admired for his contribution to both the Luxembourgish and Germanic canons, Welter was also a passionate politician who pioneered the arts whilst serving as his country’s Minister for Education. While the contemporary Luxembourgish canon is dominated by stage plays and poetry collections, the country and its artists witnessed a swell of fiction-based narratives following World War II. Anise Koltz gained much critical attention for her darkly inspired re-imaginations of classic fairytales, written in response to the horrific tragedies of the war. As creator of Journées littéraires de Mondorf, a yearly literary journal published first in 1963, Koltz remains a formidable influence on the Luxembourg arts and letters community. 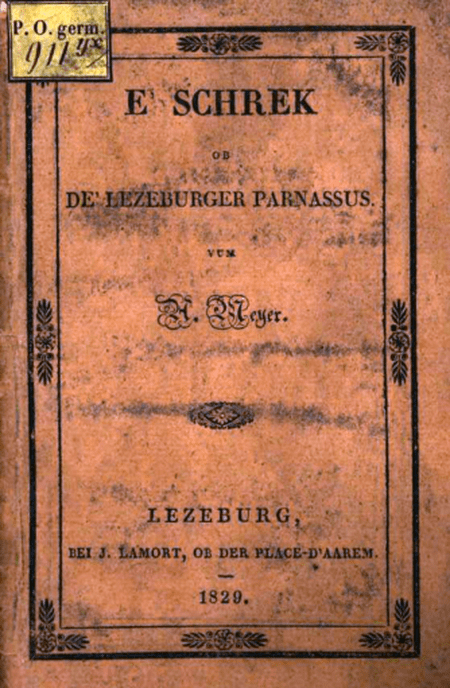 The struggle to make Luxembourgish the country’s official language was a prolonged effort. Championed by a duo of gifted novelists, Guy Rewenig and Roger Manderscheid, Luxembourgish was declared the country’s official language in the 1980s, nearly a century after the original publication of Meyer’s E’ Schrek op de’ Lezeburger Parnassus (pictured right). Both Rewenig and Manderscheid were crucial presences in the campaign for Luxemburgish as their homeland’s native tongue. Guy Rewenig’s writing career began in the early 1960s as a film reviewer for a serialized publication, Luxemburger Wort. His initial literary recognition came with the publication of his first collection of essays, 1970’s Als der Feigenbaum verdorrte, in addition to the production of his first play, Interview, first performed that same year. Channeling the efforts of Meyers over a century before him, in 1984 Rewenig released the first full-length novel to be written and published exclusively in Luxembourgish, Hannert dem Atlantik, which remains one of the most influential texts of the country’s literary canon. Luxembourgish continues to struggle as a national language, and is often subsumed within the dominance of French and German. However, thanks to individual writers and poets, Luxembourgish now has a literary identity, rooted in the culture and people of Luxembourg.