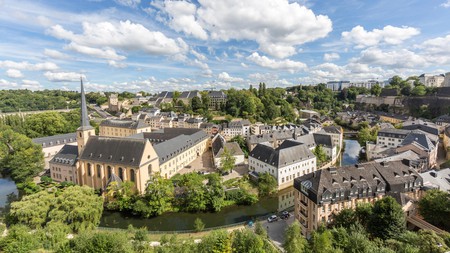 The only Grand Duchy in the world, Luxembourg is filled with architectural marvels, chic cafés and buzzing nightlife areas. If you’ve only got 24 hours to explore, here’s how to see the best of the city. 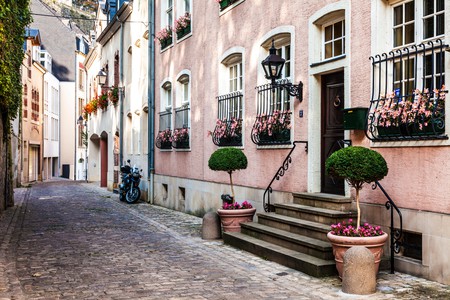 If you’re paying a visit to Luxembourg City, get ready for a day of walking through picturesque streets, uncovering the beautiful sights hiding around every corner. Due to its small size – the capital’s total area covers just over 50 square kilometres (19 square miles) – a lot can be seen and done in a single day, and the best part is that you can almost do everything on foot. Grab your camera and let yourself be awed by everything this underrated capital has to offer.

Start your morning with sweets and skateboarding

Before heading to the upper part of the capital, grab a bite at Kathy’s Deli & Cupcakery. Conveniently located near the station, it offers a selection of sweet and savoury bagels and baguettes to fuel you throughout the day. Grab one of their delicious baked goods and a coffee to go as you wander over the Old Bridge, stopping to admire the skills of the skateboarders practising their tricks in the skatepark next to the Pétrusse River. 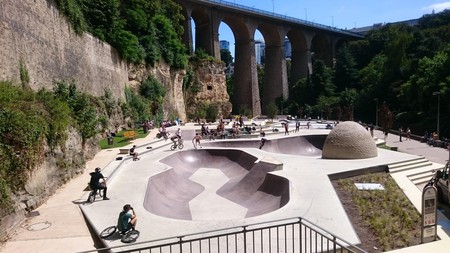 The first big stop in the morning is the famous Golden Lady, locally known as Gëlle Fra. The towering obelisk, topped by the statue of a woman, is the city’s war memorial and commemorates those who have fought for their country. Take a breath while gazing out over the beautiful green valley and the famous Baroque-style Notre-Dame Cathedral, before heading to Place Guillaume II. 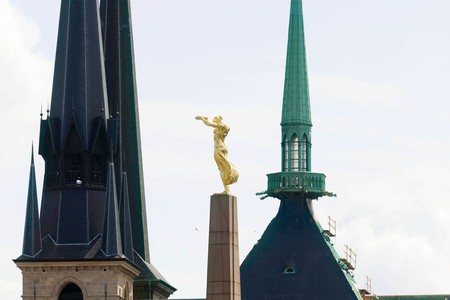 Stop by the palace

The square (known as ‘Knuedler’ by Luxembourgers) is one of two main squares in the capital, and is where you’ll find Luxembourg’s imposing city hall. From here, your way leads to an even more important building: the Palais Grand-Ducal, the city residence of the only grand-ducal family in the world. If you’re craving something sweet at this point, stop by the Chocolate House, where you’ll find extravagant treats, delicious hot chocolate and cakes fit for royalty.

Enjoy the breathtaking vista points of the Upper City

Next, get ready for some of the most impressive views on your journey through the city. Head towards the craggy towers of Luxembourg’s famous Bock Casemates, a large network of fortified ring walls giving the city its nickname The Gibraltar of the North. Here you’ll find Huelen Zant (literally, Hollow Tooth), which, while oddly named, is a striking background for any photos you might want to take of the city.

If you’d prefer to stay in the sunlight rather than exploring the fortress tunnels, you can step on the trail of the Corniche, known as Europe’s most beautiful balcony. This gives you a spectacular view over Grund, the lower part of the city.

If the weather is poor and you’re interested in uncovering more of Luxembourg’s history, pay a visit to the Musée National d’Histoire et d’Art instead of facing the ruins. The MNHA is closed on Mondays, but open from 10am–6pm the rest of the week, with a late opening on Thursdays until 8pm.

Do a little shopping

The next place you don’t want to miss is Place d’Armes, also called Plëss. In front of the Cercle Cité, this square is home to numerous bars and restaurants and alive with concerts, markets and events during the hot season. This is also a good starting point for any shopping spree in the city; take this opportunity to browse through some of Luxembourg’s small, artisanal shops. 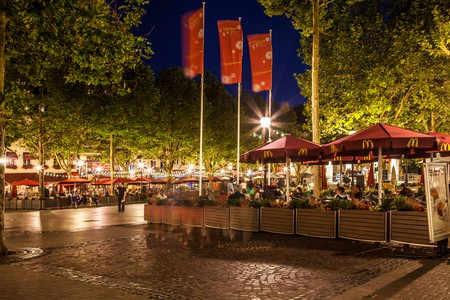 Refuel with a traditional lunch

When in the city, you can’t miss out on trying authentic Luxembourgish cuisine. The cosy Café-Restaurant Um Dierfgen serves up some of the capital’s most delicious meals: opt for Wäinzoossis mat Moschterzooss (a type of sausage served with mustard sauce) or Kniddelen mat Spéck (traditional Luxembourgish dumplings with cream and bacon.)

Check out the capital’s two levels

With your belly full of delicious food, get ready for the second part of your visit. Cross Boulevard Royal (where some of Luxembourg’s many grand banks are located) and the city Parc Kinnekswiss (which translates to ‘meadow of the king’).

Head to Glacis, the large square hosting the country’s famous annual Schueberfouer fairground. Here, you can take the tram to get to the Museum of Modern Art (MUDAM), Luxembourg’s famous music hall Philharmonie and Musée Dräi Eechelen, where the permanent collection is free to visit.

Alternatively, continue with the tram to the funicular at Kirchberg which will take you down to Pfaffenthal – one of Luxembourg’s older and very authentic quarters. Stroll around the cobbled streets and enjoy the district’s fine architecture before taking the glass elevator back up for incredible views of the valley below.

Pro tip: Public transport in Luxembourg is free; however, the country is still one of the most expensive places in the world, so if you’re into museums, galleries and other attractions that charge fees, you might consider getting the Luxembourg Card. You can buy this online before your stay or at different shops in the city. 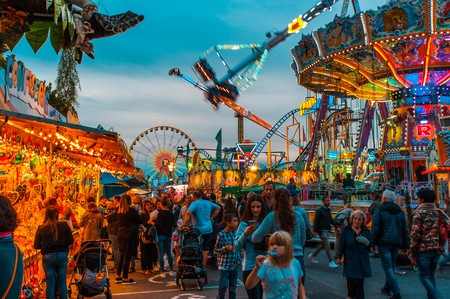 Stroll through the picturesque streets of Grund

You’ve seen the pretty area of Grund from above, now get right in there and explore it. Take the free elevator at Plateau Saint-Esprit, located in the court district of the capital and stepping out of the tunnel beneath the Upper City. Welcome to Grund: a quarter full of bars, cute little restaurants and traditional buildings. Head over the small bridge just in front of you, grab a beer at the small terrace of Scott’s Pub and enjoy the beautiful view over the River Alzette.

Enjoy dinner, drinks and some music

Brasserie Mansfeld is a sophisticated restaurant in Grund, and the perfect place to rest your feet and reminisce on the day’s adventures. If you’re still full from your heavy meal earlier, opt for a plate of cheeses and dried fruits or a platter of seafood tapas; they also do more filling dishes such as rib-eye steak, lobster ravioli and truffle linguine. For a digestif drink, step into the Café des Artistes, where candles shoved into empty wine bottles light up a cosy, cave-like bar (if you visit at the weekend, you might even be treated to a traditional tune or two played on the old piano).

Party alongside the ruins of an ancient fortress

As the sun sets, enjoy the last bits of Luxembourg’s history while walking through the inner courtyard of Abbey Neumunster. Beautifully illuminated at night, it’s a destination in its own right: don’t miss out on the Open Air Salsa Nights organized on Sunday evenings during summer. Cross over the old Stierchen Bridge, traversing up a quirky, ancient tower and along impressive private gardens, until you arrive at your last stop of the evening. Once a notable brewery area, Clausen is now the go-to place in Luxembourg for those looking to dance the night away. Almost like a small world on its own, the Rives are buzzing with nightlife, and there’s no better place in the city to see in the early hours of the morning. 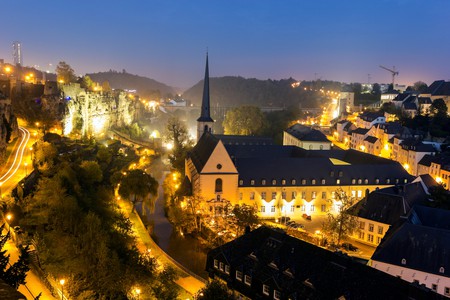