Why is Lithuania So Good at Basketball? 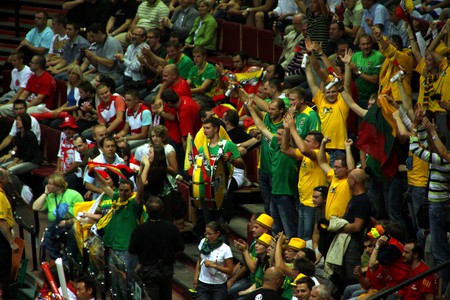 Basketball is a cultural phenomenon in Lithuania, so don’t get surprised if you hear Lithuanians saying that this game is the second religion of Lithuania. For many years now, people all over the world identify Lithuania as one of the strongest basketball nation in the world. But why?

Those two rather unexpected victories in EuroBasket were the reason why the popularity of basketball grew parabolically in Lithuania. The future seemed bright, but when WWII came, and the Soviet Union occupied Lithuania, its dreams to become the best basketball nation were crushed. 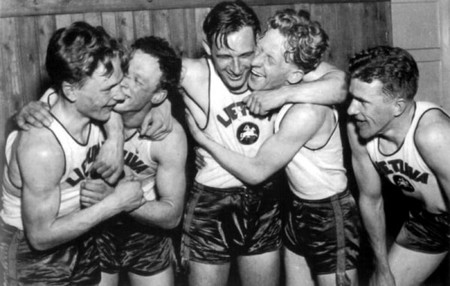 Under the Soviet Regime

Even though the Lithuanian basketball team did not exist from 1939 to 1991, Lithuanians never stopped playing basketball. Sadly, they had to play under the Soviet Union flag and win medals for its occupants. Of course, it was not the ideal scenario, but the best Lithuanian players had no other option to prove their greatness. And politics aside, the Soviet Union paid a lot of attention to sports as one of the ways to prove its power.

The Soviet Union won two Olympics, three FIBA World Cups, and 13 EuroBasket gold medals, and it was a dominant force in Europe when it came to basketball. Of course, players from Lithuania were always among the leaders of the Soviet Union team. Modestas Paulauskas, Stepas Butautas, Arvydas Sabonis, Šarūnas Marčiulionis, and many more Lithuanians played for the Soviet Union and carried it to victory. So, even though Lithuania did not officially exist, Lithuanian basketball never died.

After Lithuania regained independence on March 11, 1990, the Lithuanian national basketball team played in every single Olympic games. Only three other nations, including the U.S.A., can be proud of the same result. And Lithuania not only played in the Olympics but also won three bronze medals, including the one in 1992 when Lithuanians, with Sabonis and Marčiulions ahead, beat Russians in the bronze game. That game had a huge political meaning, and all of Lithuania celebrated the victory as if it regained independence for the second time.

The years went by, and Sabonis, Kurtinaitis, and Marčiulionis were replaced by younger Jasikevičius, Šiškausas, and Štombergas, but one thing never changed—Lithuania kept its place among the elite. And the more Lithuania won, the more young kids wanted to become basketball players. 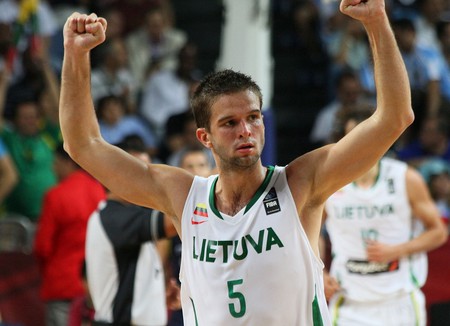 Basketball runs through Lithuanians’ veins, so every young boy has a dream to become a professional basketball player and defend their country’s pride. There are a lot of quality basketball schools in Lithuania for kids to achieve their dreams and most of the money, which Lithuania spend on sports, goes directly to basketball. This mix of cultural importance and strong infrastructure lets basketball be the number one sport in Lithuania.

Also, Lithuanians are among the top 20 tallest countries in the world, which is a huge advantage on a basketball field. For example, arguably the best ever Lithuanian basketball player, Arvydas Sabonis has a height of 2.21 meters. Jonas Valančiūnas, the big guy of Toronto Raptors, is 2.13 meters. 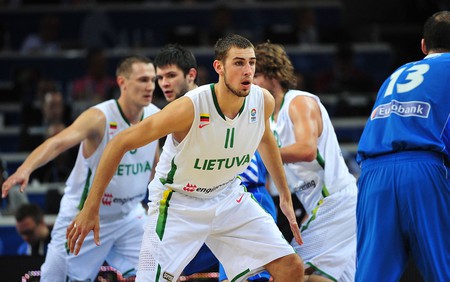 Pranas Lubinas is a two time EuroBasket champion, and de facto MVP of 1939 EuroBasket. Ironically, he couldn’t get the MVP award because he was too tall (1.98 meters) according to FIBA regulations.

Arvydas Sabonis is arguably the best Lithuanian basketball player. The center played for Real Madrid during his best years and only went to the NBA after a serious injury. Many analytics believe that he could easily be the best ever European basketball player if not for the injury.

Šarūnas Jasikevičius was the MVP of 2003 EuroBasket, in which Lithuania won gold medals. Many people crown Šarūnas as the best Lithuanian point guard to play the game. He is currently coaching Kaunas Žalgiris. 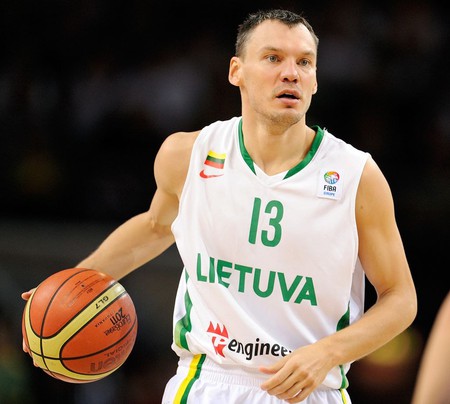 Šarūnas Marčiulionis was the first ever Lithuanian to play in the NBA. Šarūnas also introduced the Euro-step move to the USA and helped Lithuania win bronze medals in the 1992 and 1996 Olympics.

Rimas Kurtinaitis is the only non-NBA player ever to participate in the NBA All-Star Three-Point Contest. His three-pointers helped Lithuania to win many games throughout the years.

Ramūnas Šiškauskas was the captain of the Lithuanian national basketball team for many years and is known as the “Baltic Pippen” because of his similar game style to the legendary Scotty Pippen.

Jonas Valančiūnas is the center of Toronto Raptors and the leader of the current Lithuanian basketball team. He is yet to become a legend but is definitely on the right path.