Lithuania’s capital city, Vilnius, is one of the top cultural destinations within the Baltic states, boasting grand architecture and a busy arts calendar. Its rich mixture of galleries has plenty to offer enthusiasts, ranging from collections of national treasures to cutting-edge jewelry and textiles. Here we reveal ten of the city’s best contemporary art galleries. 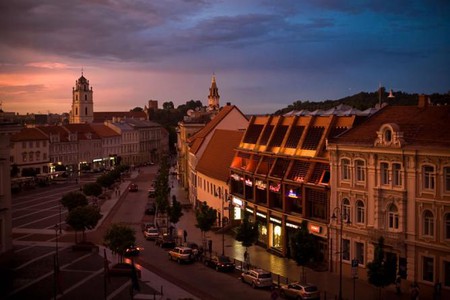 The Contemporary Art Centre in Vilnius, known locally as Šiuolaikinio Meno Centras, is one of the leading art institutions in the Baltic region. Its focus is on displaying the latest international trends by organizing up to six large-scale exhibitions per year, in addition to many smaller projects. Furthermore, the center arranges exhibitions abroad and is famous for hosting the Baltic Triennial of International Art, one of northern Europe’s most prestigious art festivals. Despite being non-collection based, the Contemporary Art Center is the permanent home of the Fluxus Archive, commemorating the work of Lithuanian Fluxus movement co-founder George Maciunas. A reading room and cinema, encouraging dialogue between art, film and other media, can also be found at the center.

Housed in a striking modernist building from the 1980s, the National Gallery of Art is a branch of the Lithuanian Art Museum. The gallery displays an extensive collection of 20th and 21st-century Lithuanian art in ten rooms. Arranged in chronological order, each room is themed around the prevalent styles and cultural influences of a defined historical period. The venue’s Grand Exhibition Hall also showcases the work of internationally based artists like Kęstutis Zapkus, one of the best known Lithuanian painters living in the USA. In addition, a 150-seat auditorium plays host to lectures, conferences, cultural events and film screenings. Other facilities include an information center, containing the most comprehensive national archive relating to Lithuanian artists. 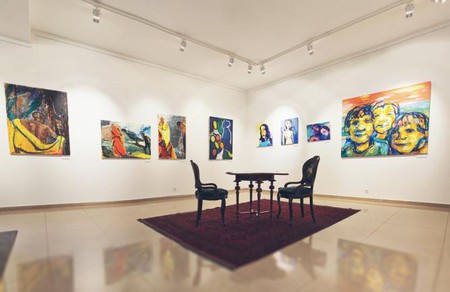 In 1990 Juškus Gallery opened in the center of the Old Town of Vilnius, next to Sereikiškės Park. Its main ambition has been to present elite Lithuanian and Baltic artists of the last century. However, the gallery’s scope is not limited to the 20th century, additionally endeavoring to showcase contemporary art in its program. Past exhibitions have featured renowned national artists, like expressionist painter Raimondas Martinėnas, and painter and former sculptor Aloyzas Smilingis. Juškus Gallery has also organized international shows and displayed work in an interesting range of venues, including churches, operas, music theaters, museums, and banks. Furthermore, its courtyard is sometimes the location for outdoor exhibitions and classical music concerts.

Founded in 1991, Galerija VARTAI was one of the first private galleries in Lithuania when the country regained independence after Soviet occupation. Since then it has acted as an important cultural hub, hosting concerts, discussions, and workshops, in addition to art exhibitions. Today it is one of the most prominent contemporary art galleries in the Baltic region, representing and exhibiting artists from home and abroad. It has a very international outlook, participating in major art fairs, and presenting exhibitions for the global project Artscape. Launched in 2009, during Vilnius’ year as European Capital of Culture, Artscape has showcased internationally acclaimed artists such as Knut Åsdam, Ignasi Aballi, Hans Op de Beeck, Tatjana Doll, Jesper Just, Atelier Van Lieshout, Alyson Shotz and Erwin Wurm.

Titanikas is the name of the exhibition hall belonging to the Vilnius Academy of Arts, the largest and oldest art university in the Baltics. It focuses on modern art, design, and graphics, hosting a diverse variety of exhibitions. Past displays at Titanikas have included collage and paintings by Vincas Kisarauskas, and an individualistic approach to neo-expressionism by Aistė Kirvelytė. The Vilnius Academy of Arts also exhibits new forms of textile art in the city’s ARTIFEX gallery, showcases jewelry at ARgenTum, preserves the traditions of folk art and weaving at Židinys (A. and A. Tamošaitis Gallery), and presents further visual art at Akademija. 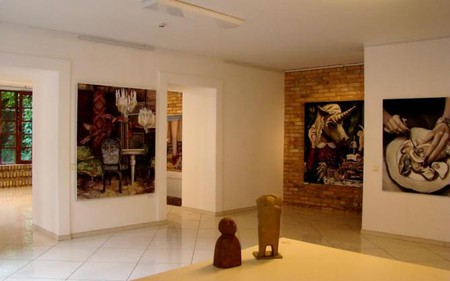 Displaying art from the 1960s to the present day, Galerija Aidas focuses on painting with the occasional inclusion of sculpture, printing, ceramics, and conceptual art. The gallery began its journey more than 20 years ago when it hosted an exhibition by Group 24, one of the new art groups that formed after independence from the Soviet Union. Ever since, it has represented Lithuanian artists like Valentinas Antanavičius, one of the country’s most famous assemblage artists. Galerija Aidas also champions national talent abroad by arranging international shows. The gallery in Vilnius hosts almost fortnightly exhibitions, which often juxtapose an artist’s early works with their later pieces.

Established in 2002, Meno Niša Galerija exhibits the work of both established and emerging artists in a wide variety of media. Past exhibitions have included works as diverse as conceptual metal art by Adolfas Šaulys, and uniquely distinctive paintings by promising young artist Jolanta Kyzikaitė. In keeping with Vilnius’ strong jewelry-making tradition, the gallery also represents contemporary jewelers like Sigitas Virpilaitis and Elzė Sakalinskaitė. Furthermore, Meno Niša Galerija has hosted enamel jewelry workshops and an international biennial of enamel art. The gallery regularly participates in ArtVilnius, an opportunity to showcase its output at the capital’s global contemporary art fair.

Located in the Old Town of Vilnius, the Arka Gallery is one of the city’s four galleries founded by the Lithuanian Artists’ Association. It is also one of the largest galleries in the capital, comprising nearly 500 square meters of exhibition space across six rooms. Arka Gallery arranges up to 40 exhibitions annually, including those throughout Lithuania and abroad. It displays a broad range of media, from glass art exhibitions to drawings and prints by artists like Czech cultural icon Oldřich Kulhánek. In the past it has hosted national textile biennials, presenting innovative textile works. The gallery also organizes cultural events, such as concerts and book launches. 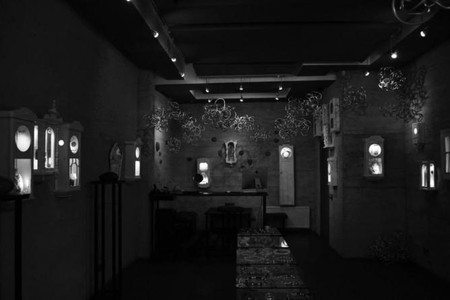 ‘Terra recognita‘ is a private institution that operates a gallery, which was founded in 2009 by artist Saulius Vaitiekūnas. Lithuanian-born Vaitiekūnas is known for his ambitious sculptures that combine everyday objects with heavy-duty materials, like wood, stone, and metal, in powerfully simple designs. Galerija ‘terra recognita’ presents dynamic works by Vaitiekūnas, including his playful sculptures and installations, as well as contemporary jewelry in beautiful minimalist designs. Furthermore, ‘terra recognita’ encompasses a fund that aims to conserve and develop Lithuanian art heritage; its ambitions entail supporting artists financially and creating educational programs involving metal and stonework techniques.

The contemporary visual art and jewelry on display at (AV17) GALERIJA contrasts boldly with the old-world charm of the 17th-century building it is housed in. The gallery aims to promote Lithuanian art to an international audience, as well as introduce foreign artists to Vilnius. Monthly shows are orientated towards conceptual art, such as the humorously inventive exhibition Motor, Latex and Air by Kestutis Svirnelis. Experimentation is also prevalent in the gallery’s jewelry exhibitions, such as Francine Oeyen‘s collection of painted and embroidered discarded materials, creating colorful, eye-catching pieces. In addition to exhibitions, (AV17) GALERIJA organizes evenings dedicated to fashion, literature, music or performance.