The Best Day Trips from Vilnius 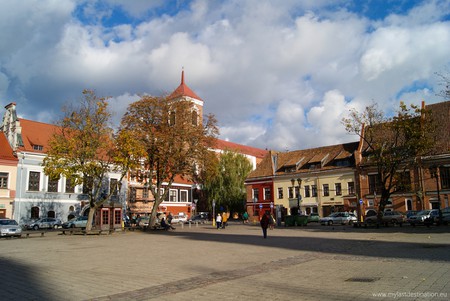 When travelers grow weary of visiting Vilnius’ stunning churches, green parks, and bustling squares, a day trip outside of Vilnius might be exactly what the doctor ordered, especially since there are numerous day trip options that provide a taste of Lithuanian culture. Whether by car, bus, or train, the ten possible day trips detailed below can all be reached within approximately three hours or less. Spend a few hours or a full day with either a city break or a visit to the countryside for fresh air.

Kaunas, Lithuania’ second largest city, is easily reached by train in slightly more than an hour. The tree-lined Laisves al. (meaning freedom in English) is dotted with shops, restaurants, and cafés including the local favorites Green Cafe and Caffe Mio. Also in Kaunas is the picturesque medieval old town and brick Kaunas Castle from the 14th century. In all seasons, numerous brides and grooms can be seen in loving embraces in the City Hall Square in which civil marriages are registered. The oldest building in Kaunas — Vytautas Church — lies next to the City Hall Square and was commissioned in 1399. 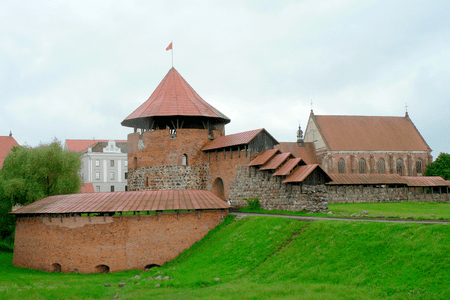 Only about 45 minutes away from Vilnius by train or bus, Trakai is one of Lithuania’s five national parks. Featuring stunning landscapes with blue lakes surrounded by stands of evergreen trees, Trakai is certainly popular in warm weather. The standout features of Trakai have to be Trakai Island Castle, which is located on an island in a lake, and the Karaite town with a Karaite church, museum, and colorful, wooden homes.

Walking through the town of Trakai is also not to be missed, as visitors will get a taste of Karaite culture. Karaites are people of Turkish origin who settled along the lakes in Trakai in the 14th century. The Karaites brought with them the kibinai, which is a meat, vegetable, cheese, or jam-filled hand pie that can be tasted in most restaurants in Trakai. 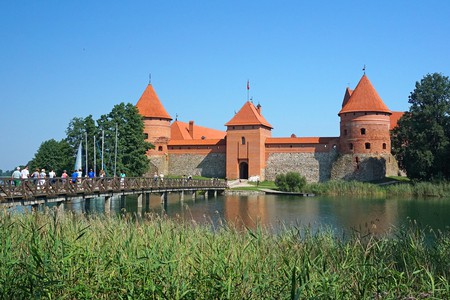 Travelers interested in learning more about Lithuanian culture might like the sound of a day trip to the Rumsiskes Open Air Museum of Lithuania. Located approximately one hour away by car, the Open Air Museum is one of the largest open-air ethnographic museums in Europe. It features 195 hectares comprising historic homes from the five different ethnographic regions of Lithuania: Dzukija, Aukstaitija, Suvalkija, Zemaitija, and Lithuania minor.

In one part of the park, find a representative small village with a schoolhouse, church, restaurant, and a few shops. In the Zemaitija region, see a wooden windmill and friendly goats, and enter homes decorated with traditional furnishings. The Suvalkija region consists of bee hives, homesteads, and a home of a forest dweller. The Rumsiskes Open Air Museum of Lithuania is rather expansive, so it may be best to allot a full day to visit. 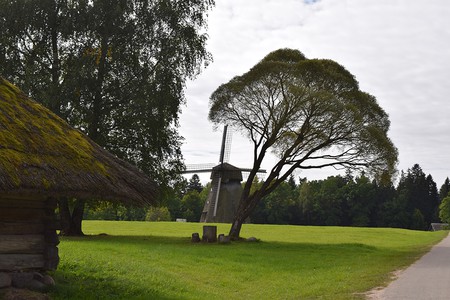 Located approximately six km from Kaunas’ city center, the Ninth Fort is an impressive fort and memorial. The fort itself was built by the Russian Empire in the early 1900s as protection for Kaunas, which at that time was the capital of Lithuania. Later, the Ninth Fort was turned into a hard labor prison and then was the site of a mass murder of Jews by Nazis with some 9,200 Jewish people murdered on October 29, 1941. It is estimated that approximately 50,000 people were killed at the Ninth Fort during WWII.

The museum at the Ninth Fort opened in 1959, and the memorial opened in 1984. Exhibits within the museum depict life in exile during Russian occupation of Lithuania in the 1940s and 1950s. Thousands of Lithuanians exiled during this time were deported to severe areas of Siberia, causing much suffering and death. The memorial was designed by Alfonsas Vincentas Ambraziunas, Gediminas Baravykas, and Vytautas Vielius and is a 32-meter-tall monument to commemorate those killed during WWII. 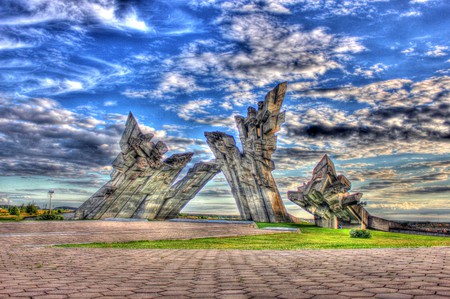 Those interested in taking a day-long road trip may be excited to hear about the castles along Panamune Road. The scenic Panamune Road follows the Nemunas River Valley and connects Kaunas with Klaipeda. Along the way, several castles and manors can be visited depending on your available time.

Raudondvaris is a red brick manor that was built in the 16th and 17th centuries and is located not far from Kaunas. Further along the route is Raudone Castle, which features a 33.5-meter-high gothic tower. Raudone Castle was originally built in the 16th century, but required massive reconstruction after becoming damaged during WWII. Panamune Castle dates to 1604 and is built in the Renaissance style. This dark colored castle now houses a museum, and the towers can be visited. 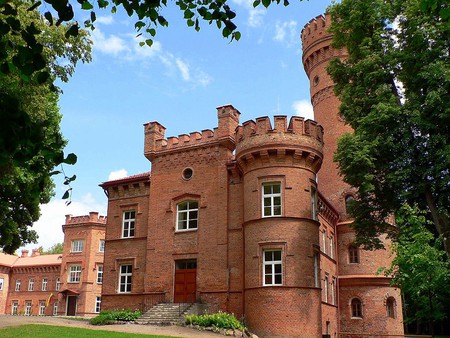 Grūtas Park is an open-air sculpture park and museum housing old Soviet statues that were removed from cities and towns all over Lithuania. Larger than life statues of Joseph Stalin, Vladimir Lenin, and other Soviet figures loom over the park, creating an eerie atmosphere. Adding to the creepy feel of the park are the watch towers quietly playing Soviet music, tanks, and small indoor expositions. If visitors have already familiarized themselves with Vilnius or other areas of Lithuania, historic photographs of the statues standing in the former location prove quite interesting. Note that the park also contains a small zoo with animals that do not look well taken care of.

Grūtas Park is located near the resort town of Druskininkai and is approximately one hour and forty-five minutes away by car. Entrance costs either 7.50 or 6 euros for adults depending on the season. 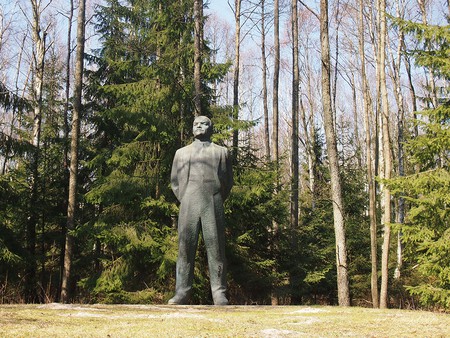 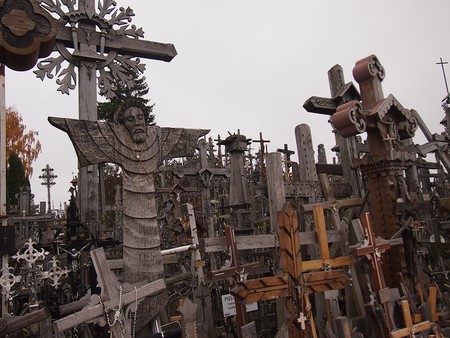 Open seasonally from late May until early September, the Lithuanian Museum of Ancient Beekeeping makes for an educational day trip from Vilnius. Lithuania is well known for its honey production and consumption, and Lithuanians frequently use honey in the production of Lithuanian mead, tea, or in desserts such as grybukai cookies. Beeswax is also commonly used in the production of candles.

Located in Stripeikiai Village, the Lithuanian Museum of Ancient Beekeeping can be reached in approximately one hour and forty minutes by car from Vilnius. 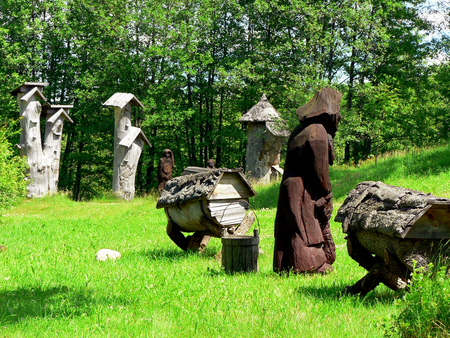 Zarasai is a small town very near the Latvian border that is approximately two hours away from Vilnius by car. The main draw to visit Zarasai is its impressive overlook bridge that is 17 meters tall, curving in a loop over the large Zarasas Lake. The unobstructed views of the lake containing a large island are stunning. Additionally in Zarasai, visitors can rent boats or bicycles to explore the town and shore of Zarasas Lake. Sculptures are also dotted along the shore of the lake. 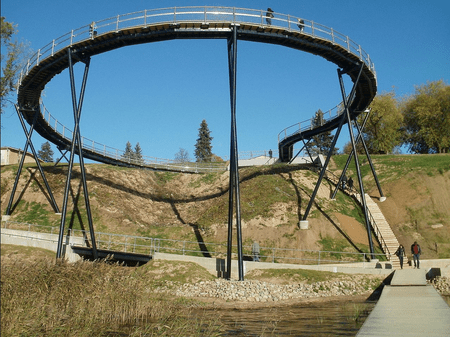 Located in the town of Kernave, numerous forts, settlements, burial sites, and hill fortification mounds can be visited over 194 hectares. Visitors can walk along paths leading up and down the fortification mounds, some providing excellent views of this world heritage site. Kernave can be reached in about 45 minutes by car from Vilnius, making it an excellent and easy way to spend a day out of the city. 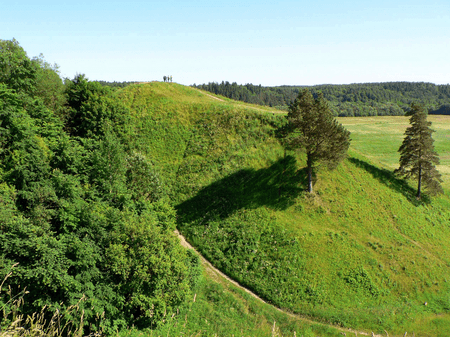 © Wojsyl/Wikimedia Commons
Give us feedback