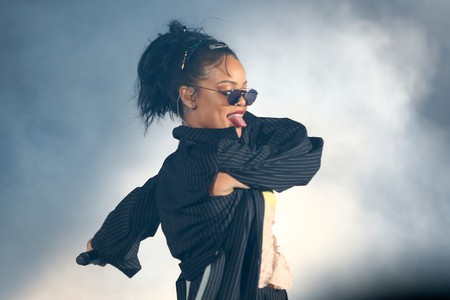 Well, the day has come. Bad Gal Riri has officially joined the 30’s club, and the brightest diamond among all her birthday gifts may very well be this tribute artwork.

The artwork is a genuinely lifelike nude sculpture of the singer covered in Jean-Michel Basquiat-inspired body paint and sporting a Riri-branded American football helmet with Basquiat’s signature crown floating above her name.

When asked by artnet if the popstar was aware of the tribute, Askelovic revealed: ‘As [she] liked a photo of the sculpture on my Instagram page, I guess the sculpture will not be a surprise! I hope she enjoys it and will accept it as a special gift from me.’

According to his Instagram bio, the artist is a ‘Hyperrealistic Interpretative Sculptor’, and this definitely shines through in this silicone, fibreglass and resin-made work, which really looks like the actual Barbadian icon.

Askelovic, who works out of his studio in Germany, has in fact created three variations of the Rihanna/JMB piece, which he describes as ‘a symbiosis of Rihanna and Basquiat.’ One of the sculptures, as mentioned, is being gifted by the artist to the singer for her 30th birthday on 20th February, and a second one will be presented at the launch of JD Malat gallery in London’s Mayfair, on sale for £32,000 ($45,000).

The project took Askelovic five months to complete and boasts some truly impressive detail, even showcasing Rihanna’s actual tattoos, interpreted in the style of the deceased street artist.

Connecting Basquiat and Rihanna is not an entirely new idea, however. The album art for RiRi’s 2016 chart-topping ANTI features a gold crown, which could be construed as reminiscent of Basquiat.

In the words of French gallerist Jean-David Malat, at who’s space the work will be debuted, ‘Edgar Askelovic’s Rihanna is an intriguing example of the innovation of today’s up-and-coming artists.

‘I look forward to introducing Askelovic’s work to a wider audience at my new gallery,’ Malat said.