Commemorating the Jewish People of Kaunas: The Monument to the Victims of Fascism 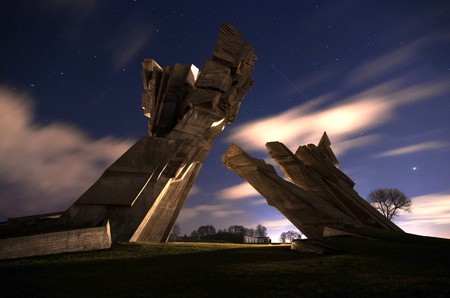 Monument at the 9th Fort | © Andrius_Saz/Shutterstock

Vilnius doesn’t have all of the must-see attractions and historical monuments in Lithuania. Located in Kaunas, Lithuania’s second largest city, visitors will encounter the Ninth Fort of Kaunas and the Monument to the Victims of Fascism. This fort and monument holds chilling, terrible history as a site of mass murder during the Holocaust.

In the late 1880s, the Russian Empire built numerous fortresses and batteries around Kaunas as an extensive defense system against the rest of Europe. The Ninth Fort was built in the beginning of the 1900s and remained in good condition throughout WWI. In 1915, the German army occupied the Ninth Fort, and it was eventually turned it into a prison. In 1940, when Lithuania was occupied by the Soviet Union, the Ninth Fort became a prisoner transfer point, but this was short-lived. June 1941 saw intense battles between the Soviet Union and Germany, with the battles and violence escalating in October of the same year. In October alone, at least 11,045 Jews were murdered including men, women, children, and the elderly. No one was spared. 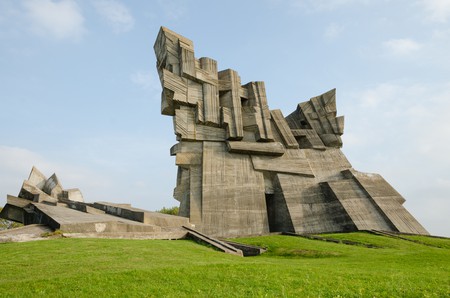 From October 1941 until August 1944, more Jewish people as well as foreigners from Austria, Poland, France, Germany, and the Soviet Union were murdered. Historians believe that approximately 50,000 people were murdered at the Ninth Fort during WWII. Towards the end of WWII, Nazis began destroying evidence of the mass murders that were committed. 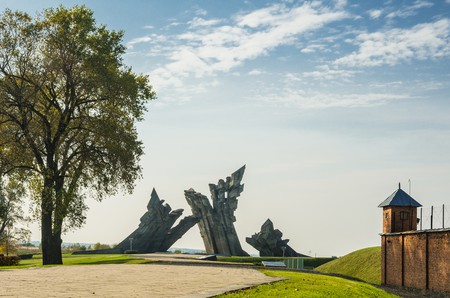 Memorial at the 9th Fort | ©MoLarjung/Shutterstock

A museum describing this painful time in Lithuania’s history was opened in the Ninth Fort in 1959. This well-done museum promotes research into the mass murder and also describes Lithuanian exile. Several years after the opening of the museum, a memorial complex was commissioned and a competition was held to choose the design of the memorial. Design competitions were held from 1966 until 1970, and three designers, Alfonsas Vincentas Ambraziunas, Gediminas Baravykas, and Vytautas Vielius, won the competition. These three designers constructed the 32-meter monument over thirteen years, and the final structure consisted of three groups of sculptures to commemorate victims of the Nazi army. 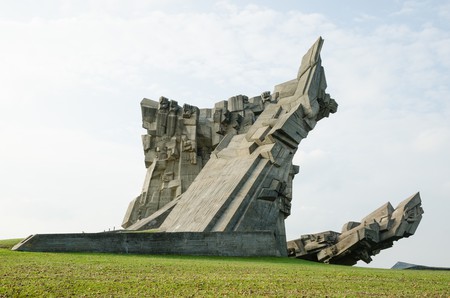 The monument is a stark, grey structure rising sharply up from the ground. It features ragged edges and understated, stern faces. The jagged, sharp top of the monument features the carved fists common of Soviet propaganda. Numerous plaques lined with flowers can be found surrounding the monument.

An additional museum building and walking paths were also created during this time, and in 1984 the new memorial complex was opened as one of the largest memorials in all of Europe. The Ninth Fort Museum and Memorial Complex can be visited from Wednesday to Sunday from 10 am until 4 pm. Museum ticket prices start at 1.50 EUR.