Riga has become a top holiday destination for travelers from all over the world. The Old Town is the city’s very heart, showcasing well-preserved medieval architecture and narrow cobbled streets at every corner. From astonishing architecture to world-class museums, take a look at the top 10 things to see and do in this UNESCO World Heritage site. 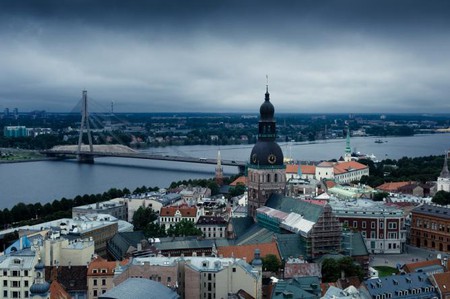 This Lutheran church is one of the oldest monument in Riga, though it looked now looks completely different from the original building, of which very little remains. What can be seen today is for the most part from the 15th and 17th centuries. The church’s 123-meter steeple, dominating the city, is unmissable. From there, the view of the Old Town and of the Daugava River is breath-taking, but make sure to go on a clear day. That being said, the interior should not be overlooked, as its three basilicas provide a fascinating insight into Riga’s history. The church also holds temporary exhibitions of works by local artists.

This iconic square, a meeting place since the late 13th century, is a must-see for any visitor. Here Riga’s Hanseatic architecture is at its best, culminating in the world-famous House of Blackheads, built in the 14th century but so-called because in the 17th century its occupants were the merchants of the Brotherhood of Blackheads. It was unfortunately destroyed during World War II but has been rebuilt and stands as beautiful as ever since 1999. In addition to this important building, the square is home to a leading venue for contemporary art and to numerous bars and cafés, giving it a pleasant, old-fashioned atmosphere. 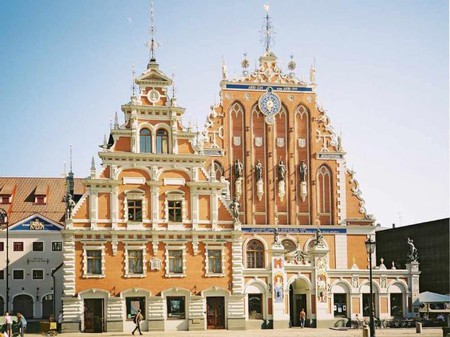 Although Saint Peter’s is the more famous of the two, this church is Riga’s cathedral and deserves to be seen in its own right. It is so beautiful composer Franz Liszt wrote a piece in its honor. Built in the 13th century, it’s the largest medieval church in the Baltics but, like a lot of Riga’s landmarks, it has undergone extensive modifications since its foundation. Don’t forget to have a look at its organ, one of the biggest in Europe, and at its medieval cloisters.

Sit down at a café

Exploring the Old Town can be exhausting. To catch your breath, sit down in one of Riga’s charming cafés – on a terrace if it’s not too cold – and watch tourists and locals go about their business around, making Riga bustle with life. There you can, of course, have a cup of tea or coffee while people-watching, but why not give Latvia’s national (alcoholic) drink, Riga Black Balsam, a try? Among Riga’s various establishments, we particularly like literary café Kafka, whose coffee is probably the best in the city.

Admire the Swedish Gate and the medieval streets

History buffs will love walking along the largest remaining portion of the medieval town walls to walk through the seventh-century Swedish Gate, the only remaining entrance to the Old Riga. It takes its name from the fact that back then Riga was part of the Swedish Empire. The oldest and narrowest streets in Riga, dating from the 13th and 14th century, sprawl beyond it, full of chatter from the lively bars and cafés that line them, such as local favorite I Love You.

Museum of the Occupation of Latvia

Museum of the Occupation of Latvia

A big black building stands next to the beautiful Hanseatic architecture of the Town Hall Square: the Museum of the Occupation of Latvia. This haunting memorial of the period from 1940 to 1991 when Latvia was occupied by Soviet Russia, Nazi Germany, and then Soviet Russia again is really worth visiting to get a tangible glimpse of Latvia’s traumatic 20th-century history and remember the countless victims of World War II and of the Soviet Union.

The impressive nineteenth-century arsenal building has been turned into Latvia’s largest exhibition hall and now hosts some of the most exciting exhibitions of Latvian art. The permanent displays comprises a collection of modern and contemporary paintings, sculptures and drawings by Latvian or Latvian-born artists like Jūlijs Feders, Janis Rozentāls and Vilhelms Purvītis. The temporary exhibitions are very varied, highlighting the work of artists from all over the world, such as Luxembourg-born photograph Edward Steichen. All in all, the Arsenal is one of the best art museums in Latvia and essential for anyone interested in the country’s cultural history.

‘The Three Brothers’ is the nickname given to the three buildings in Maza Pils street forming Riga’s oldest complex of dwelling houses. Though very little is known about their history, each building illustrates a different period of the city’s architectural development. The oldest one, 17 Maza Pils Street, was built in the 15th century and has crow-stepped gables and Gothic and Renaissance elements, while the neighboring house, 19 Maza Pils, shows Dutch Mannerist influence, and the last one, house number 21, exemplifies 17th century Baroque architecture. Today, the buildings house the Latvian Museum of Architecture.

Go out at night

Riga is an increasingly popular party hotspot, combining all the fun of big Western European cities and none of their high prices. The nightlife is concentrated in the Old Town, conveniently also where most hostels are located. There’s a little of everything hiding in Riga after dusk, from huge mainstream clubs to quiet cozy bars to alternative cultural centers. Have fun, but beware of stumbling on the cobblestones and of scammers preying on drunk tourists.

Riga Castle is another 14th-century Latvian monument that has been destroyed and rebuilt throughout the centuries. It is now home not only to the National History Museum, but also to the President’s residence and offices. For this reason, much of it is off-limits so keep to the tourist parts unless you fancy a run-in with angry Latvians. The museum is full of artifacts from Latvian history, including coins and costumes, but there is very little information available in English. Nevertheless, visiting the castle is worth it if only to admire the fortifications and take in the view of the Daugava. This monument was unfortunately damaged in a fire in 2013 so two years later parts of it are still undergoing renovation.