The Old Town is Riga’s very heart, and a place where ancient history, Latvian culture, and lively nightlife meet. It’s only natural that this mix be accompanied by a wide range of excellent restaurants. We list the 10 best in this UNESCO World Heritage site.

Great food, friendly staff, and a perfect location just a few minutes’ walk from St Peter’s Church: Domini Canes has it all. It’s no wonder this restaurant consistently finds itself in the top five best restaurants in Riga on travelers’ and locals’ lists. It is great by Latvian standards but also measures up to all the best of London, Tokyo, and Paris. The scallops, for example, are particularly worth exploring. In addition, all products are locally sourced and the menu is seasonal. Booking is recommended.

Folkklubs Ala Pagrabs is a popular bar and restaurant serving authentic Latvian food in a rustic setting reminiscent of the Baltic countryside. The food is, unsurprisingly, meat- and potato-heavy and incredibly filling. There are very few vegetarian options, but what there are, such as the stuffed zucchini, is just as hearty as the beef and pork dishes. The décor is simple, with large wooden tables guests can share with strangers, or smaller ones in the many nooks and crannies of the surprisingly large basement the restaurant is in. Stay for a beer or two after dinner and you’ll be sure to meet locals and hear Latvian folk music.
https://www.instagram.com/p/BWkSa8ijf8A/?taken-at=5232421
Open In Google Maps
19 Peldu iela, Centra rajons Rīga, 1050, Latvia
+37127796914
Visit Website
Visit Facebook page
Give us feedback

3 pavāru restorāns, as the name indicates, is the creation of three well-known local chefs: Mārtiņš Sirmais, Artūrs Trinkuns, and Ēriks Dreibants. It is located in the historic Jacob’s Barracks, adding a bright and hip interior to the eighteenth-century building. Patrons can watch as their food is prepared in the open-plan kitchen in the center of the dining room, cooking such elaborate dishes as slow-cooked ox heart with ox tongue, goat cheese puff pastry tart, or, for vegetarians, wild mushroom risotto with spinach and Brie. 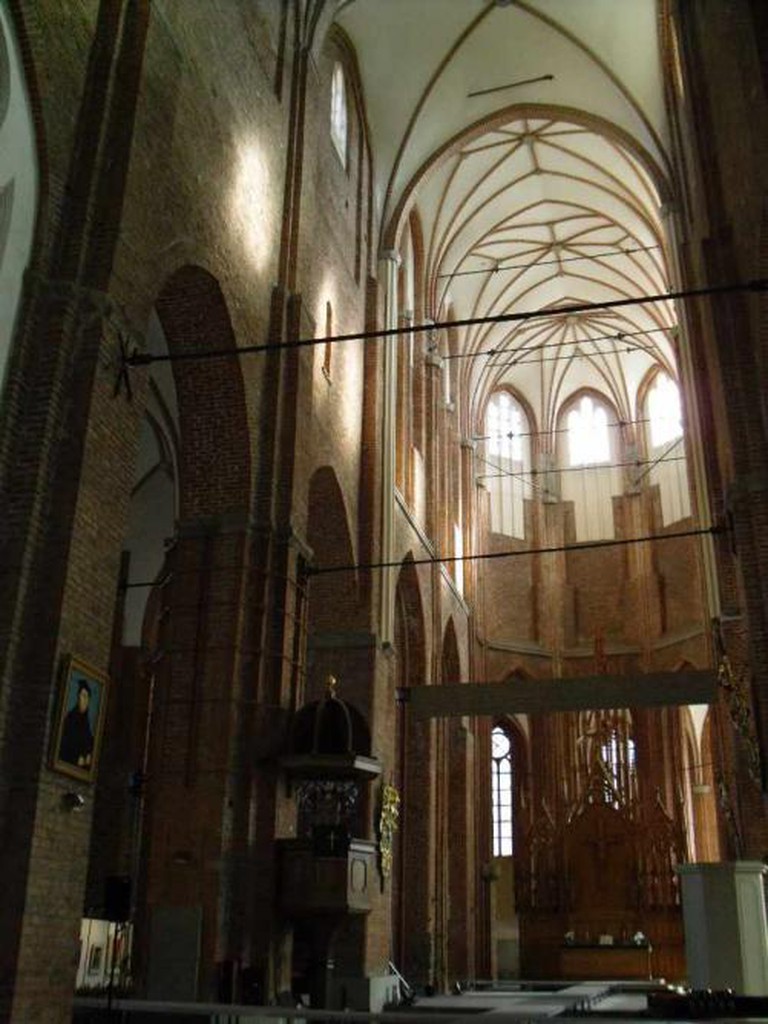 Church of Saint Peter | © Artifex/Wikicommons
One of the finest restaurants in the Old Town, Melnie Mūki serves first-rate steaks in an elegant setting, complete with a crystal chandelier and a smooth live jazz soundtrack in the evening. In addition, it is located right between the Church of Saint Peter and Livu Laukums, a square popular as a hangout for the city’s youth. Melnie Mūki’s excellent wine selection adds to its refined image, but it remains surprisingly affordable, with a three course meal easily costing less than 20€. There are also vegetarian options.
Open In Google Maps
1 Jāņa sēta, Centra rajons Rīga, 1050, Latvia
+37129979729
Visit Website
Give us feedback 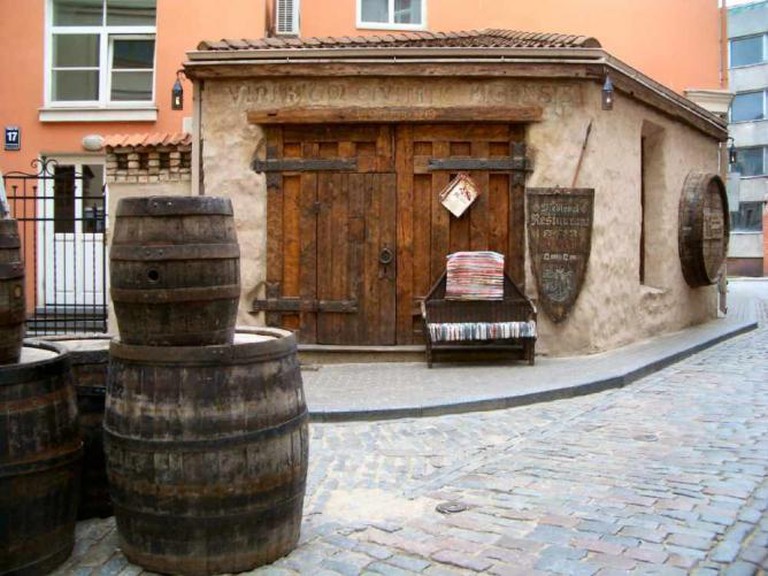 Rozengrals | © ullisandersson/Flickr
No. 1 Rozena Street used to be a medieval wine cellar , all but forgotten until it was turned into a huge medieval-themed restaurant, Rozengrals. The rooms are not truly medieval, but have vaulted ceilings and pillars, all illuminated by candlelight. Waiters even wear period-appropriate costume; it may be touristy, but that doesn’t make it less pleasant. The dishes are medieval too and therefore unsurprisingly meat-heavy, with perfectly cooked duck, rabbit, lamb stews, among others, but also four vegetarian options. The ‘pit-fired meat’ cooked according to a medieval recipe is Rozengrals’ pride, and a must-order.
Open In Google Maps
Rozena iela, Centra rajons Rīga, 1050, Latvia
+37167220356
Visit Website
Give us feedback

Restaurant, Vegetarian, Pub Grub
Facebook
Email
Twitter
Pinterest
Copy link
Share
Map View
Communist-themed establishments are more common than you’d think in the Baltic countries, but as far as we know Austrumu Robeza(‘Eastern Border’) is the only restaurant in Riga dedicated to totalitarianism in general: busts and portraits of Mao, Stalin, and Lenin adorn the walls and teacups bearing the words ‘To Stalin!’ sit on the tables. This alone makes it a fascinating place to visit, however it is also a restaurant in its own right, with simple, affordable fare well-suited to the budget traveler, such as risotto with veal and parmesan cheese or pork steak with lime sauce. There’s also a vegetarian main dish, fried eggplant with tomatoes and goat’s cheese. At the weekend, Austrumu Robeza puts on plays and concerts.
Open In Google Maps
Centra rajons Rīga, 1050, Latvia
+37126527007
Visit Website
Give us feedback

One of the few vegetarian and vegan restaurants in Riga, Fat Pumpkin is a cosy establishment with food that even carnivores will enjoy, as well as delicious smoothies, vegan pastries, and a small lunch menu. It’s a pleasure finding vegan variations on common dishes and desserts, enabling vegetarians and vegans to taste them while providing others with new flavors. For example, at Fat Pumpkin clients can find vegan crême brulée, vegan tiramisu and vegetarian burgers. The staff are extremely friendly, which is a nice plus.

Makonis is operated by a friendly team, who have recently returned from London. Consequently it is quite the international place, with a German chef and staff speaking fluent English, ideal for travelers who don’t speak Latvian. The space itself is tiny but extremely cozy: four tables downstairs and a few more upstairs, with two additional floors reserved for private parties. The lunch menu, available every day until 4pm, changes daily, and the evening menu every week. Many of the items on display are on sale (even the tables).

Restaurant, Russian, $$$
Facebook
Email
Twitter
Pinterest
Copy link
Share
Map View
This restaurant recreates the décor of the restaurant it’s named after. Indeed, the designer, Gunta Lapina, used 19th-century Russian countryside mansions as a model for this restaurant: bookshelves, cupboards, books by great Russian writers or foreign authors popular in Russia, tasseled lampshades, and old photographs are some of the elements of this charming interior. Food and drinks are almost entirely homemade, even the bread, the beer, the pickles, and the liquors. Since Uncle Vanya is a Russian restaurant, classic Russian dishes are on the menu: borscht, of course, but also solyanka, sturgeon caviar, sturgeon, and shchi(cabbage soup)
Open In Google Maps
16 Smilšu iela, Centra rajons Rīga, 1050, Latvia
+37127886963
Visit Website
Give us feedback

Bar, Restaurant, Wine Bar, Wine, Italian, Mediterranean, European, $$$
Facebook
Email
Twitter
Pinterest
Copy link
Share
Map View
For something a little different, head to Easy Wine, a restaurant and wine bar. Wine isn’t such a popular drink in Latvia, though consumption is on the rise, so it can be difficult to find good bottles without breaking the bank and splurging on a famous label. Here over 60 wines can be bought by the glass or by the bottle though. The food is outstanding as well; Easy Wine can stand on its own as a restaurant, with delicious dishes such as salmon tartare with mustard sauce and capers, shallots, creamy avocado and chives.
Open In Google Maps
4 Audēju iela, Centra rajons Rīga, 1050, Latvia
+37125966376
Visit Website
Visit Facebook page
Give us feedback
Give us feedback