Creating a Sustainable Biennial in Riga, a Look at the First RIBOCA 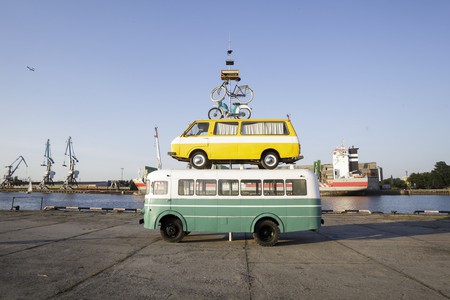 As the first Riga International Biennial of Contemporary Art (RIBOCA) gets underway in Latvia, we take a closer look at how the biennial sets a new benchmark in the age of ‘biennial fatigue’.

At their best, a biennial can bring together disparate ideas and a wide variety of artistic disciplines from different regions around the world to make a cohesive statement. And the first RIBOCA, titled Everything Was Forever, Until It Was No More, certainly lives up to this premise. 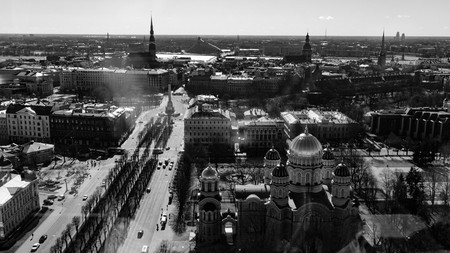 ‘The more meaningful biennials are the ones that engage with the place, the space, the geopolitical dynamics of the city, the country, and the region,’ asserts Gregos.

Not wanting to ‘parachute in and out’ as Gregos puts it, RIBOCA is all about creating a sustainable biennial model that prioritises artists and artistic production. Set up by Russian-Lithuanian Agniya Mirgorodskaya as a global platform for Baltic and international artists, the intention is to take root in Riga and yet be globally reflective, increasing the dialogue between a long overlooked region with the rest of the world. 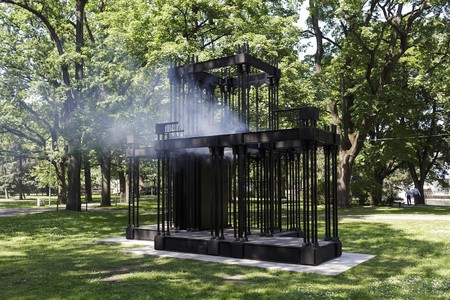 James Beckett's 'Palace Ruin' (20160 outside the Former Faculty of Biology of the University of Latvia. | Courtesy of the artist. Photo: Vladimir Svetlov

As a country that has been consistently occupied since the 13th century, first by the Polish-Lithuanian Commonwealth, then Sweden, and the Russian Empire, Latvia has a verdant history, ideal for curatorial investigation and ripe for the picking by contemporary artists. ‘I’m very interested in moments of historical transition,’ say Gregos. ‘What happens before and after and how this is experienced by the people who live through these moments. A lot of artists in the exhibition are negotiating forgotten histories, looking into a form of correctional historiography.’

Anthropologist Alexei Yurchak’s book, Everything Was Forever, Until It Was No More – from which the biennial takes its name – gives RIBOCA its conceptual foundations as it navigates the paradoxes of the Soviet Union and its collapse. ‘The analogy today is like capitalism,’ says Gregos. ‘No one can imagine that capitalism could collapse, it’s become so widespread, it’s taken the place of socialist governments and countries that were once left wing.’ 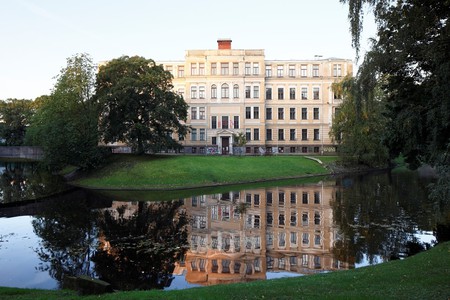 Gregos foregrounds Latvia’s ‘long, rich, layered and very often contested histories’ to explore themes of progress, time, industrialism, economic transition, destruction and obsolescence through the works of over 90 artists – 24 of which are from the Baltic states – at eight sites chosen specifically because of their histories and functions in relation to Riga.

The biennial’s main site, the former Faculty of Biology of the University of Latvia, was once an important, progressive scientific research institution in the Soviet Union. Both a representation of dictatorial rule and innovative discovery, the Neo-Renaissance building, with its abandoned laboratories, has found a new purpose.

Centering around scientific and technological developments as well as corporeal existence, the artworks sited here reflect upon its subsequent impact on the biological and ecological status quo. ‘I’m really interested in how artists talk about the state of the world and are able to bring new knowledge, beyond the known, beyond the expected and also beyond the biased and the polarised,’ says Gregos. 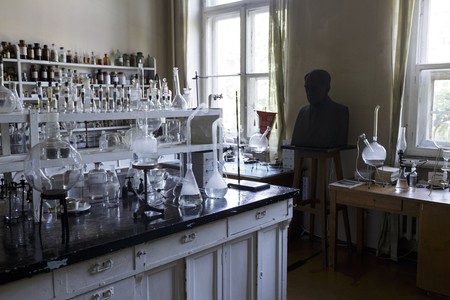 In a former lab, Berlin-based artist Sissel Tolaas has installed bespoke glassware – similar to scientific apparatus – which puff out odours sourced from the Baltic sea. ‘Can a smell molecule give an indication to issues on the ocean that we can’t see or hear?’ Tolaas poses on describing beyond SE(A)nse (2018).

As part of her ongoing project to build a catalogue of ocean molecules that includes the Great Barrier Reef, Costa Rica and the Caribbean, she worked with locals to collect samples from the beaches near Jurmala. ‘It decontextualises reality in a container. I’m trying to develop different ways of dealing with issues of the ocean, engaging people’s emotions and causing action in a different way.’ 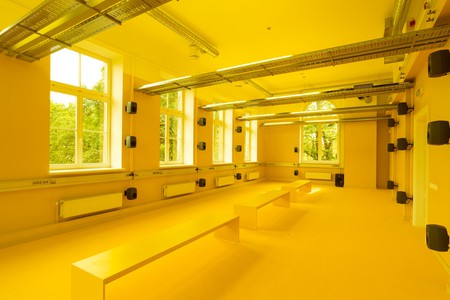 Oswaldo Maciá, The Opera of Cross-pollination, 2018 | Courtesy of the artist. Photo: Vladimir Svetlov

There are a number of evocative interactive installations and immersive video works that invite interaction. Oswaldo Maciá’s olfactory-acoustic installation, The Opera of Cross Pollination, commissioned specifically for the biennial, bombards your senses with audio and defused aromas. Emilija Škarnulytė’s epic video installation, Mirror Matter (2018), uses hypnotic audio to accompany digital renders of scientific facilities, including the Japanese neutrino observatory Super-Kamiokande and The Large Hadron Collider. And Nikos Navridis’ site-specific installation (another for the biennial) All of old. Nothing else ever… (2018) which brings the faculty’s former library back to life but with a twist, making you consider the evolution of printed material, the dissemination of information and defunct inventory processes. 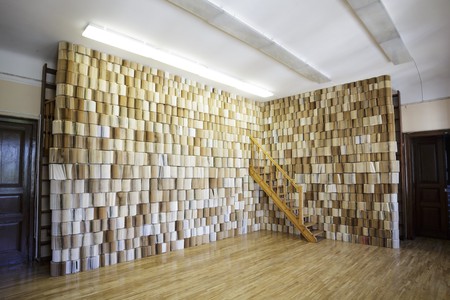 Nikos Navridis, All of old. Nothing else ever…, 2018 | Courtesy of the artist and Bernier/Eliades Gallery, Athens/Brussels. Photo: Andrejs Strokins

From the grandeur of biology faculty, the next venue – if you follow the prescribed route from venues A to H – takes you to the former apartment of Kristaps Morbergs, which overlooks Freedom Square, ‘One of the most symbolic locations in the whole of Latvia because this is where the first manifestations happened for the first national awakening before the collapse of the Soviet Union,’ Gregos says.

Here among the peeling paint and neglected rooms, artists examine the collective experience of change both from a historical and political perspective. Eve Kiiler’s photographic series documents the transformation of domestic architecture post-Soviet rule and Indre Serpytyte’s Pedestal (2017) align archival imagery of statues of Lenin and Stalin from public spaces in Lithuania together. 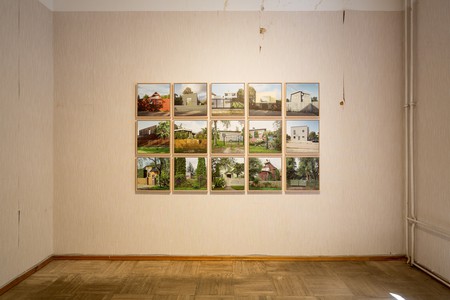 ‘Very often you find “politically engaged” work turns out to be extremely didactic, dry, and very often lacking in challenging or imaginative visual content, so I’m searching for artists who are able to bridge this very difficult gap between form and content,’ says Gregos. There is certainly nothing dry about her selection.

At Andrejsala, once an important industrial trading port, now going through a process of redevelopment, an old boat and two warehouses have been turned into unlikely exhibition spaces for insightful and poignant observations on industrial obsolescence. It’s the perfect location for Jevgeni Zolotko’s eery and disquieting biennial commission, Sacrifice (2018) and Alexis Destoop’s two-channel video installation, Phantom Sun (2017) that fabricates a conflicted ideological narrative in relation to the Norwegian-Russian border. It’s even ideal for Maarten Vanden Eynde’s new work for the biennial, Pinpointing Progress (2018) that visualises the evolution of technological products produced in Riga and exported throughout the USSR. 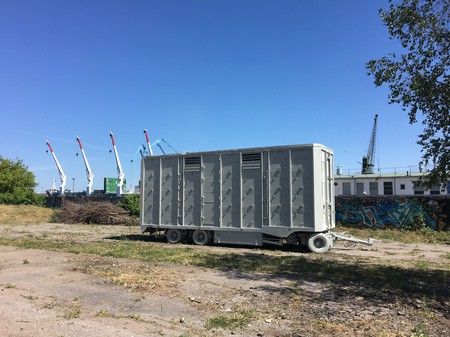 As you navigate your way around the remaining venues that include a former textile factory and Sporta2 square, a new district of Riga, it becomes ever more apparent that RIBOCA is an important moment in Latvia’s history, ‘I feel that this biennial make sense at this particular moment because the Baltic region itself is a locus for global integration, identity renegotiation and economic restructuring because we now are faced with this new cold war,’ says Gregos. ‘Really they are at the forefront of this new debate about progressive liberal democracy however flawed it might be within Europe.’

Riga International Biennial of Contemporary Art is on at various venues around Riga until October 28, 2018.