Winter in the Dolomites: How to Spend Two Days in Corvara 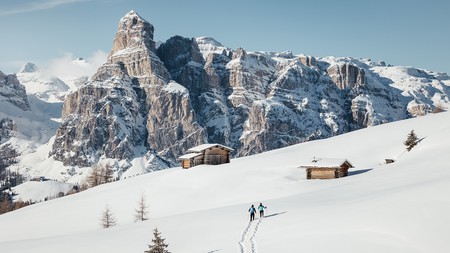 From the soaring parapets of the Marmolada glacier to the frozen waterfalls near Campo Tures, the Dolomites in winter are a spectacle to behold. If you only have time for a fleeting visit, or want to discover the best pistes to carve, head to Val Badia in South Tyrol for a monumental winter break.

Under the stoic gaze of the towering Sassongher mountain, Corvara unfurls in a snow-submerged valley. The village, where they speak the local Ladin language (unique to the region), is the focal point of the Alta Badia ski resort, which is connected to the Sella Ronda circuit. Buy a Dolomiti Superski pass and you’ll get access to more than 1,200km (746mi) of slopes. Beyond reliable snow and unsurpassed scenery, there is also an exceptional line-up of slope food: 40 remote mountain huts conceal a treasure trove of sumptuous cuisine. What are you waiting for?

Start your morning by greeting your guide at Corvara Ski School. Founded in 1933, it was the first in Val Badia, and with nearly 90 years of teaching history and 91 present-day instructors, it offers excellent tuition, so you’ll be in safe hands no matter your skill level. The Alta Badia ski area is a rolling plateau interwoven with a 130km (81mi) network of (predominantly) blue and red pistes, offering gentle skiing for beginners, intermediates and families. Your attention will be seized by the staggering scenery: stark limestone pinnacles strewn with snow, alpine glaciers and frozen falls abound. The solid selection of nursery slopes and wide, mellow blues that sweep past the village of Colfosco allow beginners to flourish. 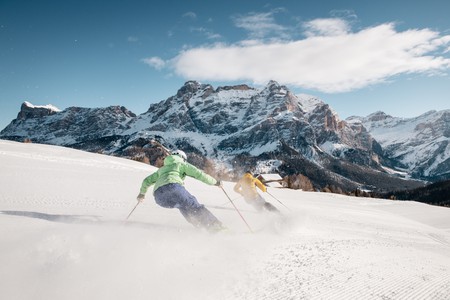 The Alta Badia is perfect for first-time skiers | © Alex Moling

Bolder terrain unfolds in neighbouring Arabba. Soaring Marmolada, at 3,343m (10,968ft) the highest mountain in the Dolomites, can be reached via cable car from Arabba or Porta Vescovo; begin your breathtaking red-run descent at 3,269m (10,725ft). Experts should head for Mount Lagazuoi, starting at the Falzarego Pass, 20km (12mi) from Corvara. From the summit, take the famous 8.5km (5mi) Armentarola descent to experience one of the most dazzling ski runs in the world. The slope unrolls below the Fanes massif, flowing past icy cascades, craggy ridges and centuries-old stone pines. From an initial steep descent, the route ends gently at Sass Dlacia, where a rustic taxi awaits: a rope tow pulled by a horse-drawn sleigh returns skiers to the Armentarola ski lift. 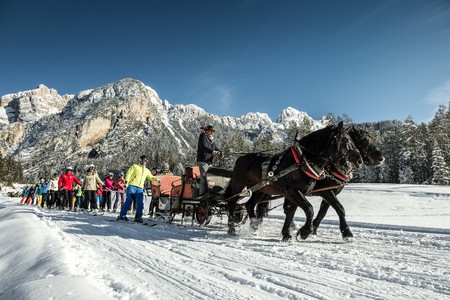 Catch a taxi with a difference at Sass Dlacia | © Alex Moling

After lunch, if you’re done with the slopes, trade in your skis and learn more about local Ladin culture. The Ladin Museum in Ciastel de Tor offers an extensive history of the Ladin people and their unique language, with exhibits on archaeology, geology and folk treasures – all within a castle that dates back to 1230. Nearby, the Ladin Museum Ursus Ladinicus is dedicated to the eponymous prehistoric cave bear that lived here around 40,000 years ago, and provides a fascinating insight into evolution in the Dolomites. 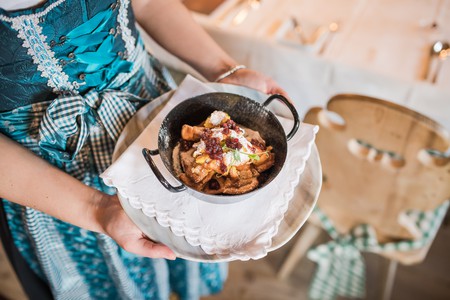 While travelling around the region, keep an eye out for Ladin farms or viles, which are scattered throughout Val Badia. Made up of three distinct parts – the ciasa (living quarters), the majun (stables) and the tablé (silo) – les viles have survived thanks to the ancient law of “closed farms”, in which farming land is handed down to the eldest son. Communal space, shared by numerous homesteads, typically contains a fountain, drinking trough and a wood oven.

Restaurant, Italian
Facebook
Email
Twitter
Pinterest
Copy link
Share
In a hollow where a black, red and blue run converge, accessible at lunchtime via the Colfosco gondola, you’ll find this traditional mountain refuge. Inside is a gourmet restaurant called La Stüa – stüa in the Ladin language refers to the intimate focal point of the home, typically stove-side, where families meet to warm themselves. Aptly, this traditional stube is cosy and inviting, evoking the distinctive rural character of bygone times. You’ll encounter Ladin dishes alongside Italian ones; the squash gnocchi with parmesan fondue is a revitalising antidote for the cold.

For blue-sure beginners, take your skis to the top of Col Alto this morning to discover the wealth of leisurely runs behind its crown. The undulating Pralongià plateau, known as the amphitheatre of the Dolomites, offers broad, sweeping pistes enclosed by forested slopes and spectacular spires. But if you have intermediate skills and are up for a challenge, the sublime Sella Ronda awaits. 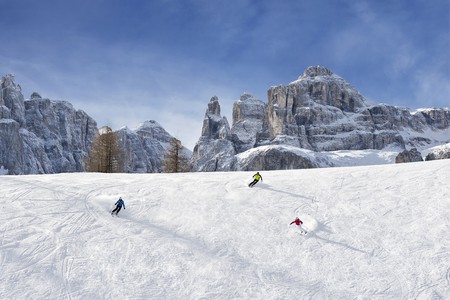 The Sella massif is a flat-topped citadel surrounded by four Ladin valleys: Badia, di Fassa, Gardena and Fodom. In summer, you can traverse a marathon of hiking and biking trails, but, in winter, you can ski the entire circumference using the Sella Ronda ski lift carousel – encompassing 23km (15mi) of downhill skiing in both clockwise (orange route) and anticlockwise (green route) directions. You’ll spend approximately 2 hours on lifts and 1½ on pistes if you’re a confident skier; expect to achieve the full loop in 3-6 hours. If this is your first attempt, the green route is slightly easier. 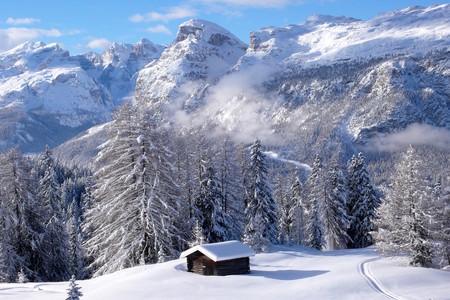 If you’d like an afternoon free of skis, pay a visit to some of the region’s impressive churches. The Santa Croce Sanctuary, a pilgrimage site consecrated in 1484, can be found in the Fanes-Senes-Braies Nature Park below the Sas dla Crusc peak (2,907m/9,537 ft). It can be reached by chairlift or via a winding nature trail that begins at San Leonardo in Badia. Once at the top, the neighbouring, family-run refuge offers delicious local specialities such as Kaiserschmarren (sweet pancake) with blueberry jam. 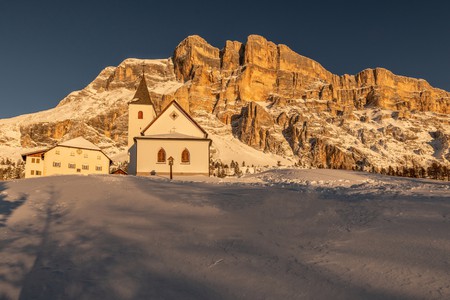 Also worth a visit is St Barbara’s Chapel, half an hour from the centre of La Valle. You’ll find this small church settled atop a bluff; the scenic path to its door passes pastoral farmsteads, a larch forest and the Memento Vivere contemplation trail. The quaint edifice, with its polygonal apsis and exterior frescoes, dates from 1491. Back in Corvara, St Katherine’s of Alexandria is the oldest church in the area, first mentioned in 1347. It was built in late gothic style, and inside you’ll discover some well-preserved murals depicting the life of the saint, and a winged altar dating from 1520.

Restaurant, Italian, $$$
Facebook
Email
Twitter
Pinterest
Copy link
Share
The original sledge lift reached the crest of Col Alto in 1938, and was replaced in 1947 by the first chairlift in Italy. Today you can take the much sturdier Corvara cable car; a few minutes’ ride offers astonishing views of the surrounding limestone spires. The Col Alt restaurant, a sidestep from the top, embraces the panoramic scene from a large, wraparound terrace. Here you’ll find traditional, rustic dishes – don’t miss the canederli (fried bread dumplings).

Where to stay in Corvara 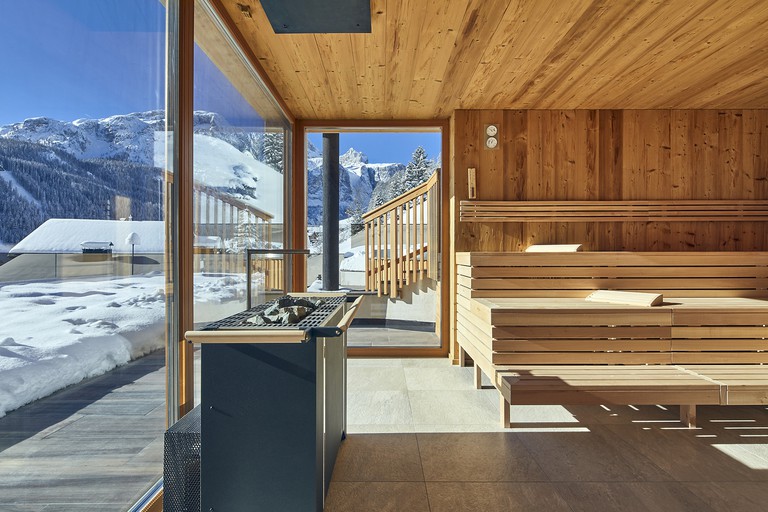 Perched on the flank of its namesake, Hotel Sassongher overlooks the valley below. This five-star hotel has been owned by the Pescosta family since 1933, and reflects 80 years of loving restoration through traditional South Tyrolean pine furnishings and curious decor – look out for doll collections, hunting trophies and ceramic stoves. Savour Italian and Ladin flavours in the half-board restaurant, and eat with mountain views or from within a cosy 16th-century stube. Soak in the views from your private balcony, or from within the glass-fronted sauna and luxurious open-air hot tub at the rooftop Sky Spa.
Give us feedback