Why the Newly Discovered Mansions in Pompeii Are an Unusual Discovery 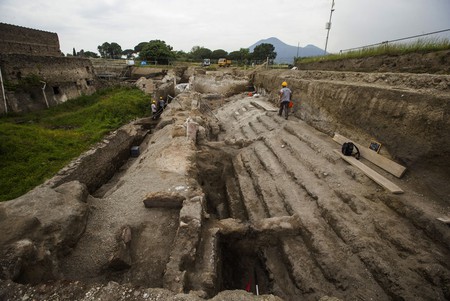 In 79AD, Mount Vesuvius erupted, wiping out the entire city of Pompeii. The eruption destroyed what was once a thriving port and trading point, burying the city and its inhabitants under a thick layer of volcanic ash – its smothering properties preserving the site, almost in freeze-frame, for centuries. Rediscovered in the 16th century, the site of Pompeii was first excavated in 1748, but archaeologists are still making fascinating discoveries today.

Working on a previously unexcavated part of the site, experts have just uncovered an alleyway of buildings, thought to have been mansions or grand houses, with three large balconies still intact. Dubbed the ‘Alley of Balconies’, the unusual find was announced on the Pompeii Archaeological Park’s Facebook page and hailed as a “novelty” for the site, which is still not fully excavated. The buildings still display their distinctive Pompeiian red colour, almost exactly as the ancient inhabitants of Pompeii would have seen them. 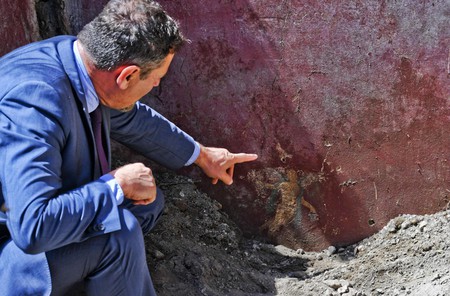 Massimo Osanna points out a fragment of fresco discovered during excavation of the 'Vicolo dei Balconi', or Alley of Balconies. | © CIRO FUSCO / EPA-EFE / REX / Shutterstock

The archaeological site’s director, Massimo Osanna, told newswire ANSA: ‘For Pompeii, conservation of the upper storey is a rarity’, highlighting the importance of the discovery.

After the eruption in 79AD, it wasn’t just volcanic ash that enveloped Pompeii. Pumice stone and large blocks of rock also showered down on the city, destroying roofs and the upper, most vulnerable, floors of buildings. Interestingly, most people didn’t die from ash suffocation, but from the extreme and instant heat carried from the volcano in what’s known as a pyroclastic flow. Remarkably, archaeologists also found amphorae jugs used to store wine on one of the balconies. The conical clay urns had been turned on their side, probably left to dry out in the sun. 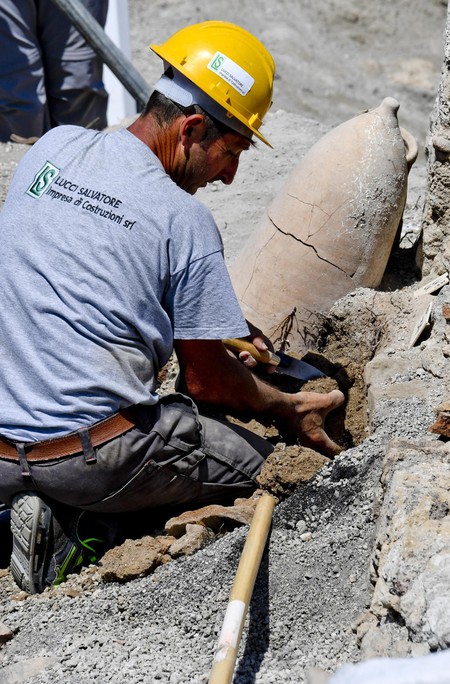 Once the area has been fully excavated, restoration work will take place on the balconies. They will then be opened up to the public as part of a new tour route at the site that connects Via di Nola (a main thoroughfare passing east to west) with Vicolo delle Nozze d’Argento (which takes its name from a spectacular private residence, decorated with ornate frescoes).

The discovery takes place after a string of recent finds in the ancient Roman city. Earlier this month, archaeologists announced they were able to cast, for the first time, the complete figure of a horse that died at the site. In April, a child’s skeleton was found, which was the first unearthed at the site in around 50 years.

Did you know that Pompeii wasn’t the only city ravaged by Vesuvius in 79AD? Check out these other historical sites near Pompeii.