Where To Enjoy the Best Coffee in Rome: An Expert’s Guide 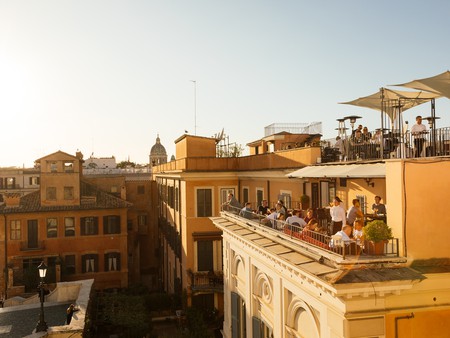 While Italian coffee culture has inspired much of the world, it is still entirely unique. Here, Linda Massi, who is from Rome, explains how to enjoy Italian coffee and asks café owners Laura Barbieri and Marta Troia to share the best coffee shops in Rome.

Italians are used to downing espressos at the counter in little coffee houses – called bars – that often don’t even have tables. But the growing number of freelancers, students and international visitors in big cities such as Rome is influencing the traditional drink-and-go Italian coffee culture. Now, venues are adapting, creating well-decorated spaces to sit, sip and relax.

Laura Barbieri and Marta Troia, owners of the succulent-filled café Materia, both come from creative backgrounds (fashion, illustration and interior design). Fuelled by their love of all things beautiful and, of course, coffee, they decided to join forces to give life to a little oasis of perfectly roasted brews in the heart of Rome.

“In Italy, we’re lucky to have a great tradition of coffee and bars. The popular thing to do is to drink a good espresso at the counter with a little pastry, and we still find it a great way to start our day,” explains Barbieri. “But we’ve both lived in London during different times of our lives – and we love travelling – so once we moved back to Rome and realised we were missing a coffee shop like the ones we used to stay in for hours, we decided to make our own.” 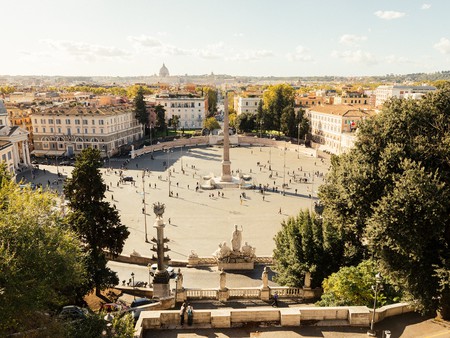 Just like everything else that concerns eating and drinking, Italians have a lot of rules about coffee. Espressos are supposed to be sipped while standing at the counter before work, exchanging a few words with the barista about the weather, and the only time you can sit down in front of a tiny cup is right after a meal. There’s no need for to-go cups, as one ounce of black, creamy coffee is easy to gulp down (there’s a reason why they’re called espresso shots).

Italy is often recognised as the birthplace of many of the coffee drinks everyone knows and enjoys. However, many of them mean something completely different here and are to be consumed following specific guidelines. After all, food is a serious matter in this country.

To start, decadent drinks such as cappuccinos, mochas and lattes are enjoyed only with breakfasts, before 2pm. They’re pretty hearty, so not the best way to finish off an already carb-heavy lunch or dinner. If you ask for a mocha, you’ll get a confused look as a Moka in Italy is a particular coffee pot you put on the stove; if your sweet tooth is demanding chocolate with your caffeine fix, you should ask for a marocchino. Latte translates to milk, so you should ask for a caffé latte to avoid disappointment, but bear in mind many baristas could still be confused by the fact that you didn’t just order a cappuccino.

After lunchtime, the only coffee drink that Italians deem acceptable is straight espresso. If you hate your coffee black, there’s a loophole: order a macchiato. It is like a tiny cappuccino served in an espresso cup and bears very little resemblance to the homonymous caramel creations found elsewhere in the world. 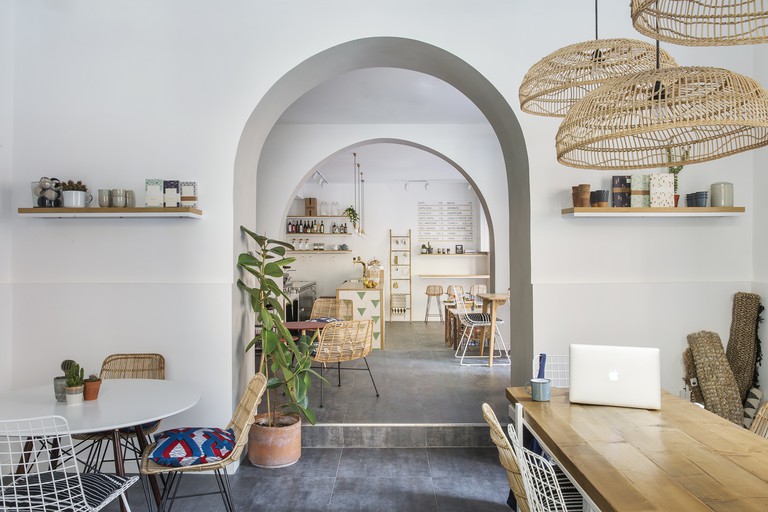 Sit back, relax and sip on some coffee at Materia | Courtesy of Materia

“At first we just wanted a space made of all the things that make us feel good. Then we ended up creating a place where we would love to spend our time and where we would buy everything,” Barbieri and Troia tell Culture Trip about their café, which has become a landmark for students and creatives in the city. Here you can sit surrounded by beautiful design objects (all for sale) and sip a coffee. The space also hosts a variety of events from breakfast concerts to literary talks. And your brain won’t be the only thing to be fed here: “You need to try our apple pie with almond and cinnamon crumble with your coffee – it’s the best!”

Considered by many to be the oldest bakery in Rome, Pasticceria Regoli is a proper old-school bar and the perfect place to try an authentic Roman-style coffee. This charming little coffee house is still a family-owned venture, as it’s been for the past century. “There’s something so nostalgic about it. It reminds me of Sundays with my family,” says Troia. If you’re still wondering why Italians typically choose a simple espresso, accompany it with a maritozzo, a sugary bun stuffed with whipped cream; it’s a traditional Roman pastry and pairs perfectly with the bitterness of the coffee.

If you’re seeking a coffee shop with a chic, typically Italian vibe, Bompiani is the place to go. With sleek black-and-white interiors, the scent of fresh coffee in the air and gourmet pastries in glass cases, this venue is the height of sophistication. Don’t be fooled by its appearance though – a coffee and a cornetto (the Italian version of croissants) will come in at a very budget-friendly €2 (£1.70) or less. The cornetto is the star of the show here, with orange zest and bourbon in the dough, and many believe it’s the best in all of Rome. Barbieri agrees: “It’s the place to go for a quick coffee and a pastry. Sometimes that’s all you need to turn your day around!” 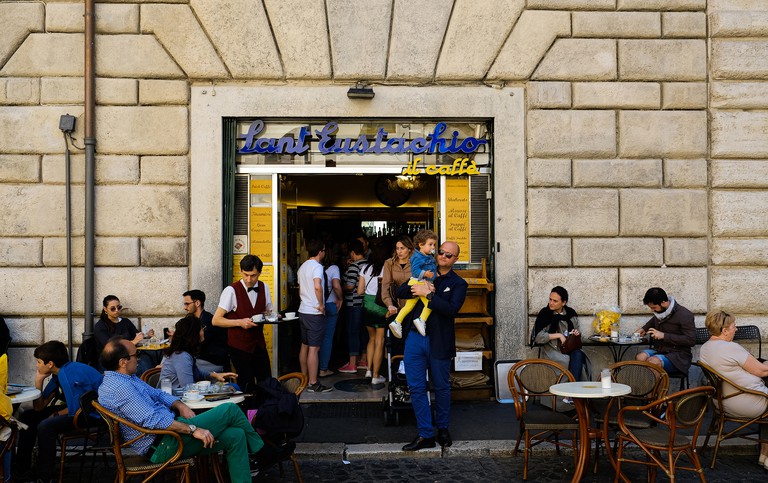 Sant’Eustachio il Caffè is known for its ‘grand cafe’ | Courtesy of Sant’Eustachio il Caffè
You know a coffee shop is the real deal when it’s selling its own roast. Sant’Eustachio takes pride in only serving Fairtrade coffee and taking part in projects to improve the condition of workers in the coffee production chain. Barbieri points out, “The coffee industry can get very ugly. It’s important to take stands against it and to be conscious when sourcing the raw material.” Sant’Eustachio is famous for its grand cafe, an incredibly creamy espresso, that’s much larger than usual; the recipe is so secret that the coffee machines are covered so you can’t see what baristas are doing.
Open In Google Maps
82 Piazza di S. Eustachio, Roma, Lazio, 186, Italy
+390668802048
Visit Website
Visit Facebook page
Give us feedback 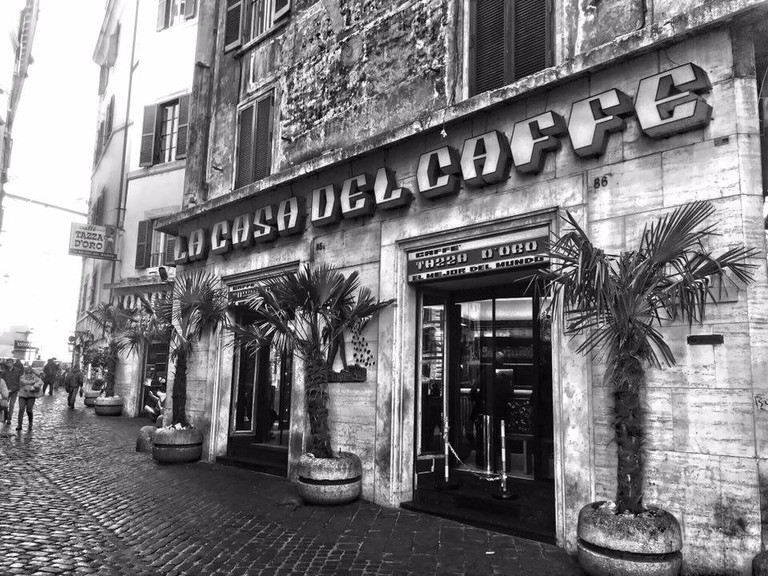 La Casa del Caffè Tazza d’Oro could be mistaken for a tourist trap because of its location right in front of the Pantheon, but it’s far from it. “Just go there after 7pm or early in the mornings, and the tourists should be gone,” says Barbieri. Romans love this venue, especially during the summer when it starts selling its city-famous granita – basically a coffee slushie covered in whipped cream. La Casa del Caffè Tazza d’Oro is also a coffee snob’s favourite, selling its own roast, humbly named La Regina del Caffè (the Queen of Coffee) that the founder created in the 1950s after taking numerous trips to South America.

In the heart of the Esquilino neighbourhood and a stone’s throw from Termini Station is Panella. This 90-year-old bakery specialises in decadent coffee drinks, mixing cream, eggnog and even custard with espressos and cappuccinos. But Panella’s pièce de résistance is its spiked coffee, which is especially popular in Rome during the winter. “Our grandparents used to drink coffee and brandy daily, for breakfast. Now I don’t have quite the stomach for that, but they’re great on a dark afternoon, as a warm pick-me-up,” Troia explains. The most notable drink on the menu (and the one you need to try if you visit) is the cappuccino dei carbonari – a boozy cappuccino spiked with brandy and rum, sweetened with a mix of egg yolks and whipped cream. 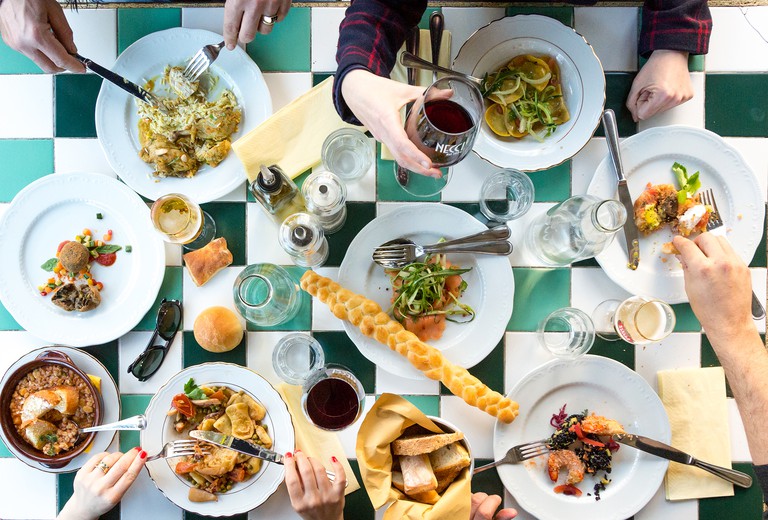 In addition to coffee, Necci dal 1924 offers a selection of meals, desserts and other drinks | Courtesy of Necci dal 1924
Necci dal 1924 is a second home for coffee lovers in Rome. With modern, stylish interiors and reclaimed wood tables, it only makes sense that it would be set in the ‘Brooklyn of Rome’, Pigneto. Barbieri says visitors should head straight to the outdoor seating area: “Its outside space really makes it. There’s nothing like sipping coffee under a tangle of ivy and fairy lights.” Necci’s signature drink, the caffè pugliese, takes inspiration from southern Italy, mixing iced coffee with almond syrup. With its perfect balance of sweet and bitter, it’s a welcome drink during Rome’s hot summer days.
Open In Google Maps
68 Via Fanfulla da Lodi, Roma, Lazio, 176, Italy
+390697601552
Visit Website
Give us feedback

Being artisans themselves, the owners of this café and German-style bakery named their business after the patron saints of artisans. The first thing you’ll notice is the different types of bread (usually over 15) lining the walls, and the coffee is just as noteworthy. “The cappuccinos are extra foamy, and the smell of fresh bread makes it oh so cosy,” says Barbieri. Try the typical Italian ‘grandma-style’ breakfast: bread, butter and jam, but served on gourmet raisin-and-cinnamon bread with home-made raspberry compote.

This dark, edgy space decorated with mismatched furniture and old-school tattoo-style murals may not be the most obvious place to start your day. Rino Montesacro makes it its mission to be cool in a slightly rebellious way – something it achieves with its vast vinyl collection that’s always playing and it infamous neon sign. Spelling out stronzi (assholes), it’s a tongue-in-cheek piece of decor that’s obviously the most Instagrammable feature of the place. However, Rino Montesacro doesn’t emphasise style over substance. “It’s one of the few places in Rome where you can find drip coffee, so enjoy this slight deviation from your espresso tour,” says Troia.

Bar, Italian
Facebook
Email
Twitter
Pinterest
Copy link
Share
Map View
Piazza di San Calisto, in the heart of Trastevere, looks like it’s straight from a postcard, with pale-yellow walls, cobbled pavement and clotheslines full of laundry left hanging to dry and fluttering in the breeze. That’s where you’ll find Bar San Calisto, an institution so big in Rome that when it was forced to close for three days in 2018, it made the news. “We love the Calisto as it’s right in the heart of Trastevere and its day-to-day life,” says Barbieri. “It’s such a historical place for Romans – it never gets old.” In the most traditional place of all, there’s only one thing to order – a simple espresso.
Open In Google Maps
3 Piazza di San Calisto, Roma, Lazio, 153, Italy
+39065835869
Give us feedback 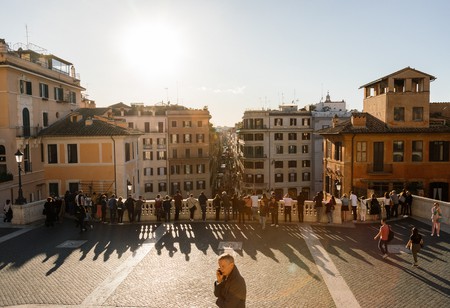