What's on in Rome, Italy, in December 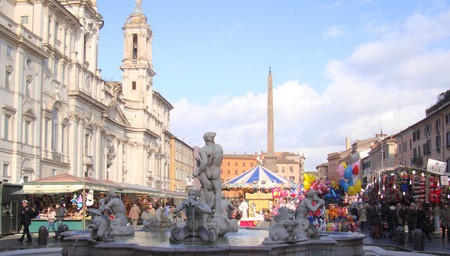 While Christmas decorations appear on shelves as early as October in the UK, Italy steadfastly sticks a more traditional schedule when it comes to the festive season. Lights and decorations might pop up at the end of November but it’s the Feast of the Immaculate Conception on December 8 that really marks the beginning of the festivities. Discover what’s on going on – Christmas-related or otherwise – in December in the Eternal City.

A Victorian afternoon tea | © Courtesy of Babingtons, The Vatican at Christmas | © Giuseppe Milo/Flickr

The 32nd edition of performance art festival Romaeuropa draws to a close at the beginning of December. The final events take place at Palazzo delle Esposizioni on Via Nazionale with ‘Where Are We Now?’ a lecture on the superintelligent technologies that drive humanity, and ‘Cracking Danilo Rea’, a piano and electronic music concert examining the relationship between musician and machine.

RIFF, or Rome Independent Film Festival, continues for its 16th edition. The festival aims to connect young filmmakers with industry professionals and the realities of film production and distribution. Head to the Casa del Cinema in the grounds of Villa Borghese for screenings, and check out the website for details of workshops, retrospectives and exhibitions.

Established in 1893, Babingtons is a traditional English tearoom in the heart of Rome. Over 40 kinds of loose-leaf tea, finger sandwiches, scones and homemade biscuits, cakes and pastries are on offer all year round, but December 4’s Christmas Victorian Tea is especially luxurious. Sip on special festive blends of tea from Victorian cups and nibble on smoked salmon tartines, Christmas tree-shaped sandwiches, mince pies and gingerbread cookies – all washed down with some traditional mulled wine.

📅 December 6 – December 10
For its 16th edition, the Rome book fair moves to a new location of the Roma Convention Centre – otherwise known as La Nuvola, or the cloud, due to the building’s distinctive design. For €8 visitors can meet authors and industry professionals, attend talks and workshops, and shop for books from more than 400 publishers.

The tradition of placing a giant Christmas tree in St. Peter’s Square dates back to 1982 during the pontificate of Pope John Paul II. This year, the tree will be a 28-metre red fir donated by the archdiocese of Elk, northeastern Poland. The switching on ceremony will take place at 4.30pm on December 7 and alongside the tree will stand a larger than life-size nativity scene crafted by artisans from the nearby Campania region.

Feast of the Immaculate Conception

Often mistakenly thought to mark the virgin conception of Jesus, the Feast of the Immaculate Conception actually celebrates the conception of Mary – free from original sin as the future mother of Jesus. Since 1953 the pope has visited the Column of the Immaculate Conception near Piazza di Spagna to commemorate the event. He offers prayers to the crowd and leaves flowers at the base of the column, while firefighters place a wreath up top on the Virgin Mary’s arm.

Natale all’Auditorium, or Christmas at the Auditorium Parco della Musica includes a series of festive concerts, markets and special events geared towards the whole family throughout December. Look out for classic Christmas choirs, gospel performances and Disney’s Fantasia live in concert performed by the Santa Cecila Orchestra.

Piazza Navona’s Christmas Fair | © MollySVH/Flickr, One candle of the menorah is lit each evening during Hanukkah | © s2dent/Pixabay

In recent years Rome’s Christmas Market has been dogged by controversy over the decreasing number of permits issued to vendors – and most of those permits have been awarded to vendors from the same family. As ever, the details remain foggy until the last minute, but organisers usually manage to pull together a vaguely festive atmosphere with a carousel, Christmas tree and nativity scene.

Lighting of the menorah

Hanukkah (sometimes known as Chanukkà) lasts for eight days, with dates dedicated by the Hebrew calendar. Celebrations in Rome begin with the lighting of a giant menorah in Piazza Barberini on the night of December 12. Every evening, another candle on the nine-branched candleholder is lit.

Tickets for Christmas Eve Mass in St. Peter’s Basilica are free but incredibly difficult to obtain. As the Vatican recommends applying for tickets no less than two months in advance, the easier option is just to show up at St. Peter’s Square and join the crowds watching the ceremony on the big screens.

Marathon Runners in Rome | © Philippe Roos/Flickr, A performance of The Nutcracker | © Larry Lamsa/Flickr

On Christmas Day the Pope gives a special blessing to the crowd at St. Peter’s Square from the loggia balcony of St. Peter’s Basilica. The Urbi et Orbi blessing takes place just twice a year, at Christmas and Easter, and is addressed to the citizens of Rome (urbi) and of the world (orbi). It’s free to just turn up but prepare for a massive crowd.

After December’s excesses and arrival of the new year, thoughts turn to keeping in shape. Even if the year end hasn’t been the healthiest, there’s still chance for redemption with a 10km run through Rome’s historic centre. Beginners can take things easier and sign up for a 5km route, or just cheer on the runners from the sidelines.

Set during Christmas Eve, the Nutcracker is the ultimate show for the festive season. This two-act ballet might not open until December 31 this year but just treat that as an excuse to eke out the celebrations even longer. The show takes place at Teatro Costanzi – the main auditorium at Teatro dell’Opera di Roma. Get tickets on their website as this seasonal show is always popular.

For more ideas on how to celebrate Christmas in the Eternal City, click here.